A Fifth of Doom 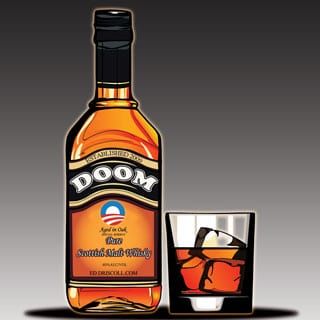 I didn’t leave out any zeroes, did I?

Why the explosion of a third of a trillion dollars on Thursday? That’s the day Congress agreed to raise the debt limit, an action which President Obama had assured us “wouldn’t raise the debt.” But — surprise! — our debt popped up like the Treasury Department had released a beach ball from the bottom of the deep end of the swimming pool.

The big float was due entirely to the debt ceiling, which forced Treasury to resort to “extraordinary measures” to keep the books balanced, as Congress kept spending money the Treasury didn’t have. This year’s deficit — the total added to the debt — is expected to be “only” $744,000,000,000, or 4.4% of GDP. The economy is expected to grow less than 2.5% this year. What that means is that although President Obama loves to take credit for shrinking the deficit he caused to balloon, our total indebtedness is still growing faster than the economy.

Let’s look at the problem from one more angle. The U.S, economy is so weak, it can’t even produce mild inflation when the Federal government conjures up nearly two trillion dollars of make-believe money in a year.

And still the economy remains on trillion-dollar life support.

● Encouraging Dependency. The Department of Health and Human Services has a budget in 2013 of $941,000,000,000. If HHS were a country, it would be the 16th richest in the world, between South Korea and Indonesia. If HHS were a state, it would be bigger than any of them except for California, Texas, and New York. HHS is bigger than the economies of Vermont, North Dakota, Montana, Wyoming, South Dakota, Alaska, Rhode Island, Maine, Idaho, New Hampshire, Delaware, West Virginia, Hawaii, New Mexico, Nebraska, and Mississippi combined. The District of Columbia is about the same size as HHS — and you can’t imagine that’s a coincidence.

● ZIRP. The Fed’s Zero Interest Rate Policy is supposed to make borrowing cheaper, but instead it’s made saving more expensive. People — especially people on fixed incomes — have to sock away more and more money to make up for the lost interest on their deposits.

● Concentration of Wealth. D.C. and its environs are now some of the richest in the country. Many of the country’s best go there not to create wealth, but to redistribute it. We’re undergoing a disastrous intranational brain-drain.

● Anemic Productivity Growth. Productivity growth is the real secret to wealth creation, but Bill Clinton’s Community Reinvestment Act, combined with Alan Greenspan’s and Ben Bernanke’s easy money policies, diverted trillions of dollars into housing — and houses are not productive assets. Instead of figuring out inventive new ways to create wealth, our best finance guys were coming up with inventive new ways to create debt.

● Obamacare. We’ll never know how many full-time jobs were lost, how many will never be created, or which small businesses will be induced to stay that way instead of pursuing robust growth. But Obamacare is just getting started, and already it’s turning us into a part-time nation.

That’s not all, of course. There’s higher taxes, the regulatory explosion, the chaos on Capitol Hill, Dodd-Frank, and the administration’s war on cheap energy, to name five more. Least defensible of all might be Obama’s hectoring of job creators, on par with FDR’s slander of businessmen as “malefactors of great wealth.” I’ve noticed a “screw you, too, buddy” attitude from local businessmen toward the president; they’d rather sit on what they’ve got than risk any further confiscations or demands. And I suspect that attitude isn’t limited to my little mountain neighborhood.

What’s an otherwise optimistic American to do? I joked on Scott Ott’s PJTV Trifecta segment last week that I was spending everything on liquor and ammo. But after writing this column, I don’t think I’m joking anymore.