I’ve read discussions about President Obama for the last two years — is he a villain or a fool? Both or neither?

The answers vary and make for heated debate, but sooner or later we have to admit neither covers all facts. For instance, neither villain nor fool covers his odd, time-displaced “Sputnik” moments: his obsession with unionized labor, or his fascination with trains, or his commitment to the SALT treaty, or his view of Cleveland as a cutting edge technological center, or his odd certainty that cars getting eight miles per gallon throng our highways.

All through the last two years, I’ve been sure this was all a movie I’d seen before. I was right.

Remember how in Jurassic Park, Michael Crichton had dinosaurs recreated from dinosaur DNA frozen in amber and coupled with frog DNA? Remember how it all went awry because these time displaced creatures couldn’t safely exist in the modern world?

Jurassic President starts with the soft-lighted comparisons between Obama and FDR leading up to the 2009 swearing-in. People who weren’t on board with the ethos of Obama’s campaign rolled their eyes and mumbled things like depression chic and there they go again, but I submit to you that Obama believed it. He not only thought he was the new FDR, he thought the world wanted and needed a new FDR. He knew FDR was the change we’d all been waiting for.

Other reports followed, such as that he had decided to run for president to undo Reagan’s presidency and get us back to where we’d have been if Carter had been elected a second time.

I know right about this time, you’re scratching your heads and wondering how he could mean this nonsense. I think the sheer absurdity has kept us from seeing Jurassic President for what he is. Because here, in the early 21st century, we have our doubts about how good FDR was for the country after all and, frankly, we’ve been making jokes about Jimmy Carter since — well, since Jimmy Carter was president.

But Obama is not in the early 21st century, or not in the same 21st century the rest of us inhabit. Instead, he’s preserved in the amber of an echo chamber where the romanticized version of the thirties seen through the new-agey 1970s is paradise. In his circles, denying this vision is akin to insisting the sky is made of cheese.

I don’t share his view, but I can understand it because we do move in intellectually similar circles. 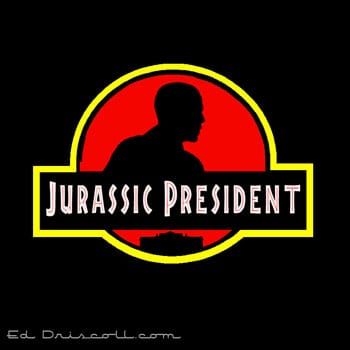 As an author and, further, a science fiction author, and as someone who has moved in and out of academic circles over the years, I know that artists, academics, and self-described intellectuals have self-selected themselves into an almost parallel universe of leftist chic and wishful thinking.

In that universe, if only Carter had served a second term, we’d have all-green-energy, caring, helpful, gentle, earth-loving communities, no competition, and a mandated minimum wage of $100 per hour that somehow works perfectly and doesn’t bankrupt any businesses.

How wonderful it all would be depends on how far left the thinker is, but you’d not be out of place insisting that, say, instead of falling, the USSR would have opened up to the world and reformed their model into an utopia of “true communism.” (A total lack of contact with history, economics, and practical realities helps in believing all this.) Ronald Reagan had never been elected…

I submit to you that Obama was raised by people who believed all of this with the intensity of messianic religious faith. Being about my age, Carter versus Reagan was the electoral contest that ushered him into adulthood.  Unlike me, because of his upbringing, he saw the results as others view the expulsion from earthly paradise.

He heard all our economic and social problems had to do with the weakening power of unions. He heard our trimming back of the social net made us harsher and “meaner” than other nations in the world. (That’s something that erupted from his wife’s mouth during the election campaign).  He heard that Reagan would bring about another war and only preemptive surrender would save humanity. He heard — and believed — that our loss of close-knit communities had to do with the evil and selfish Republican policies. (Instead of the automobile, suburbs, technology, and a hundred other things.) He heard we needed someone to save our soul; to take us back to the time of FDR, or at least Jimmy Carter.

My experience was different. I arrived from Portugal as an exchange student in 1980, bringing with me the normal European prejudices. Jimmy Carter had been painted in Europe as a level-headed leader, a compassionate statesman. But all the promotion in the world couldn’t survive watching the man give speeches, or hearing of the infamous killer rabbit incident. And my European view could not survive coming in contact with American history books, which even then glorified FDR, the whole “the government saved us from the Depression” mythology.

I didn’t object to the portrayal of FDR. I simply was not economically literate enough.

However, I was savvy enough to know propaganda when I read it.  I was disturbed by the palpable longing these texts revealed for an America in the 30s — an America that probably never existed. Even then it seemed to me what they promoted meant turning the clock back to a simpler — and dirtier, poorer, and more brutal — world. I could see we’d got from the ’30s to the ’80s through technological and social changes. This meant the changes weren’t the results of politics and couldn’t be undone by politics. The Democrats could pine for and promise the close-knit society of the ’30s, but they could not bring it back.Even if the ’30s were desirable (I prefer today), they couldn’t put the genie back in the bottle.

Obama doesn’t seem to have ever realized this. He moved in more rarefied circles than the Ohio suburb where I finished high school. You could say he was exquisitely educated not to see the holes in the myths about FDR.

He never got to be a normal person, in a normal environment. His isolation, as the product of a biracial couple, and two broken families, might also have made it harder for him to distance himself from the one security he had — the security of his echo chamber that surrounded him like a an amber bubble encasing dinosaur DNA.

I’ve read somewhere that you simply can’t make large changes in life outlook after 45. I’m not sure that’s true. I could give several examples of people I know who have changed their entire outlook on life after that age.

It is, however, unlikely that someone as thoroughly indoctrinated as Obama was can change his outlook. The narrative he grew up in covers every detail of life and provides a facile explanation for everything. Our arugula shopper knows nothing of the average person’s life and, let’s face it, is unlikely to ever figure it out.

He’s been brought into the present after a fashion, the ’30s DNA spliced into the DNA of a Clinton Democrat, so that he’ll make half-hearted gestures, like proclaiming — in contradiction to his earlier pronouncements — that he’s following in the path of Ronald Reagan; or talking about being a centrist; or disguising tax increases as cuts in spending.

But the end result always breeds true to his dinosaurian world view: He’ll favor unions because somehow, over the years, they’ve become associated with the 1930s (even though FDR did not approve of civil service unions); he’ll sell out allies for a SALT treaty, because it was very important in the 70s; he’ll try to expand train service because he has the odd idea public transport fosters the type of close knit communities we had in the 1930s; he’ll obsess over green energy, because Carter did; he’ll do his best to bring back make-work paid for by the government because he imagines that’s what we want.

In fact, throughout all of it, he thinks he’s doing what everyone — not just the people who brought him up — longs for.

And throughout his flailing around in a world in which he doesn’t fit, examples of this displacement emerge in his speech: Sputnik, Cleveland, cars which use up eight miles a gallon.

If, like the restored velociraptor, he weren’t such a danger to the modern world, one would be tempted to feel sorry for our Jurassic President, wandering around in a landscape he can neither perceive nor understand because all his senses and training show him a world that no longer exists — and perhaps never did.

Sarah Hoyt lives in Colorado with her husband, two sons and too many cats. She has published Darkship Thieves and 16 other novels, and over 100 short stories. Writing non-fiction is a new, daunting endeavor. For more on Sarah and samples of her writing, look around at Sarah A. Hoyt.com or check out her writing and life blog at According to Hoyt.com.
Read more by Sarah Hoyt
SHOW COMMENTS