The Fatiha (Opening) is the first sura (chapter) of the Qur’an, and most common prayer of Islam. If you’re a pious Muslim who prays the five requisite daily prayers of Islam, you will recite the Fatiha seventeen times in the course of those prayers.

According to an Islamic tradition, the Muslim prophet Muhammad said that the Fatiha surpassed anything revealed by Allah (“the God” in Arabic, and the word for God used by Arabic-speaking Christians and Jews, as well as Muslims) in the Torah, the Gospel, or the rest of the Qur’an. And indeed, it efficiently and eloquently encapsulates many of the principal themes of the Qur’an and Islam in general: Allah as the “Lord of the worlds,” who alone is to be worshiped and asked for help, the merciful judge of every soul on the Last Day.

In Islamic theology, Allah is the speaker of every word of the Qur’an. Some have found it strange that Allah would say something like “Praise is to Allah, Lord of the worlds,” but Islamic tradition holds that Allah revealed this prayer to Muhammad early in his career as a prophet (which began in the year 610 AD, when he received his first revelation from Allah through the angel Gabriel — a revelation that is now contained in the Qur’an’s 96th chapter), so that the Muslims would know how to pray. 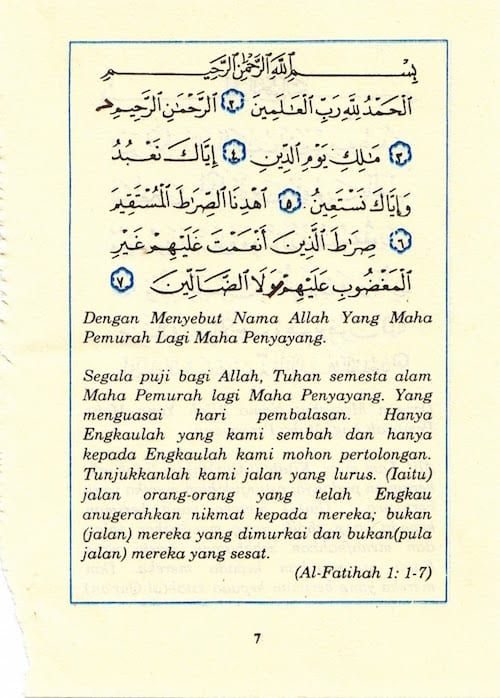 It is for its last two verses that the Fatiha is of most concern to non-Muslims.

A Shi’ite imam, Husham Al-Husainy, ignited controversy back in 2007 by paraphrasing this passage during a prayer at a Democratic National Committee winter meeting, giving the impression that he was praying that the assembled pols convert to Islam. Then Imam Yusuf Kavakci of the Dallas Central Mosque prayed the Fatiha at the Texas State Senate, giving rise to the same concerns.

The final two verses of the Fatiha ask Allah:

Guide us to the straight path, the path of those upon whom You have bestowed favor, not of those who have evoked [Your] anger or of those who are astray.

The traditional Islamic understanding of this is that the “straight path” is Islam — cf. Islamic apologist John Esposito’s book Islam: The Straight Path — while the path “of those who have evoked Allah’s anger” are the Jews, and those who have gone “astray” are the Christians.

The classic Qur’anic commentator Ibn Kathir explains that “the two paths He described here are both misguided,” and that those “two paths are the paths of the Christians and Jews, a fact that the believer should beware of so that he avoids them. The path of the believers is knowledge of the truth and abiding by it. In comparison, the Jews abandoned practicing the religion, while the Christians lost the true knowledge. This is why ‘anger’ descended upon the Jews, while being described as ‘led astray’ is more appropriate of the Christians.”

This is the view of Tabari, Zamakhshari, the Tafsir al-Jalalayn, the Tanwir al-Miqbas min Tafsir Ibn Abbas, and Ibn Arabi, as well as Ibn Kathir. One contrasting, but not majority view, is that of Nisaburi, who says that “those who have incurred Allah’s wrath are the people of negligence, and those who have gone astray are the people of immoderation.”

Wahhabis drew criticism a few years back for adding “such as the Jews” and “such as the Christians” into parenthetical glosses on this passage in Qur’ans printed in Saudi Arabia.

Some Western commentators imagined that the Saudis originated this interpretation, and indeed the whole idea of Qur’anic hostility toward Jews and Christians. They found it inconceivable that Muslims all over the world would learn as a matter of course that the central prayer of their faith anathematizes Jews and Christians.

But unfortunately, this interpretation is venerable and mainstream in Islamic theology. The printing of the interpretation in parenthetical glosses into a translation would be unlikely to affect Muslim attitudes, since the Arabic text is always and everywhere normative in any case, and since so many mainstream commentaries contain the idea that the Jews and Christians are being criticized here.

Seventeen times a day, by the pious.

Please note that I am not saying that the anti-Jewish and anti-Christian interpretation of the Fatiha is the “correct” one. While I don’t believe that religious texts are infinitely malleable and can be made to mean whatever the reader wants them to mean, as some apparently do, in this case Nisaburi’s reading has as much to commend it as the other: there is nothing in the text itself that absolutely compels one to believe that it is talking about Jews and Christians. And it is noteworthy that in his massive and evocatively named 30-volume commentary on the Qur’an, Fi Zilal al-Qur’an (In the Shade of the Qur’an), the twentieth-century jihad theorist Sayyid Qutb doesn’t mention Jews or Christians in connection with this passage.

At the same time, however, the idea in Islam that Jews have earned Allah’s anger and Christians have gone astray doesn’t depend on this passage alone. The Jews have earned Allah’s “wrath upon wrath” by rejecting Muhammad (2:87-90), and the Christians have gone astray by holding to the divinity of Christ: “They have certainly disbelieved who say, ‘Allah is the Messiah, the son of Mary'”(5:72).

The Hadith, the traditions of the words and deeds of Muhammad and the early Muslims, also contains material linking Jews to Allah’s anger and Christians to his curse, which resulting from their straying from the true path. (The Jews are accursed also, according to Qur’an 2:89, and both are accursed according to 9:30). One hadith recounts that an early Muslim, Zaid bin ‘Amr bin Nufail, in his travels met with Jewish and Christian scholars. The Jewish scholar told him, “You will not embrace our religion unless you receive your share of Allah’s Anger,” and the Christian said, “You will not embrace our religion unless you get a share of Allah’s Curse.” Zaid, needless to say, became a Muslim.

In light of these and similar passages it shouldn’t be surprising that many Muslim commentators have understood the Fatiha to be referring to Jews and Christians.