The election has been marred with ugly undertones of anti-Semitism: one candidate accuses the other of being more loyal to Israel than to his own land, and anchors his candidacy in ethnic and religious identity politics. Observers fear that by making his anti-Israel stance the lynchpin of his campaign, the candidate is setting a precedent that could have severe negative consequences in the near future.

All this sounds as if it could be taking place in Egypt, where Muslim Brotherhood candidate Mohammed Morsi has signaled that he wants to review, if not discard outright, that nation’s peace treaty with Israel, and has taken such a hardline anti-Israel stance that his secular opponent, Ahmed Shafiq, has accused the Brotherhood of acting as if “Palestine is the capital of Egypt.” But this election is not taking place in Egypt, or anywhere that Islamic anti-Semitism might be expected to resonate with the electorate. This anti-Semitic mudslinging is going on in a congressional race in New Jersey.

Steve Rothman is a Democrat who was first elected to Congress from New Jersey’s Ninth District in 1996. He is also Jewish. He currently faces a tough reelection challenge from Bill Pascrell, a Roman Catholic who entered Congress at the same time as Rothman and now, because of redistricting, finds himself in Rothman’s district. In the district also is a sizeable contingent of Arabs and Muslims, who have injected an unprecedented level of Jew-baiting into the campaign. Said Ben Chouake, president of NORPAC, a pro-Israel political action committee: “One side says, ‘We want this Jew out of office’ and, frankly, it’s pretty unsettling. They emphasized,” he noted, that Rothman is “a Jewish congressman.” 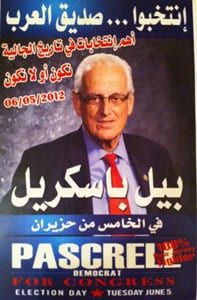 The Washington Free Beacon published an image of an Arabic-language poster (reproduced at left) claiming that the Rothman/Pascrell race was “the most important election in the history of the [Arab] community” and exhorting the “Arab diaspora community” to vote for Pascrell as “the friend of the Arabs.” In February, Aref Assaf, the president of the American Arab Forum, wrote an op-ed in the New Jersey Star-Ledger titled “Rothman is Israel’s man in District 9.” Assaf asserted that “as total and blind support for Israel becomes the only reason for choosing Rothman, voters who do not view the elections in this prism will need to take notice. Loyalty to a foreign flag is not loyalty to America’s.”

Assaf hoped that Muslim voters in New Jersey’s Ninth District would defeat Rothman: “We will soon find out if Muslim religious leaders will reach out to their respective congregations.” He titled another column last week “Congressman Pascrell is best for New Jersey,” but he sounded as if it were more important to him, and to the district’s Arab and Muslim voters, that Rothman has been identified as a “pro-Israel stalwart.” Assaf even asserted that “various media outlets have framed the race as a litmus test for the survival of Israel,” and observed happily that “Arab and Muslim grassroots meetings are forming all over District 9, strategizing for a massive voter turnout, with voter registration drives outside mosques and along Main Street, fundraising, and a targeted mobilization of volunteers. … The candidates’ position on Palestine appears paramount, and for many, it has already informed their expected vote.”

One key reason why Assaf is so happy with Pascrell is his support for a local imam, Mohammed Qatanani, who is fighting a legal battle to become a permanent resident of the U.S. Yet investigative journalist Daniel Greenfield reports, in connection with earlier attempts to deport the imam, that “despite the fact that Mohammed Qatanani was a member of the Muslim Brotherhood, the organization that is behind both al-Qaeda and Hamas, despite his own guilty plea to being a member of Hamas, and despite the fact that even in the United States, he had defended a charity that provided funds to children of suicide bombers (this is done as an incentive to reassure terrorists that if they die their families will be taken care of), Qatanani was not deported.”

Assaf’s support for the Hamas- and Muslim Brotherhood-linked Qatanani makes it clear that behind much of the Arab and Muslim opposition to Rothman is the same Islamic anti-Semitism that motivates Hamas and Hizballah and makes any peace settlement between the Israelis and the Palestinian Arabs impossible to sustain: the jihad against Israel will ultimately be satisfied with nothing less than the destruction of the Jewish State, as is enunciated in the Hamas Charter via a quotation from Muslim Brotherhood founder Hasan al-Banna: “Israel will exist and will continue to exist until Islam will obliterate it, just as it obliterated others before it.”

The foes of Israel know the stakes are high. Assaf noted that the American Arab Institute’s James Zogby recently raised $50,000 for Pascrell, and that Muslim Brotherhood-linked Muslim Congressman Keith Ellison (D-MN) recently appeared at a local mosque to stump for Pascrell. And in yet another op-ed last week, Assaf emphasized the necessity to develop the power of the Muslim voting bloc: “Candidates and political parties will use this information in the 2012 elections to determine which groups of voters are important and which groups are not. The more we vote this year, the more important our community will be in future elections. In New Jersey’s Ninth District race between Pascrell and Rothman, our vote will be of pivotal significance to the outcome.”

It may well be. And it has already introduced an unwelcome new feature into American politics: Islamic anti-Semitism. One may hope that Representative Pascrell will decide to act the statesman and repudiate his unsavory and hateful supporters; but statesmanlike conduct is in unfortunately short supply in American politics these days.