Anti-Israel Protests in America Cross the Line of Decency

Like every other sovereign nation, Israel has the right and obligation to defend its citizens from attack. Article 51 of the United Nations Charter reserves to every nation the right to engage in self-defense against armed attacks. Israel has been left with no other alternative but to take stronger measures to protect its citizens against Palestinian terrorist attacks. Israel’s actions have specifically targeted Hamas command centers, rocket-launching sites, security installations, weapons stockpiles, and weapons smuggling tunnels. Moreover, Israel is taking painstaking steps to limit civilian casualties, a difficult endeavor when one considers Palestinian use of civilians as human shields. Those who have been killed since Israel’s military operation “Cast Lead” began in Gaza have overwhelmingly been Hamas terrorists.

Regardless of the Palestinian violence, Israel continues to facilitate humanitarian assistance to Gaza. In the past few days, while Hamas has continued to fire rockets into Israel more than 60 truckloads of humanitarian supplies and 105,000 gallons of fuel were transferred to Gaza.

During the past six months, Israel facilitated the transfer into Gaza of more than 14,000 trucks, 185,000 tons of food and medicinal supplies, more than 7,000 tons of heating gas, and more than 10 million gallons of fuel. More than 4,000 people needing medical treatment were permitted to cross into Israel to seek treatment or travel to other nations for health care. Israel also provides 70 percent of Gaza’s electricity.

While it is clear that the Palestinians broke any semblance of a ceasefire through blatant incitement and attacks upon Israeli residents in southern Israel, thousands of Muslim youth and their supporters have taken to the streets over the past few days in condemnation of Israel.

In Iran, volunteer suicide bombers seek government approval to attack Israel. Hard-line Iranian student groups drafted an open letter to Ahmadinejad. The students write: “Volunteer student suicide groups … are determined to go to Gaza. You are expected to issue orders to the relevant authorities to pave the way for such action.”

The depravity of such a statement may seem far-fetched and shocking to those who reside in western nations. Yet sentiments such as these are not restricted to Islamic countries. The American mainstream media chooses to present the protests as “Gaza Peace” events or rallies, when in reality the attendants of such rallies are pro-Hamas, anti-Semitic mobs who have shouted obscenities that would have made the Nazis proud.

In Florida, approximately 200 to 300 Muslim youth and community members organized a protest outside a Fort Lauderdale courthouse on December 30, 2008. The protest was organized by A.N.S.W.E.R. Coalition, Act Now to Stop War and Racism, and the Muslim American Society.

Placards and messages depicted by the protesters said things such as “Nuke Israel,” a sentiment also expressed vocally by a protester at one point. Another protester shouted to the Jewish and pro-Israel supporters, “You need ovens, that’s what you need!” The person appeared perfectly comfortable with voicing this opinion more than once.

Video from the protest is available here.

In Dallas, the chapter of CAIR gathered hundreds of individuals and hosted a public exhibition at the assassination site of the late President Kennedy. CAIR is still listed as an unindicted co-conspirator in the recent case which found that members of a pro-Palestinian group had illegally funneled more than 12 million dollars to Hamas. CAIR has unsuccessfully attempted to get the name of their organization removed from the list.

At around 4:05 of this video the Muslim crowds begin chanting “Khaiber, khaiber al Yahud.” The Arabic chanting is almost genocidal. The protesters mention Muhammad and suggest that he is coming to the border to wage a war. “Khaiber” may allude to the Battle of Khaiber, in which the prophet of Islam massacred the Jews of Khaiber for failing to submit to Islam. Protesters seem to depict their desire for the annihilation of Jews, shouting genocidal statements in Arabic.

The scene in Chicago was exceptionally ugly. Police estimated that nearly 3,000 Palestinian supporters gathered at the Chicago Tribune Plaza in front of the Israeli Consulate. The protesters had megaphones and large speakers, making certain that their angry ranting and raging in both Arabic and English was heard.

One of the Palestinian supporters crossed the barriers and physically assaulted a civilian who came out in support of Israel. Pro-Israel supporters had stones and coins thrown at them as they stood in silence watching this angry mob.

One of the members of the protest group took an “Israeli” flag from one of the Israel supporters, placed it on the ground, and spat upon it. The protester later took the flag and lit it on fire. It was clear that the Chicago Police Department had no idea of what they were getting into. The police had to provide an armed escort for the Jews and pro-Israel supporters in the area.

The protests in San Francisco, Los Angeles, Washington D.C., Boston, and other cities have been quite similar. Protesters have openly carried large signs juxtaposing the Israeli flag with Nazi symbols. 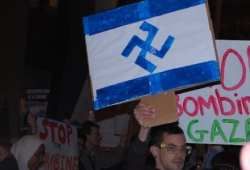 Other placards protesters carried have said things such as “Down With Zionism.” By definition, “Zionism” is a term coined in 1896 to describe an international philosophy maintaining that Jews should have a single national homeland in the Middle East where they would not have to worry about discrimination, pogroms, or other persecutions, but be able to live peacefully.

Today, 15 countries are officially Muslim and 48 countries maintain Muslim majority populations. It is detestable for someone who is from one of these countries to call for the annihilation of the single Jewish state which is the size of New Jersey. This unreasonable condemnation of Zionism is even more ridiculous when one considers that Zionism allowed for the creation of a country which is tolerant of all individuals and minorities, including Muslims. While Muslims today serve within the Israeli government and enjoy a higher standard of living than any other country in the Middle East, the remaining Jews in Islamic countries live in fear of persecution.

Of course, the consensus among radical Muslims present at these rallies is that Jews should all go back to Poland or Russia. Yet more than half of Israelis are Middle EasternIn 1945 there were up to one million Jews living in the Middle East and North Africa — many living in communities dating back more than three millennia. Today, there are only a few thousand remaining as Jews became unwelcome in their own countries. Jews experienced vicious pogroms at the hands of Arab governments, sparking a mass exodus of Mizrahi Jews to modern-day Israel.

Jewish organizations and concerned citizens must effectively demonstrate and rally together for Israel against unwarranted hatred and lies.