On Wednesday night, former president Bill Clinton gave a long-winded address (as is his wont — few like the sound of their own voice more than him, with the possible exception of Fidel Castro) in an attempt to make an excuse for the current president’s pathetic job performance on the economy. Here is the essence of his argument:

President Obama started with a much weaker economy than I did. No president — not me, not any of my predecessors — could have repaired all the damage in just four years.

So is it true?

Well, first of all, the statement is misleading, in that it implies that Clinton started with a weak economy at all. Despite all the nonsense by James Carville and others during the campaign in 1992 about George Herbert Walker Bush creating “the worst economy in fifty years,” Clinton actually inherited a robust economic recovery, and, as shown in the graph below, GDP had been growing at a four percent clip all through the election year (recall that Clinton won with only 43% of the popular vote because Ross Perot took so many votes from Bush).

Of course, there is also an implication that Bill Clinton is responsible for the economic boom that he inherited, and that no president could have done a better job than he did. But in fact, much of the boom was due to a) the end of the Cold War, with its so-called “peace dividend,” b) the explosive growth of the Internet and the associated tech bubble (which popped in 2000, just in time to hand George W. Bush a recession as he came into office), and c) a Republican Congress in 1994, the first in four decades, forcing a reform of welfare and getting the deficit under control, something for which Bill Clinton had no plans to do at all when he came into office. Clinton cannot take credit for any of these things, other than handing Congress over to the other party as a result of his health-care and gun-control overreach in the beginning of his term.

Now, let’s look at the current situation. Here’s a graph from about a year ago showing how little we have bounced back in terms of job growth relative to past recessions. 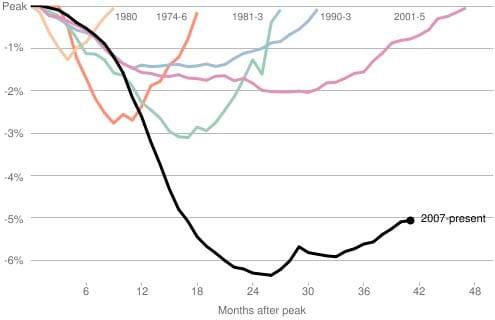 Considering that we’ve been stuck at above 8% unemployment for the past year as well (including last week’s jobs report), just continue the graph for the current economy with the same slight upward slope to the right.

While this particular graph only goes back a few decades, the current “recovery” is actually the worst since the end of World War II. In almost every other recovery for the past several decades, employment returned to pre-recession levels within three years (the most recent one during Bush’s first term took almost four). In this recovery, if we extrapolate the current trend, it’s still several years away. Note also that in each case, the curves are symmetric, that is, the slope of the recovery was about the same steepness as the decline, except for the present one, in which we had a sharp and deep job loss, and a very shallow recovery. And if we were to consider the real unemployment number, taking into account those who are underemployed and those who have given up, it’s probably closer to twenty percent, not eight. In other words, Great Depression levels.

This shouldn’t be surprising, actually. In his acceptance speech at the DNC last week, in an attempt to describe how he would fix the situation, Barack Obama said this: “It will require common effort, shared responsibility, and the kind of bold, persistent experimentation that Franklin Roosevelt pursued during the only crisis worse than this one.”

That’s right. The kind of “bold, persistent experimentation” that kept the economy sick for almost a decade after Roosevelt took office, and ended only when World War II intervened. Such “experiments” included jailing a tailor for charging too low a price to press a shirt, and arbitrarily raising the price of gold by twenty-one cents because “three times seven is a lucky number.”

It is now commonly accepted among economic historians that it was the war that ended the Depression, not Roosevelt’s policies per se, but the reason often given remains a misinterpretation of the cause. The Depression didn’t end because of the massive increase in government spending on the war, as the Keynesians would have it, but rather because a) the unemployed men were taken off the streets and shipped overseas and b) Roosevelt ended his toxic tinkering with his economic toy because he was too distracted by the war. When he died in April of 1945, his own “bold, persistent experimentation” came to a definite end, and though Harry Truman wanted to continue it, the new Republican Congress put a final end to it (sound familiar?) and the economy finally fully recovered in the late forties after fifteen years of deprivation and the prevention of wealth creation.

So given that history and the president’s own history of throwing wrenches in the works of real job and wealth creation with his general war on business, his arbitrary shutdown of Gulf oil exploration, his refusal to allow the pipeline to be built, etc., let’s apply Occam’s Razor. Which is more likely: that there is something fundamentally different about this particular recession that created the asymmetry between the loss and recovery, and would prevent “any president” from fixing it, or that (like Franklin Roosevelt) this president simply doesn’t know what he’s doing? “Experimentation,” after all, is something one does when trying to figure out how things work, not what one does when trying to fix things that one already knows how they work. A plan to do “experimentation” is in fact an admission of ignorance about the process being experimented upon.

Almost four years ago, we elected a man to fix this economy, despite his complete lack of experience or credentials for doing such a thing, and abundant evidence even at the time that wealth redistribution was a much higher concern for him than wealth creation. He’s had over three and a half years of on-the-job training, and based on his speech last night, which was a montage of dozens of other speeches over the past forty months, he has learned nothing at all. As Clint said last week, time to let him go.