If Obama Is the 'First Jewish President,' I Am the Last Barbie Doll

I have been writing about 21st century anti-Semitism since the turn of the century.

Words don’t fail me, nor has my spirit grown dim. But what is now going on is so ghastly, so omnipresent, so “over the top,” that even a careful wordsmith is hard-pressed to describe it accurately without sounding (and being accused of sounding) “paranoid,” “hysterical,” “strident,” and, yes, “utterly without a sense of humor.”

I am finding it hard to laugh about John Heilemann’s cover story in New York magazine. Heilemann is a regular contributor to New York’s pages and has also penned a book about Barack Obama’s “hope” campaign on which he worked.

In a scandalous town and in a scandalous time, the cover of the 9/26 issue of New York magazine may be in a class all its own. It depicts President Obama, seen from behind, wearing a kippah. The title: “The First Jewish President.” The truth?

Barack Obama is the best friend Israel has right now. 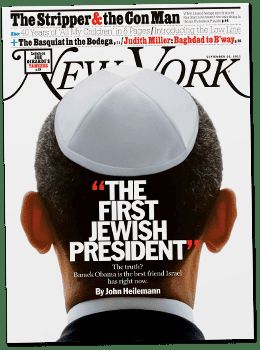 Would anyone dare to present Obama wearing a keffiyeh as America’s “first Muslim president”? Indeed, this case could far more easily be made, but the accusations of “Islamophobia” and right-wing conservative “neo-fascists” (Heilemann’s own words) would roil the media waters for weeks. Heilemann quotes one of Obama’s “most prolific fundraisers” as complaining: “We have a big-time Jewish problem.” I wonder why Obama’s fundraisers (and the media) do not talk about the really “big-time” Arab lobby? Does Obama’s team have no problem raising funds from wealthy, oil-rich Arab states and their proxies: Saudi Arabia Kuwait, Bahrain, Quatar, Oman, Abu Dhabi, etc.…?

We know that Obama’s appeasement and flowery, flattering dhimmi-like rhetoric has not made the Arabs love, like, or respect America at all and that on Obama’s watch, Islamists and terrorists have spewed vicious anti-American and anti-Israel hate speech, and have continued and escalated their attacks on American diplomats and embassies in Afghanistan (2011), Libya (2010-2011), Yemen (2008), Syria (2011), and Turkey (2008).

I know, I know: Heilemann and Bill Keller at the New York Times will explain this away by blaming President Bush and the Republicans.

Despite Heilemann’s view of Jews as rich and loud (Jews wield an “earsplitting volume of the collective megaphone”), he does not believe that Jews really count (Jews “are only 2% of the national electorate, too small a proportion to matter much”). Heilemann seems to believe that bogeyman Jews are not to be feared: They do not kidnap or behead people, nor do they blow up civilians or fly planes into Wall Street and Pentagon buildings.

Heilemann knows whom to fear and whom to appease….the other brand. And Heilemann’s, perhaps Obama’s, concern about their “big-time Jewish problem” merely concerns his access to Jewish money for his campaign. Heilemann (and Obama) are cold — very cold — where Israel is concerned.

The piece is far worse than the cover. It should be “fisked” line by line — and probably will be by those who do these things rather well. Suffice to say: Heilemann’s piece has no context and is rife with factual errors. But my concern is the callousness of his overall tone. For example, Heilemann writes:

In attempting to apply tough love to Israel, Obama is trying to make a stalwart ally see that undertaking the painful and risky compromises necessary for peace with the Palestinians is the only way to preserve the Zionist dream — which is to say a future as a state both Jewish and democratic. His role here is not that of the callous assailant but of the caring and sober brother slapping his drunken sibling: The point is not to hurt the guy but to get him to sober up.

Whoa! Is Heilemann perhaps thinking of Obama’s Kenyan half-uncle, who was recently arrested for drunken driving in Massachusetts and who faced deportation for this? Or is he thinking of Obama’s own Kenyan father, who was known as a polygamist, wife-batterer, and alcoholic?

No, I don’t think we should blame the son for the sins of the father and Obama is admirably a family man. My point: Just as Heilemann and New York magazine would never pose Obama in a keffiyeh, they obviously would, and just have, presented a sober, hard-working, Israeli prime minister as Obama’s “drunken sibling” in a way they would never present Obama’s own relatives. Nor would they present the barbarian tyrants as the dangerous and hypocritical liars they really are. 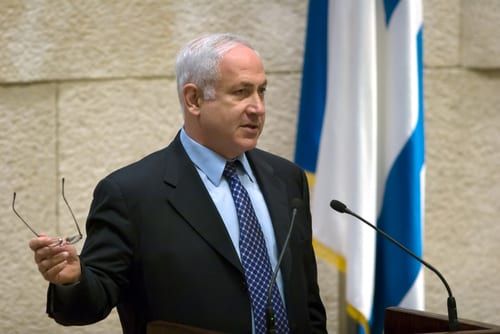 What is going on? Obama’s people have begun to blame the Jews for all his problems, but especially for his failed “popularity” among the voters.

The New York Times has also been defending the president full-time, every day. Yesterday, Bill Keller, the former executive editor, inaugurated his weekly column with an article which blamed Obama’s problems on

the intractable legacy bequeathed by George W. Bush; Republican resistance amounting to sabotage; the unrealistic expectations and inevitable disenchantment of some of the president’s supporters; and, to be sure, the man himself.

Thus, Keller attributes only 25% of Obama’s problems to Obama, “the man himself.”

Despite all the liberal and, often Jewish, media coverage Obama gets — it may not be enough to save his presidency or to get him re-elected. Obama’s people are scapegoating the Jews.

In the wake of the Democratic Party’s loss of a seat in the ninth congressional district in New York, the Obama White House is now trying to shame and bully Jewish voters and Jewish funders just as they have shamed and bullied the leaders of the Jewish state. Oddly, in both cases, the Democrats, including Jewish Democrats, may actually want to succeed — but they are so ambivalent, angry, and misguided about Middle East politics and about Jews that they just can’t seem to get out of their own agonizingly anti-Semitic way.

What was the preferred insult Egyptian protesters hurled at Hosni Mubarak?

Is it entirely a coincidence that Columbia students may be privately dining with Ahmadinejad this week as well and, in diabolically Orwellian style, that New York magazine dare present Obama as a Jew? Or is this merely part of the escalating, unconscious, and usually hotly denied anti-Semitism that exists on American campuses and in the American media?

My conclusion: the Islamic world’s over-the-top anti-Semitism has come to New York. It’s here. It’s ugly. And, it’s on the cover of New York magazine.