Will We See a Florida Recount Rematch in Ohio?

Could we see a repeat of the 2000 Florida recount mayhem in Ohio this year? Unfortunately, the stage is being set in such a way that a close election could be settled by lawyers and judges. Despite the efforts of Republicans to standardize the elections process, several issues remain unresolved, which could cause serious problems on Election Day and in the aftermath if the election is close enough for a recount.

One major pending issue is that the question of weekend voting for both military and non-military voters remains unresolved less than a month before Election Day. Last week, the U.S. Sixth Circuit Court of Appeals overruled the Ohio legislature in Obama for America v. Husted and ordered county boards of elections (BOE) to set their own dates and times for early absentee voting. The legislature had passed a series of laws (through a rather tangled process) that ended early voting at 6 p.m. the Friday before Election Day, creating uniform voting hours throughout the state.

The new Ohio law also gave members of the military extra time to vote due to the Uniformed and Overseas Citizens Absentee Voting Act (UOCAVA). Although the final bill in the saga was signed into law in May, the Obama campaign waited until mid-July to file their lawsuit, setting the stage for this month’s eleventh-hour showdown. On Tuesday, Attorney General Mike DeWine appealed the decision to the U.S. Supreme Court.

There are several important issues being litigated in this case, which Ohio Sec. of State Jon Husted summarized in an advisory last week :

At stake is more than simply the days and hours for in-person absentee voting for this year’s general election: whether there is a fundamental right to vote by in-person absentee ballot, whether a State’s legislature can change its methods of elections administration once a particular method has been used at even one election, whether military voters can be given additional opportunities to vote under the law, and most strikingly, whether the administration of elections is primarily a task for states or federal judges. For these reasons, my office is appealing the matter to the U.S. Supreme Court.

On all four of these issues, the appeals court ruled in favor of the Obama campaign and against the Ohio legislature, the military, and the Ohio secretary of state.

The most fundamental issue is whether the state legislature can enact and enforce its own election laws. Judge Helene White, a Democrat who was originally nominated by President Clinton and then President Bush as part of a bipartisan compromise, dissented in part but then ran through a logical obstacle course to end up voting with the majority. She acknowledged that the new end date for early voting was the intent of the majority of the legislature and that “states are permitted broad discretion in devising the election scheme that fits best with the perceived needs of the state.” She acknowledged that the Supreme Court has ruled that “there is no abstract constitutional right to vote by absentee ballot.” She admitted that “it cannot be fairly said that there was evidence that a significant number of Ohio voters will be precluded from voting unless weekend and after-hours voting is restored.” She even confessed that “no case has held that voting has to be convenient.”

But why should any of those facts hinder a judge’s ability to legislate from the bench? White agreed with her fellow judges that the possibility of long lines on Election Day outweighed the will of the legislature:

Given the studies presented regarding the heavy use of in-person after-hours and weekend voting, and the legitimate concerns of Ohio’s largest counties and their voters regarding the smooth and efficient running of the 2012 presidential election, I conclude that defendants’ legitimate regulatory interests do not outweigh the burden on voters whose right to vote in the upcoming election would be burdened by the joint effect of the statute and the directive.

Another important issue is whether military voters may be afforded special voting privileges. The court sided with the Obama campaign, saying that there is really no difference between (non-deployed) military voters and the general public:

There is no reason to provide these [non-UOCAVA] voters with fewer opportunities to vote than military voters, particularly when there is no evidence that local boards of elections will be unable to cope with more early voters.

In a drive-by swipe at the military, the court reduced the special privileges afforded by the UOCAVA to partisan ballot-box stuffing, using a slippery slope argument and saying that if they allowed special voting rights for non-deployed members of the military,

Partisan state legislatures could give extra early voting time to groups that traditionally support the party in power and impose corresponding burdens on the other party’s core constituents. 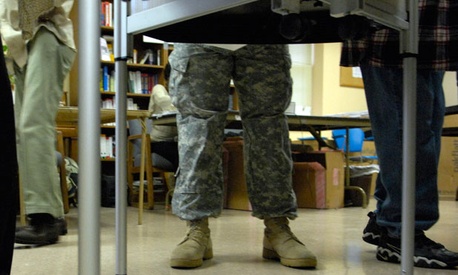 While we wait to see if the Supreme Court will intervene, SOS Husted is marching on with his quest for uniform voting hours. He sent an advisory to all county boards of elections in the state last week, asking for their recommendations on how to set uniform voting hours throughout the state for the three days before the election. It is unclear whether mandatory uniform hours for the weekend before the election would satisfy the court’s order to allow the county boards to decide, but it’s a rather canny strategic move on Husted’s part.

If Husted’s uniform hours scheme doesn’t work, expect Electionmageddon. If the boards are ordered to set their own hours, two Democrat and two Republican election officials in each county will make the decision. This was a mostly non-controversial issue in past elections, but in the wake of the court case, it will likely be very contentious. In the event of a deadlocked board, Husted is the tiebreaker. Bring on the legal teams, the paid union protesters, and the disenfranchisement police.

The marauding Democratic legal team received an assist on Thursday when SEIU v. Husted was resolved (for now). The SEIU had argued that voters who cast their ballots in the wrong precinct (but in the right location in a multi-precinct site) should have their votes counted unless election officials could prove that they instructed the voter to go to the correct polling location and the voter refused and demanded a provisional ballot. The 6th Circuit Court of Appeals ruled in favor of the SEIU, saying those votes must be counted. BOE officials will be required to “modify” the ballots after the fact if the voters cast ballots for down-ticket races for which they were not entitled to vote. The other part of the lawsuit said that the state erred in not counting provisional ballots that contained incomplete identifier information, namely, the voter’s signature. The court sided with the state, finding that provisional ballots must at least have signatures (even if they are not required to be cast in the proper precinct).

Husted’s press release applauded the signature requirement but made no mention of the wrong precinct issue, indicating that he will not (immediately) pursue the case and will leave the 14,000 votes (the number thrown out in the last election) on the table. However, if the election were to come down to 14,000 votes, it’s reasonable to assume those votes would be contested.

In addition to the numerous challenges by the Democratic legal eagles, last Wednesday, Cleveland’s Channel 5 News reported that 45,000 absentee ballots were improperly printed and mailed to voters in Cuyahoga County. The boxes that require the name, address, and signature have text printed in a dark font, requiring voters to write on top of the printed text in order to fill out the ballot. Not only is this causing confusion for voters, it raises the possibility of error at the BOE and increases the chance that voter fraud will go undetected.

Provisional ballots already present an added degree of difficulty for election officials. They are all hand-processed and officials must verify signatures and cross-check addresses to determine if the voters are eligible to vote and therefore decide if the vote should be counted. Although the Cuyahoga County BOE is making assurances that they will not have a problem reading the identifying information and signatures, once again, in a close election, those ballots will almost certainly be heavily scrutinized for irregularities. The Florida hanging chad inspector will likely be deployed to Ohio to peer at thousands of illegible provisional ballots.

We can be certain of one thing: if the election is close, the real winners will be the lawyers. There are several potential avenues for legal challenges based on contested ballots, in addition to the usual Democratic claims of disenfranchisement.  Although the threshold is high for the automatic recount trigger, any individual candidate may request a recount. And so, even as you read this, the state is lawyering up and attorneys are booking their flights to Ohio and reserving rooms for the month of November.  Don’t forget your snow boots and parkas. November isn’t our best month.

UPDATE Tuesday, October 16, 1:00 pm EST: The U.S. Supreme Court sided with the Obama campaign on Tuesday, turning down Ohio’s petition in Obama for America v. Husted and clearing the way for county boards of elections to set their own hours for early voting. Without comment or dissent, the court refused to stay the lower court’s ruling. In essence, the decision affirmed that courts can overrule state election laws for the sake of voter convenience. The decision also agreed that non-deployed members of the military should not be treated with special consideration under UOCAVA. The Obama campaign had argued that their circumstances are not more difficult than a firefighter or a civilian citizen who may have an unexpected illness on election day. The U.S. Supreme Court agreed, which will likely open the door to other attacks on voting rights for members of the military.

UPDATE Wednesday: In response to the decision, Secretary of State Jon Husted ordered all county boards of elections to open for early voting the Saturday, Sunday, and Monday before Election Day. For most Ohio counties, this will be the first time they have offered extended weekend voting hours prior to Election Day. In a press release, Husted said, “Despite the Court’s decision today to deny our request for a stay, I firmly believe Ohio and its elected legislature should set the rules with respect to elections in Ohio, and not the federal court system.”