In a last-ditch effort to find a moral justification for a war that his radical leftist base could accept, President Barack Obama attributed recent bombings in Africa to al-Qaeda’s bigotry, describing the terrorist masterminds as racist radicals. Accompanied by a somber Rev. Al Sharpton, Jesse Jackson, and NAACP President Ben Jealous, President Obama read a joint declaration denouncing al-Qaeda’s bigoted practice of “sacrificing innocent African life” as a means to hit a legitimate Western target. To cover all possible bases, the declaration included a list of other random offenses, such as: the terrorist group’s failure to embrace the local LGBT community, their complete lack of interest in environmental activism and in raising awareness about climate change, turning a blind eye to the existence of a “glass ceiling” for female suicide bombers, and a few documented instances of not separating paper from plastic. 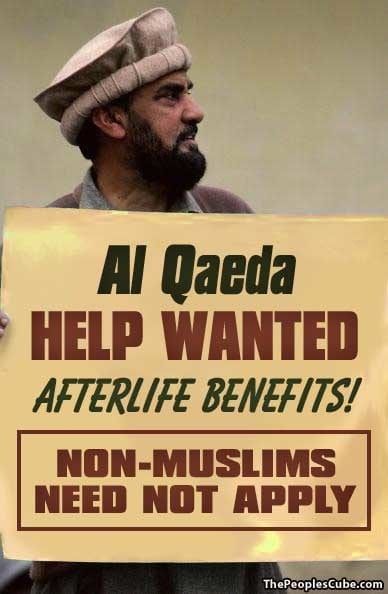 This is not behavior most self-respecting radicals would condone, nor expect from fellow radicals. From now on, our number one priority in Afghanistan and elsewhere is to impose strict Rules for Radicals on local extremists. If they want to continue to enjoy moral support while fighting U.S. imperialism, they’ll have to play by the book and conform to accepted standards. They’re going to have to learn the meaning of diversity quotas and sensitivity training. They’re going to have to provide proof of employment of a proportional number of atheists, Jews, Buddhists, Hindus, Animists, and followers of The Ancient Science of Soul Travel, in order to lift the undeserved stigma of violence and extremism from the Muslim faith.

Obama’s change of priorities brought a welcome relief to U.S. field commanders, who were all too happy to force the enemy units to comply with the same government-imposed rules and restrictions that the U.S. Army is facing on a daily basis. As a result, a number of radical groups in Iraq and Afghanistan have already switched sides after only a few days of living under U.S.-mandated Rules for Radicals.

One man, identified only as a “Soldier for Allah,” explained:

We were led into a classroom and had to sit in circles for what they called “Collective Self-Attaining Support Sessions” where they lectured us on matters such as “Gender Awareness,” “Multicultural Identity,” and “Environmental Racism.” For the love of Allah (peace be upon him and his messenger, the Prophet Muhammad), even in Saddam’s prisons, I was never accused so often of being guilty!

At this point, he broke down and cried:

You win, America! I had to write a 17-page memo explaining why my unit did not have a Hispanic presence! Please, you win!

Diversity requirements are among the most effective weapons wielded by the Americans. A White House aide pointed out:

Islamic radicals need to understand that they must meet our goals and timetables. That is, if you’re a terrorist and you shoot at us, we’re gonna speak with you. And if your terrorist group doesn’t meet our minority-and-women representation requirements, you’re gonna be filling out forms for the rest of your days.

We also check for other signs of discrimination. Were the correct percentages of your weapons built by approved minority vendors? Were your explosive belts manufactured by non-union labor? Were you using hurtful language while you were tossing grenades at us? Is everyone in your death squad being treated equally? These things matter more to us than whether you kill our troops. You see, individuals are replaceable, but progressive values are sacrosanct. And if you attack our values, you’re going to be explaining yourself in remedial education sessions and you’re going to be doing a lot … and I mean a lot … of writing!

Although the new White House directive is largely incoherent, civil rights lawyers believe it offers a long-sought compromise between conventional combat and the ACLU requirement that “enemies be treated as though they are United States civilians.” As one Iraqi insurgent put it, “We can withstand your guns and tanks, but please, kill us all before you inflict more sensitivity training!” In fact, the very thought of such punishments has made even the most battle-hardened insurgents whimper for mercy. 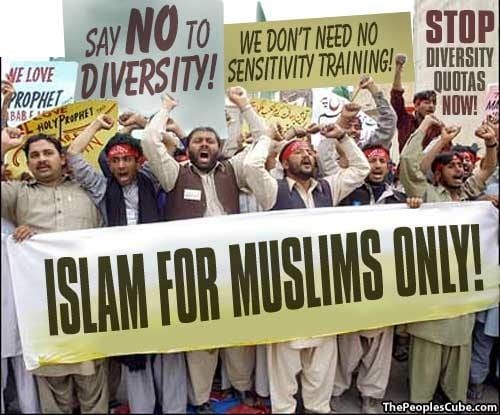 But a sizable number of former Islamic radicals have also expressed willingness to convert to the progressive radical faith. Says one:

The God of Progress is twice more powerful than Allah, if he is capable of enforcing twice the number of taboos than we ever had in Sharia.

According to a newly converted cleric, the two religions have a lot in common, since they both are self-contained spiritual, economic, and political systems:

What’s different is that your Progressive faith is way more restrictive than Islam. I like that. If our goal is to make humanity suffer, Progressivism is the ticket.

The war is not over, though, as Osama bin Laden is still in hiding. In a taped message, he said:

I will surrender if the United States promises to overlook my family’s lack of compliance with WBE and MBE requirements in their construction business.

But the White House believes that is an irrelevant point. Said one aide:

We don’t care about his family. But he has led an organization that is guilty of de facto religious discrimination. If you’re going to butcher Americans, you had better do it with a diverse group of murderers. Al-Qaeda is comprised only of Muslims, and that’s wrong. We’re going to find Mr. bin Laden, and he will definitely learn what it means to meet diversity goals.