Every now and then, there comes along a local story that warrants greater attention because it represents a microcosm of America. That one of the most successful high school football coaches in the country has called it quits is such a story. Warren Wolf, who coached longer and notched more victories than anyone to ever coach in New Jersey, officially retired last week after coaching Brick Township’s Green Dragons for 51 seasons. Wolf, who turned 81 years young this season, finished his legendary career with two words: “It’s time.”

In his five-plus decades walking the Brick sidelines, Wolf coached his way into the history books, finishing with an astounding record of 361-122-11. He coached eight undefeated teams, with 42 winning seasons and only three years with a losing record. His teams won 31 divisional titles, 13 sectional championships, and six state championships.

“I remember every detail of my career because football is my life and has been my dedication,” Wolf said during his retirement press conference. “My wife, Peggy, came before football and football came before everything else. Nothing ever gets in the way of football and that’s what I expected from my boys and my coaches.”

I was one of Coach Wolf’s players seven years ago. It was sophomore year and nearly all of my friends with whom I played street ball were on the school team — except me — and they convinced me to try out, which I did. While I didn’t see much playing time on varsity that year, Coach Wolf never played favorites or held certain kids to different standards. He was as equally respectful, demanding, and interested in his backup players, such as me, as he was with his starters and all-conference stars. 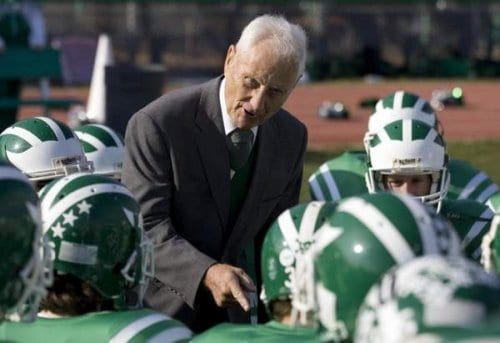 Coach was a tough, no-nonsense kind of guy, and during practices he’d often “get in there” himself, mixing it up physically with young men one-fourth his age and twice his size — an in-your-face style that was unexpected from a grandfatherly figure.

But while his practices were long, brutal, and disciplined, he would never miss an opportunity to inquire about the personal needs of all his players. Between drills, he was likely to ask, in his musky Clint Eastwood-like voice, “How’s school going, Nicky?” If he knew the father or mother of a player was sick, he’d call that player aside and offer assistance and sincere empathy. After games, he would visit injured players in the hospital — both players on our team and the opposing teams. He was as personally invested in the happiness and well-being of the people around him as anyone I have ever met.

Coach used football as a conduit to life lessons. Practices were often a seminar on manhood as much as they were about better blocking from the offensive line. After 9/11, he talked to us about his own wartime experiences in “the big one,” World War II. Like some sage, he’d offer advice, even if inadvertently: “In football and in life, boys, it’s hit or be hit. Hit or be hit.”

While football was a way of life for him, Wolf’s impact on Brick, New Jersey, can hardly be limited to the football field. His effect on this town cannot be measured in sports terms alone.

“Other than my dad, he’s been the most influential person in my life as far as teaching me how to do things the right way, having high character and making that … an important part of how you conduct yourself. He’s been the greatest example I possibly could have had,” Brick High School’s principal Dennis Filippone said.

“He touched so many lives. He saved souls,” Dan Duddy, coach of nearby Monsignor Donovan High School, asserted. “Coach Wolf is without a doubt one of the greatest men another man could meet.”

There were a lot of similar sentiments being shared during Wolf’s goodbye press conference, where Wolf talked in front of reporters, friends, and family about his move from West New York — where he was an assistant under his mentor, the famous Coach Joe Coviello — to a little-known town called Brick, “wherever the hell that is,” Wolf jokingly recalled. The year was 1958 and by a stroke of serendipity Wolf was named the first football coach for the new school, a job he retained for over a half century.

What makes Coach Wolf such a rarity nowadays is not only his unprecedented success or his longevity, but his dedication to the same community for so long. After his first, second, or even third of many championships, Wolf could have very easily gone on to bigger and better things than Brick High School football. By his second decade coaching, he had already become a Garden State legend, and no doubt more prestigious, collegiate coaching opportunities presented themselves.

If he wanted, he could have ended up like his good friend Joe Paterno at Penn State. The two would talk football until the early hours of the morning. “We’d close the bar,” says Wolf, recalling how he and a young Paterno used to draw Xs and Os on cocktail napkins.

Instead Wolf chose to stay close to home, serving as mayor of Brick, Ocean County freeholder, and New Jersey assemblyman — amongst other things — throughout the years. After his retirement ceremonies last week, Wolf humorously remembered how, when he first moved to Brick in the late 1950s, the town was so desolate it did not even require its own exit on the parkway. How things have changed since then …

In many ways, Warren Wolf’s life is the quintessential twentieth-century American experience: marry the high school sweetheart, join the service, use the G.I. Bill to get through school, and if you’re lucky, find a slice of heaven somewhere, settle down, and start a new life. In an era where students coming out of school are looking for work and excitement in the “big city,” the aforementioned lifestyle — Warren Wolf’s decision to dedicate himself to Brick — is on the wane. Rather than bolt the small town for the galore and opportunities of the city, Coach Wolf hung around town long enough until it became a city.

“The world just keeps changing,” Brick Mayor Stephen Acropolis said, “but the one thing you could always count on was seeing Warren Wolf marching along the sidelines, encouraging his players.”

“Our town is going to be a different place.”

They don’t really make ‘em like that anymore, do they? It’s no longer vogue to turn down prestige over principle. Technology and the information age have made it possible to know the details of what’s happening on the other side of the world — and sometimes we overlook what’s happening in our own backyard, with our friends and neighbors. The world has gotten smaller and our worlds have grown bigger. Loyalty to locality means less than what it once meant.

Warren Wolf cared what happened in his backyard. He cared what happened to his friends. “Friendship is treasure,” he said to the press conference cameras. He became a grandfather of thousands and an icon of a community, and in the process put a city on the map. Every town in America could use a man like this.

N. M. Guariglia writes on foreign policy. He can be contacted at [email protected]
Read more by N.M. Guariglia