PETA Becomes a Parody of Itself

So you’re sitting down to your usual morning fare of bacon and eggs, you open the paper, and you see a full page ad that seems to be about the poor guy who had his head chopped off by a maniac on a Greyhound bus.

But you read further and you see it’s not about that at all. It’s about your breakfast. 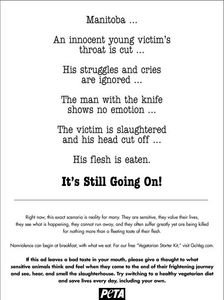 The ad was rejected by its intended paper, the Portage la Prairie Daily Graphic, but PETA’s point was made, thanks to their publicity machine.

Then again, was the point really made? Or has PETA become a parody of itself?

The tactics of extreme activists like PETA, ALF, and ELF used to shock me . I would find myself getting worked up about PETA’s posters and pamphlets on an almost weekly basis. Even groups like MADD or thetruth.com would infuriate me with their use of fear as a weapon to fight for their causes.

But PETA’s current attempt at activism only made me shake my head in dismay.

Who are they trying to reach with this? If PETA is attempting to convert people to veganism or, at the very least, get carnivores to think twice about eating meat, they are going about it the wrong way. The problem with such activism is it preaches only to the choir. No sane person is going to be moved by an ad equating the tragic beheading of a young man with eating breakfast sausage. Not even a person teetering on the border between chicken and tofu would look at something like this and say, “Well , my mind is made up. This upstanding, honest, respectable organization has convinced me with their well thought out Mommy Murders Animals comic book!”

I have no problem with PETA’s message, and I have nothing against people who want to save the environment, save the whales, feed the children, hug the trees, or make this world a better place in their own special way. It’s not the message, nor even the messenger. It’s the way the message is delivered. Maybe if these groups didn’t use the equivalent of a letter bomb as means of delivery, more people would take them seriously.

Look at what some of these organizations stand for. Their ideals are not bad ones, and they only have your best interest at heart. They want you to eat healthy. They want the little bunnies to frolic in the woods instead of being used to research the latest mascara. They want cows to wander the fields forever, the earth to always be green, the skies to always be clean, the obliteration of nuclear weapons, world peace, and a better, cigarette-free world For The Children. Seriously, who could argue with those things? It all sounds so utopian and wonderful.

What I’m not willing to do is listen when I am being talked at. But that is how most of these activists groups engage others. They preach instead of explain. They yell instead of talk. They resort to tactics that make their organizations look like a three-ring circus. One without elephants, of course.

The message is lost on all but those who are already convinced. So what good is it? Is destroying property and setting fires for your cause going to convince people to back it, or will the act overshadow the meaning? If standing out in front of a circus telling small children that they support the death of animals is only going to irritate people, why do it? Wouldn’t it be better to present your message in a way that’s kinder and gentler? After all, you catch more flies with honey than vinegar, right? (Sorry PETA. I forgot honey equals enslavement.)

So I have to wonder, are these organizations really trying to recruit people with ads like this, or are they just talking — and preening — amongst themselves? Because if these groups want more people to listen to them, they are going to have to speak to us rationally. We may not convert, but at least we won’t write off their cause as one made up of lunatics and hypocrites. Benevolent names like Freedom Fighters isn’t going to keep people from seeing through the “we care” front they put up when they resort to acts of violence, eco-terrorism, or even mentally assaulting the children whose future they proclaim to fight for.

When I first saw the linked truth.com ad, I was sitting in my living room with five teenage boys. At the end one of them said, “These commercials make me want to start smoking just to spite them.” The other boys laughed and agreed.

This is the reaction to extreme activism. I know every time I see a PETA ad I have this strong desire to go eat a rare steak. I confess: I had frog legs at dinner last night while I was discussing this subject, and just talking about PETA’s previous campaigns made me enjoy those legs even more.

I don’t want to be like that. I pride myself on having an open mind and being willing to listen to other points of view. Unfortunately, many groups like PETA fight their battles with violence and apathy toward other human beings. As a result, regardless of whether they are trying to recruit, brainwash, teach, or just make themselves noticed, their messages are being lost amid the fire and brimstone preachings of their faithful. All we are seeing is the fire.

If PETA really wants me to think about my breakfast, to really examine whether I want to eat a cute little pig as my first meal of the day, they need to tone down the rhetoric and intentional offensiveness and bring something more to the table than what amounts to the equivalent of a Jack Chick tract: something to make fun of or be repulsed by, but certainly nothing to be taken seriously.