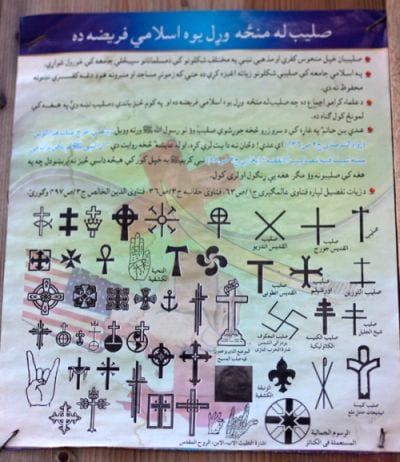 US Army MEDEVAC helicopters in Afghanistan are marked with Red Crosses. Helicopters sporting a Red Cross are not allowed to be armed. The enemy knows this. The enemy tries to shoot down these unarmed helicopters with the added advantage that our people cannot shoot back.  And so, we push people into combat while advertising to the enemy that our people are unarmed.  The best that can be said for this policy is that it’s wrong. The worst that can be said might be that it borders on criminal.

We like to think that after a decade of counterinsurgency, we have learned something. Have we? What does a cross on a helicopter mean? For some Afghans, it’s a mark of the beast. The poster above was hanging on a wall in eastern Afghanistan.

Of the approximate fifty evil symbols, most are crosses. Even the shape of an anchor is seen as unholy.

*Destroying the cross is an Islamic obligation*

1. Christians want to publish and spread their unholy and cursed religious logos and signs in different shapes and appearances in clean and holy Muslim society.

2. These Christianity signs (Crosses) have affected our Islamic society too

— even our mosques and our Menbers are not safe from those Christianity signs (Crosses).

(Further note from my Afghan friend explaining “menber”: When you enter a mosque, the menber is a chair in the most forward point. After the prayer is done, a mullah sits on that chair and enlightens people. Talking rubbish about how to be a good muslim or other nonsense. That chair is higher than the regular ones in terms of height. It’s higher in order to enable the mullah to see all the folks and the folks seeing mullah – even the ones sitting far away. Menber is the written name of it.)

3. The respected Ulemas agree over the fact that destroying these crosses is an Islamic obligation and on whatever object or surface where there is a cross, praying is a sin.

4. —– had a gold cross in his neck and prophet Mohammad told him to remove that ‘idol’ from himself and is narrated from Aisha that prophet Mohammad never allowed anything in his house with a cross on it and used to destroy or throw it away.

*Some of the names on the crosses:*

6. Cross in shape of the Nazi logo

The Army has not a single valid reason for sporting the Red Crosses. Army leadership should hang its head in shame for willfully endangering troops and the mission by sending unarmed troops into combat, signaling to the enemy that they are unarmed, all while elegantly marking our helicopter with what to many Afghans is a mark of the beast.

If the Army insists on sending unarmed troops into combat, it should at least remove the crosses that alert the enemy that the helicopter is unarmed, all while inflaming local passion to shoot it down.

Michael Yon, author of Moment of Truth in Iraq: How a New 'Greatest Generation' of American Soldiers Is Turning Defeat and Disaster into Victory and Hope, spent more time embedded with U.S. and British combat troops in Iraq than any other correspondent. Michael Yon has changed his focus to Afghanistan.
Read more by Michael Yon