Painting What Can't Be Seen

Botanical artists hang out at the local gardens or — if they are highly motivated — travel to tropical islands to depict flora in their native habitat. Wildlife artists journey to the Serengeti or the Rocky Mountains to hone their skills. But what’s a space artist to do? The farthest humans have ventured is to the Moon, but astronomical art calls for artistic voyages to the frigid moons of Jupiter or even the desolate landscapes of planets circling other stars. The challenge presents some horrific travel expenses! Instead, the space artist relies on the powerful tool of comparative planetology: the artist studies the geology of the Earth and other worlds, finding terrain on terra firma that bears similarity to the geology of Mars, Venus, or a host of other targets.

Space art has its roots buried deep in history. The process of painting a scene or object which no one has seen first-hand is a process that reaches far into the past. Explorers throughout the ages have brought artists along to document discoveries and foreign vistas. The paintings of Albert Bierstadt and Thomas Moran helped to convince the U.S. Congress to found the first two national parks at Yellowstone and Yosemite. Frederick Catherwood documented the discoveries of Maya, Aztec, and Incan ruins by John Lloyd Stevens. Frederic Church mounted expeditions to Antarctica, South America, and other environs to create some of the most beautiful natural science paintings in history.

Today we have new kinds of explorers, venturing into even more remote frontiers. Some wear space suits, while others dress in solar cells. They all return tales from their travels, and the artist must translate these tales into something on a human — and aesthetic — scale.

Spacecraft are returning with vast amounts of data. We have recently seen the moons of Saturn, from less than a 200 km distance, through the eyes of the Cassini/Huygens mission. Twin Mars rovers Spirit and Opportunity continue to explore the sands of the red planet Mars, having lasted over five years (their design lifetime was 90 days).

Space artists did not always have it so good. In the early 20th century, most of what we knew about the skies came through telescopes. We had no close up images of moon geysers or Venusian summits. The grandfather of modern space art was, in fact, an astronomer. Lucien Rudaux was a careful observer, using the telescope of the Meudon Observatory outside of Paris, France. His oil paintings of Mars viewed from its moons, of Saturn and Jupiter, and of Martian dust storms still hold up remarkably today.

A view of Mars seen from its outer moon Deimos, by Lucien Rudaux, ca. 1930s

In the 1950s, Chesley Bonestell popularized space art by illustrating a series of articles by Willey Ley and Werner von Braun. His art depicts people exploring Mars 15 years before the first spacecraft arrived there. As science matured and we learned more about the planets, so space art matured, becoming more accurate and, in some ways, more sophisticated as a pure art form.

Paint what you know

The most Earth-like planet we know is Mars. Mars is a cold, desert world where summer heat waves scarcely reach the melting point of water. Its air pressure is equivalent to Earth at 100,000 feet. Despite its alien environment, wide expanses of Mars resemble our own planet’s arctic and subarctic regions. Mars has been scoured by winds, torn apart by volcanoes, ripped by meteors and asteroids, yet looks like the Earth in many places.

Terrestrial desert regions provide natural analogs to Martian landscapes. In California’s Mojave Desert, Death Valley has a specific region named by artists “Mars Hill” (the name was later officially adopted by NASA and the Park Service). This rise is peppered with rocks which look strikingly like rocks found at the first Viking landing site on Mars.

and created a beautiful Martian vista hauntingly similar to views we would see twenty-five years later by the Mars rover Spirit.

Mars panorama of the Columbia Hills by rover Spirit

One especially Mars-like vacation spot on Earth is Iceland. While being an arctic region, Iceland has the added advantage of harboring a host of active volcanoes. Volcanism has played an important role on Mars, Venus, and even moons of Jupiter and Saturn. Its interaction with icy conditions makes for unique scenes ripe for the artistic eye. Since Iceland provides a fine example of volcanic action in the presence of cold conditions, and it is far less expensive to visit Iceland than Jupiter, space artists travel to this island nation for excellent field experience. 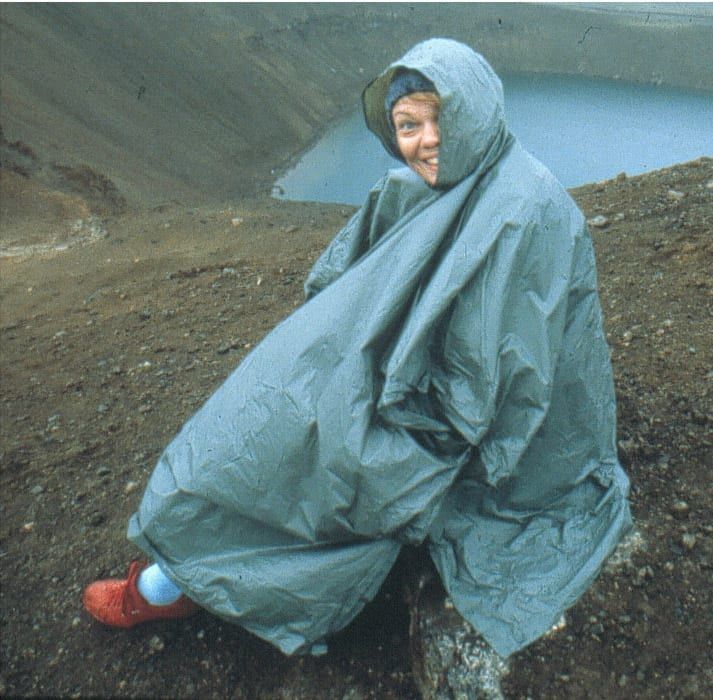 Marilyn Flynn painted in the field at a site called Viti, … 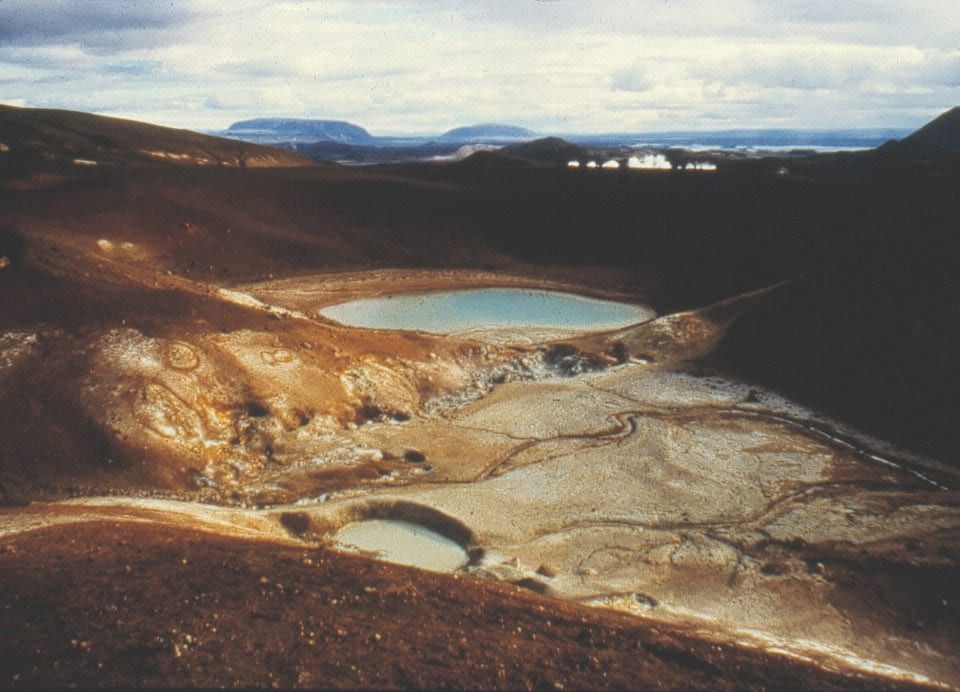 using what she sketched and photographed there–in the rain… 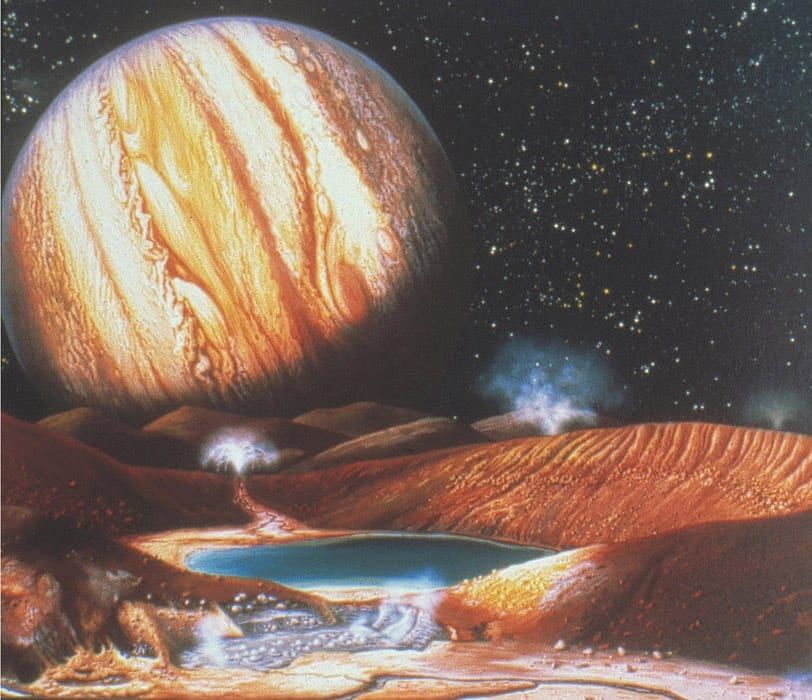 to paint her masterpiece of an Ionian landscape.

The artist has opportunity to not only portray new discoveries, but to anticipate them. Ron Miller painted dust devils on Mars decades before they were confirmed. 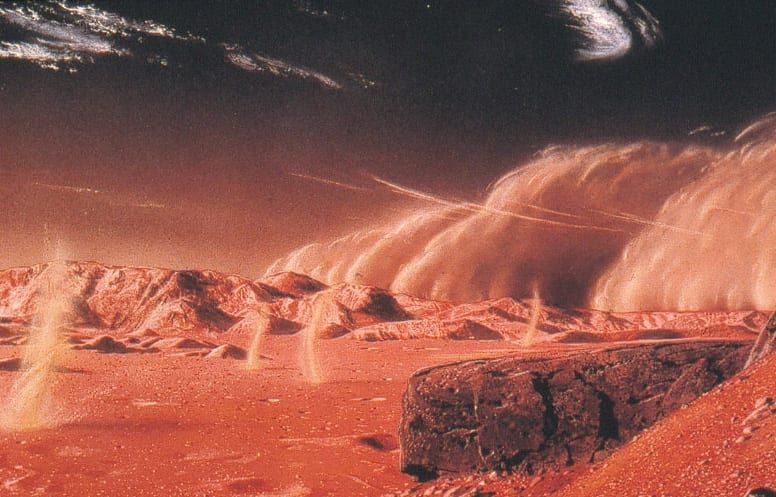 In 1997, the Pathfinder lander caught several dust devils on its imager, and actually charted them moving over the craft with its meteorology instruments. 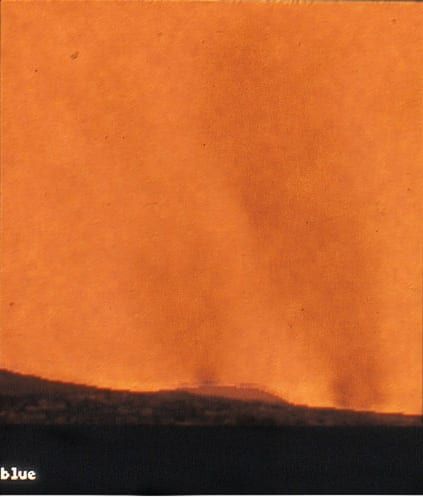 A few years later, the Mars Global Surveyor discovered trails left in the Martian sand by massive dust devils, confirming what Miller had predicted with the paint brush decades earlier. 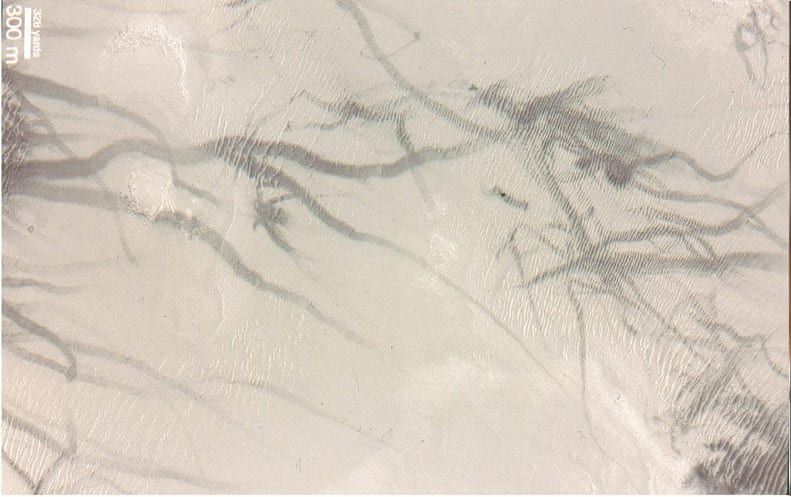 Space artists also venture into the realm of digital art. Some use programs such as Terragen to generate fractal landscapes, often overpainting with software like Photoshop or Illustrator. Others combine a foundation of acrylic painting done traditionally with digital techniques. This was the technique used in this scene, depicting the methane lakes of Saturn’s moon Titan, with a robotic Earth visitor above.

A blimp above the methane seas of Titan

While cosmic subjects are more difficult to paint first-hand than are other natural subjects, artists continue to immerse themselves in the natural wonders of this world, creating views of other planets that await future generations of artists who will actually paint there.

[For more examples of astronomical art, see the Gallery at IAAA.org, the web site of the International Association of Astronomical Artists.]