Why We Need Voter ID, According to Disillusioned Democrat Artur Davis

Davis is the man who seconded Barack Obama’s nomination at the Democratic Party’s 2008 convention. After serving in Congress from 2003 to 2011, he has since left the party, disgusted by the radicalism and race-baiting now in vogue among national Democrats.

Using simple language, Davis explained to an audience this summer that state laws requiring voters to present government-issued photo identification in order to cast their ballots are eminently sensible.

In fact, according to Davis, asking voters to present government-issued photo ID in order to vote is not a burden, contrary to the increasingly rabid claims being propagated by the Left and the mainstream media.

Davis made the comments during a panel discussion on electoral integrity that took place at the Heritage Foundation in Washington, D.C., on July 26, 2012.

Here is a transcript containing the relevant portions of his remarks:

Let me begin — I want to start by showing you something if I can, and it’s obviously something that’s at the core of what it is we’re talking about today.

Perhaps you can’t see it so well if you’re watching this on the Internet, on television, and most of you in the audience can see it all too well — you can see how bad I look.

This is a Virginia driver’s license, also known as a state-issued photo ID. Very small. Pretty innocuous-looking except for the ugly face on it.

It’s a very tiny little thing that will fit in a breast pocket, fit in a wallet — you can carry it next to your pager or your BlackBerry.

It is not a billy club; if you look at it that’s clear. It’s not a fire hose.

I live in Virginia now but I come from the state of Alabama and used to represent Birmingham, Alabama, and Selma, Alabama, in the United States Congress.

I know a little something about fire hoses. It’s not this. It’s not some kind of a weapon or club that southern sheriffs used to use to keep people from voting or participating.

But this tiny little thing I’m holding up in my hand tends to do very weird things to people. It tends to create some very interesting political arguments.

And while I’m not an expert on United Nations terminology, basically they filed a complaint against us with the UN Commission on Human Rights, and the basis for the complaint was the incredibly devastating potential to suppress this little thing I’m holding up, or so they were told.

Now I won’t even get into the fact that Cuba sits on the UN Commission on Human Rights and Cuba would not know a free election if it walked in and did a burlesque dance in front of it.

I won’t get into the fact that China sits on the UN Commission on Human Rights — and China has many great virtues as a great competitor and sometimes partner of ours, but in China, unless you’re one of a small group of provinces that actually do get to cast votes in some of their local races, China has never had a free election in many histories of dynasties and centuries. They make us look like the rookies as old as that civilization is; they have never had a free election.

Saudi Arabia sits on the UN Commission on Human Rights. Saudi Arabia occasionally experiments with voting, but if you’re a woman you’re not part of the experiment.

You get my point. Not quite the group I would expect to judge our integrity when it comes to elections.

[South Carolina] Attorney General [Alan] Wilson touched on this [during today’s panel discussion], some other speakers touched on it. You know the arguments on the other side, and frankly the most powerful argument rhetorically on the other side is, oh, to have photo ID it will have this effect of diminishing participation, it will have the effect of crushing the ability of all kinds of people who wish to vote, and they’re talking very candidly about many of our minority citizens.

Remember when we were told four years ago about the seniors who were in their eighties who never missed an election and who were so motivated to get involved in politics right now in this season? Now we’re told that those same people who were so fired up and ready to go and so motivated and cared so much about their country, now we’re told that they’re so fragile and so weak and so marginalized and so isolated that they don’t have an ID and couldn’t be bothered to get one.

You take my point.

We have had our share of suppression, particularly in the American South. There’s no question about that. But this is not suppression.

This is a simple little device that you use all the time. When I leave here I have to hightail it to the airport because I’ve got to speak in Salt Lake City tomorrow. I won’t get on the plane if I happen to leave this here.

And finally, we have our friends in the news media, and I love the definition of objectivity with journalists. Objectivity to a journalist means I think the opposite of whoever I’m interviewing. 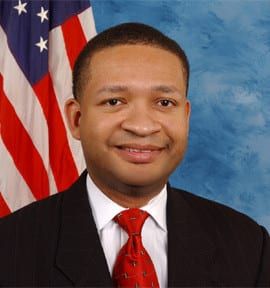 I did an interview a few months ago with a news organization about this very issue and they asked me what they thought were some pretty tough questions.

When I went to the news organization to do the interview, the first thing that was sitting on top of an ominous-looking security guard who looked a lot scarier than this was a sign that said “photo ID required — no exceptions.”

Which, by the way, is more than most states which permit a number of exceptions.

So, I’m glad to be here. Make sure I don’t leave this little thing as I go to catch my flight.

Later, in response to a question from a member of the audience, Davis said:

The issue is whether it’s an unreasonable burden to make someone produce photo ID or some equivalent [to] photo ID.

We might debate the public policy all we want. The courts are looking at these issues, that’s the only thing courts are looking at, [whether it] is an unreasonable burden and the reason that we keep talking about the ubiquity of driver’s licenses. The reason we keep talking about the fact that ID is common, is not that we’re trying to just make a debater’s point, but we’re trying to say that, how can it be a burden to ask people to do something they do all the time?

That’s all this comes down to.

How can it be a burden to ask people to do something they do all the time?

Congressman Davis, the question answers itself, but thanks for asking nonetheless.

It’s not like the Left, which relies on voter fraud to win elections, will ever ask.