Just how “racist” is he?

“Incredibly racist,” professional left-wing organizer Becky Bond told attendees at the Campaign for America’s Future’s recent Take Back the American Dream conference in the nation’s capital. Bond is president of the well-funded Credo SuperPAC, an outgrowth of Credo Mobile, the wireless reseller that donates part of its profits to leftist groups such as the George Soros-funded Media Matters for America, the ACORN-affiliated Project Vote, Color of Change, and the Sierra Club Foundation.

Yes, that’s all of the evidence.

“One of our organizers caught him on tape saying” the above statement, boasted Bond. “It’s been all over the news and [is] also being shared on Facebook,” she said as she displayed Walsh’s damning admission of, errrrrr, well, whatever it was he admitted, on a projection screen to drive her point home.

If you’re a rational person with even a smidgen of reading comprehension, you’re probably having difficulty right now trying to identify the precise passage above that proves Walsh is racist. Liberals have been crying wolf about racism for decades, thus diluting the meaning of the term, so it shouldn’t be all that surprising when many of them lose the ability altogether to even understand what the term actually means.

Bear in mind that Walsh didn’t say that one race was better or worse than another. He didn’t argue for preferential or discriminatory treatment for anyone. His statement was about Democrats and how they harm Hispanics and African-Americans by using them to advance the leftist agenda.

Walsh simply offered a conventional sociopolitical critique of how the Democratic Party uses class warfare and identity politics to build and maintain political power. As former welfare mother Star Parker wrote in Uncle Sam’s Plantation, “A burgeoning lower class of people dependent on the government will likely continue voting for the party that keeps the handouts coming[.]”

If Walsh wanted to politely describe Democrats, he might have called them “social justice advocates.”

If he wanted to be more blunt, he would have called Democrats “poverty pimps.”

It makes no difference to San Francisco-based Bond and the legions of latte liberals across the fruited plain who foam at the mouth whenever anyone commits the unpardonable sin of telling the truth about the Democratic Party, which has always been the party of race-baiters. It is the party of Bull Connor, Orval Faubus, George Wallace, and Sen. Robert C. Byrd (D-W.Va.), who had worked as a paid community organizer for the Ku Klux Klan. It is the party of Jim Crow. It is the party that fought vehemently against the Civil Rights Act of 1964.

Democrats whose job requires self-delusion about the race-baiting nature of their party quickly condemned Walsh.

Walsh’s Democratic opponent in the upcoming general election, Tammy Duckworth, was officially offended, calling his comments “not only offensive, [but] especially irresponsible coming from a sitting member of Congress.”

Jesse Jackson Sr., a shrewd opportunist who has long made a handsome living by promoting government dependency, was haughty on cue. The undisputed heavyweight champion of shakedowns said Walsh’s statement constituted an attempt to “incite and polarize” voters. One can almost hear a laugh track in the background as the professional polarizer claims his life’s calling has been to “gain for all vulnerable Americans equal protection under the law.”

Walsh’s mundane observation may be American Politics 101, but Bond’s group still wants to make an example of him for daring to speak what to Democrats is an unpalatable truth. The group is enraged because Walsh is calling out Democrats for their nonsense.

It needs to be said that Bond probably isn’t calling Walsh racist because he’s actually racist. If Bond actually possessed any credible evidence of Walsh’s supposed racism she would have presented it. This is all she and the other leftists who for years have been smearing the Tea Party movement as racist have remaining in their quivers.

Anybody stupid or evil enough to oppose President Obama’s socialist juggernaut must be racist, they reason. This is the only way that opposition to left-wing utopianism makes sense to Democrats. 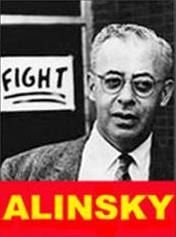 In Rules for Radicals, Saul Alinsky told leftists how to vilify an opponent. Bond openly embraces the Alinsky playbook.

“We pick out a villain, we go after them hard,” said Bond, in an apparent reference to Alinsky’s 13th rule of “power tactics.” (“Pick the target, freeze it, personalize it, and polarize it.”)

“We harness people’s passions. We don’t ask them to go out and be polite.”

“Credo volunteers are out there saying this guy is too racist to be in Congress and that’s a really strong statement to be made and that’s what’s motivating the volunteers to get out there and defeat this guy,” Bond said.

“We have an office near Schaumburg, Illinois, and have four paid organizers and we have hundreds of volunteers coming out to work against Joe Walsh every day.”

But Walsh is just one of Credo’s targets.

Walsh is being targeted as part of Credo SuperPAC’s “Take Down the Tea Party Ten” campaign. Eight enemies have been selected so far. The other Tea Party-friendly Republican congressmen with bullseyes painted on them are Allen West (Fla.), Steve King (Iowa), Dan Lungren (Calif.), Mike Fitzpatrick (Penn.), Frank Guinta (N.H.), Sean Duffy (Wisc.), and Chip Cravaack (Minn.). (I wrote about the Credo assault on West previously on PJ Media.)

Credo SuperPAC hasn’t let facts get in the way of its campaign against Walsh.

The group also won’t let facts get in the way of its attacks on other Tea Party lawmakers.

Brace yourself. You ain’t seen nothin’ yet.