A Hairdresser, a Hijab, and a 'Hate Crime'

“Nothing ventured, nothing gained” is a cliché, but it has served us well because it appeals to our sense of fair play. Those who take risks and make sacrifices for uncertain rewards deserve those rewards if they come.

Sarah Desrosiers, owner of London’s Wedge Hair Salon, took risks and made sacrifices. A senior stylist in an established west London salon, she gave up this relative security, took out a loan, and invested her £5,000 ($10,000) savings in the lease on a small salon in north London. There was no guarantee that Desrosiers’ salon, which specializes in “urban and edgy” and “funky” cuts, would succeed, however hard she worked. And she worked hard. From the Daily Mail:

I was prepared to put my heart and soul into my business in order to make ends meet, and for the first few months, I worked 12 hours a day, six days a week, all by myself.

Risk and sacrifice are not enough: a good businesswoman has judgment. So when Desrosiers advertised for a junior assistant, it was reasonable for her to exercise her judgment as to who would fit the image of her “funky” salon:

“I sell image — it’s very important — and I would expect a hair stylist to display her hair because I need people to be drawn in off the street,” said Ms. Desrosiers. “If someone came in wearing a baseball hat or a cowboy hat I’d tell them to take it off while they’re working. To me, it’s absolutely basic that people should be able to see the stylist’s hair.”

Muslim applicant Bushra Noah, pictured below, does not fit the image. She is pointedly, reproachfully un-funky, a silent admonition to those infidel women who dare to flaunt their hair and a deterrent to precisely the kind of customer Desrosiers wishes to attract: 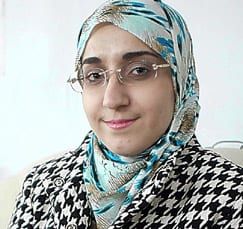 Rightly turned down for the stylist job on the grounds that she refused to remove her headscarf and display her hair, Noah sued Desrosiers for religious discrimination and “hurt feelings,” seeking damages of £34,000 ($68,000). When I wrote about this case in May, I assumed common sense would prevail and it would be thrown out. Not so. While the direct discrimination case failed, those “hurt feelings” netted Noah £4,000 ($8,000) of Desrosiers’ money. Not bad going for a ten-minute interview. Nice work if you can’t get it. I should be so hurt.

Desrosiers railed against this injustice:

I’ve worked hard all my life — how can it be possible that someone can come into my shop, talk to me for ten minutes, and then sue me for £34,000? How is that possibly fair?

Desrosiers risked. She risked her savings and her security, and was punished for refusing to risk still more. Significantly, the employment tribunal overrode her judgment, concluding that “there was no specific evidence before us as to what would (for sure) have been the actual impact of the claimant working in her salon,” and that it “doubted whether the risk was as severe as the owner believed.” That is easy for them to say. They do not bear the risk. The only way to provide the required “specific evidence” would be for Desrosiers to employ Noah, lose business, and perhaps go bankrupt. The time spent preparing her defense cost Desrosiers an estimated £40,000 of the salon’s income and many sleepless nights. The case cost Noah, who, being unemployed, must have received legal aid from the British taxpayer, nothing at all. Desrosiers risked and Noah was rewarded.

Likewise, Desrosiers made sacrifices and was punished for not sacrificing still more — for someone else’s freely chosen religious convictions. Most religions require conservative dress, particularly of women. Conservative dress is not compatible with a “funky” workplace, but why should a devoutly religious woman mind? Forgoing the opportunity to work in an “urban and edgy” salon would seem a small price to pay for God’s approval. Wouldn’t God prefer Noah to work in a more traditional salon? And shouldn’t Noah accept this sacrifice as part of the deal? It seems not. Islam demands sacrifice, but the sacrifice must be made by the unbeliever, not the Muslim. Desrosiers sacrificed, but not enough. And for Noah? Nothing ventured, everything gained.

What lesson would an immigrant to this country learn from the Noah-Desrosiers case? What lesson, indeed, would any “disadvantaged” person learn? That he should work hard, take risks, brush off insults, and prove the others wrong? On the contrary, he will learn that “hurt feelings” are what we British call a “nice little earner.” There’s money in outrage, so cry all the way to the bank.

Lucrative outrage is not confined to the Muslim community, but Islam, in its current form, seems to encourage it. A Danish newspaper nobody’s heard of prints some nasty cartoons? Riot. The pope says something you don’t like? Riot and bleat. Ezra Levant reprints the cartoons? Sue — your “human rights” have been breached. Mark Steyn expresses concern about Islamic demographics? You don’t get the job you want? Bleat, whine, and sue for hurt feelings. It beats working for a living.

Islam is doing what Islam has always done: taking territory by any means possible. For Muslims in the West, tears are more effective than guns. We cannot stop Muslims complaining, but can ensure that the squeaking gate does not always get the oil.

Recently, British blogger David Thompson wrote about novelist Ian McEwan’s criticism of Islam, or rather the reaction to it by two journalists for the Independent, Popham and Portilho-Shrimpton:

The novelist Ian McEwan has launched an astonishingly strong attack on Islamism, saying that he “despises” it and accusing it of “wanting to create a society that I detest.” His words, in an interview with an Italian newspaper, could, in today’s febrile legalistic climate, lay him open to being investigated for a “hate crime.”

Under what legislation is not clear. In any case, as Thompson points out, criticism of Islam is not unfair:

What’s unfair, indeed despicable, are efforts by Islamic groups to cow dissent and stifle criticism with a well-rehearsed pantomime of victimhood and the projection of false motives. Pretending to be hurt in order to assert one’s will over others, or to gain unreciprocated favors, or to exert control over what others may say and think, is cowardly and malign. Let me say that once again. It’s cowardly and malign.

Increasingly, in Britain and elsewhere in the West, “cowardly and malign” is rewarded. Fortune no longer favors the brave, but the bleaters. This must change. Turning a deaf ear to the “hurt feelings” of Muslims is a good place to start.