It’s become obvious what the protesters mean by “changing the narrative” as I roam Tampa during the convention. They know, of course, that they are not going to change the minds of Republicans; confrontational anti-Romney traveling billboards (sponsored by the DNC) will not change anyone’s mind, nor will the recycled Occupy Wall Street themes. The Tampa protesters are instead using the Saul Alinsky tactics of demoralization by intimidation: make the Republicans angry, then taunt and mock their reactions. Psychological warfare.

No protester here appears interested in a debate or a dialogue, despite making the claim. On Sunday afternoon, a number of protesters embedded themselves in the audience of Scott Walker’s talk and simply disrupted him, just as they did at CPAC. They are here to shape the narrative, intent on shifting media focus to them and their message.

The protesters have forced the expenditure of public money for a 3,000-member police force drawn from 59 agencies because of threats from various groups. When only some 200 protesters showed up, they were able to place quotes on the evening news relating that the cautionary police presence reminded them of a “police state.”

I witnessed this impressive police force display the professionalism to shrug off taunts. One protester remarked: “The circus must be in town, the pigs are out,” and actually received a friendly joke in return. Which was wise, as the ACLU and National Lawyers Guild watchers were on hand, ready to get frivolous. ACLU distributed detailed brochures regarding protesters’ rights; the National Lawyers Guild watchers wore identifying hats to let everyone know they were there: 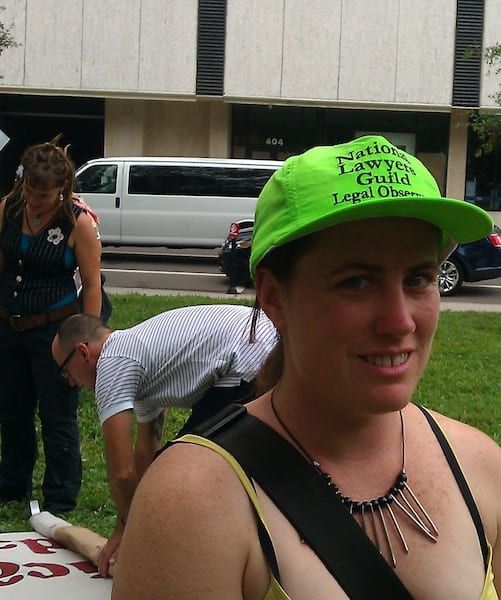 In Gaslight Park on Sunday, a protest displayed inscrutable vitriol towards the Republican Party. A sign read illogically: “Stop the Romney Economy. We are the 99%.” Is Romney currently controlling an economy? 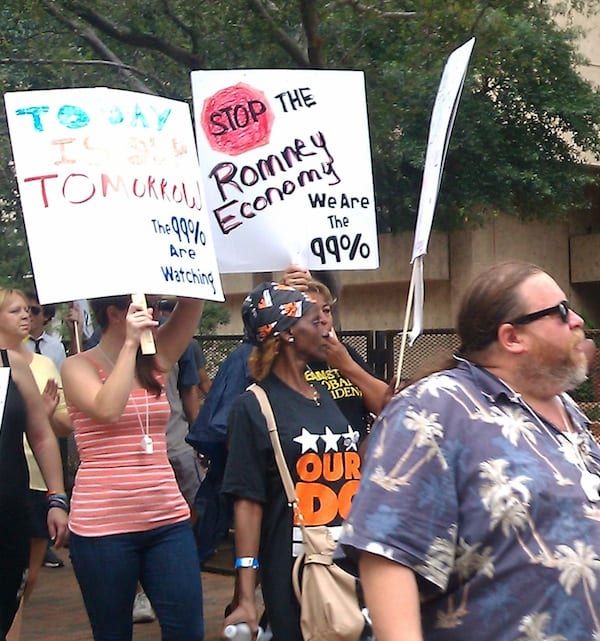 A dozen or so Code Pink protesters — no longer terribly concerned about American soldiers dying in the Mideast as they were during the Bush years — railed against a “War on Women.” Their focus was on … vaginas.

Signs read: “GOP Respect Women” and “Vagina. If you can’t say it, don’t legislate it”: 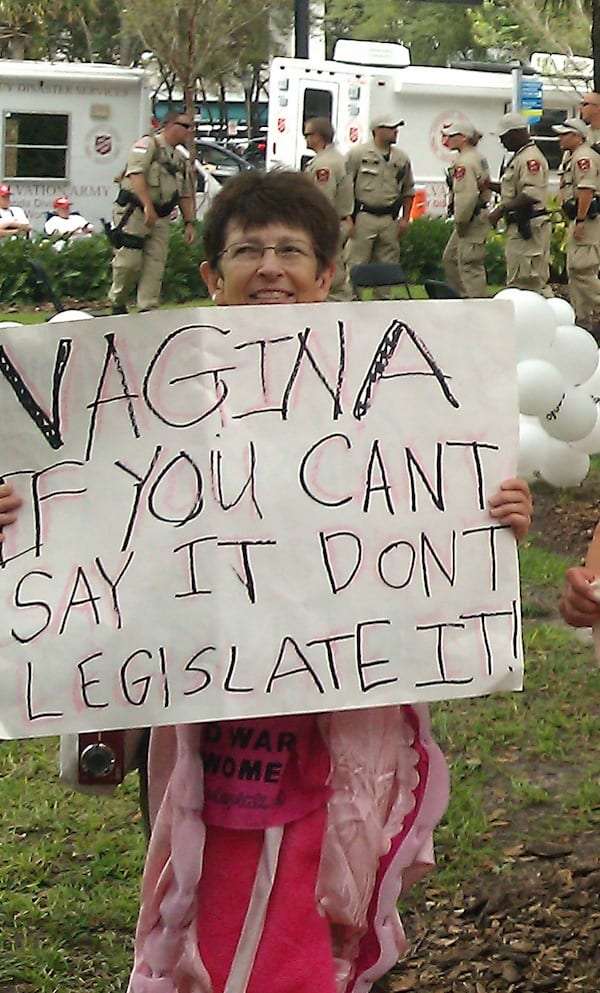 Of course: no concern was expressed about a war on a conservative women, like Sarah Palin. The talk around Tampa for weeks before the convention was about the booming business that strip club operators hoped to receive from conventioneers. The mayor got in on the act with the club owners, and insulted his Republican guests by joking about a stripping Palin impersonator.

The “Republican hypocrisy” narrative was made to order for the media. The majority of delegates could be planning to attend prayer meetings, but the media have and will continue to imply that they are frequenting strip clubs. The private entrances were shown on nightly news programs, no evidence required of either booming business or conservative critics of the clubs being the clients. Local news programs, like Channel 10 News, simply ran with the implication: “Grand Ol’ Party: Strip Clubs Expect Busy Week During RNC.”

At the “Romneyville” camp before a protest march to the convention on Monday afternoon, I overheard a Channel 10 news reporter coaching one of the “Black Bloc” members to push on camera that the group is not violent: “You are there to protect rights, right?” The Romneyville encampment was in one of the most distraught parts of Tampa, a place where the perpetually homeless congregate, some by choice, some because of mental illness and addiction. I witnessed the camp participants’ opinions being given respectable weight by the media — today, one need only hold a sign expressing hatred of Republicans to receive star treatment.

It was quite a thing: an AP reporter treated with all seriousness the ramblings of a member of the “Rainbow Family,” an elderly man in need of hygiene assistance reciting “poetry” on stage, in “the tradition of the Beats.” Recall the AP routinely treats the opinions of Tea Party members — people studying history and the Constitution, law-abiding citizens who are actively and persuasively engaged in the political process — with a brush-off more fitting for this fellow.

The Republican agenda is one of hate — that’s the only message here. It’s the “narrative,” repeated over and over. 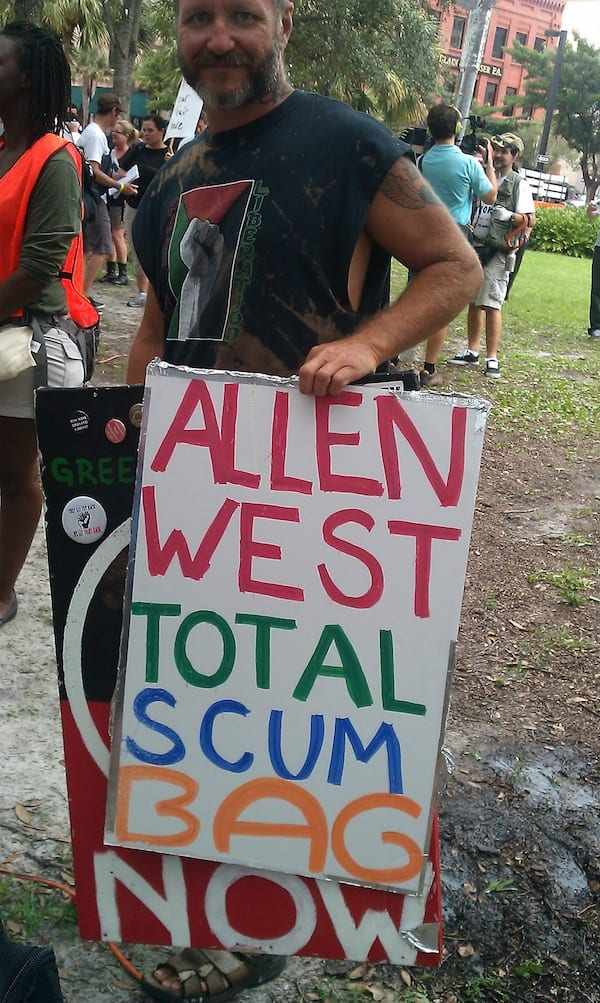 Mary Grabar, Ph.D., a resident fellow at The Alexander Hamilton Institute for the Study of Western Civilization in Clinton, New York, is the author of Debunking Howard Zinn: Exposing the Fake History That Turned a Generation against America (Regnery, August 2019). She taught college English for twenty years and founded the Dissident Prof Education Project. Her writing can be found at www.dissidentprof.com and www.marygrabar.com.
Read more by Mary Grabar
SHOW COMMENTS