Have you heard the rumor? 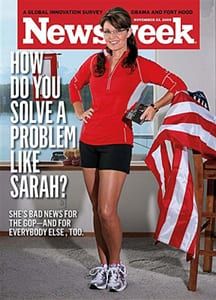 Former Alaska Governor Sarah Palin will announce her decision this week regarding whether or not she will seek the 2012 GOP presidential nomination. Problem is, she tweeted, nobody told her.

No matter. With Congresswoman Michele Bachmann (R-MN) and Texas Governor Rick Perry surging in the polls — as Palin remains comfortably ensconced in a strong second place — it feels right.

But it must be an excruciating decision — less than three short years after she splashed onto the national stage when she accepted Senator John McCain’s nomination to be his running mate on the 2008 GOP presidential ticket.

Of course, it was a great first impression, after which she was soon engulfed in a swell of bad press, starting with “Trooper-gate,” suggesting she was too green to fill the shoes of vice president, which was confirmed as the campaign progressed.

You see, being a VP nominee is akin to sitting in that carnival contraption where, if someone hits the bull’s eye, you’re dunked in water.

Sarah Palin didn’t take kindly to being dunked in water. She tangled with the staff of McCain-Palin ’08 because she was being treated poorly, which surely she was — not understanding that’s par for the VP course.

On the positive side of the ledger: Palin was/is a star on the stump, electrifying an audience like nobody’s business.

Washington Post’s Phil Rucker — like me, invited to a private screening — told Lawrence O’Donnell on The Last Word that it’s “professionally done” and shows how truly accomplished Palin was as governor of Alaska, at one point registering 80% approval; albeit, he noted, the film has “not a single dissenting voice.”

It’s a stunning, Reaganesque portrait. What she accomplished in 18 months as governor of Alaska, most notably on the energy front, is testament to her political and policy understanding and skill — and her forbearance.

Specifically, she shepherded through legislation other governors had tried, but failed, to pass for decades, including initial legislation for a natural gas pipeline; oil tax reform garnering billions for Alaska and its residents; and a solution by which Exxon Mobil was prodded to start drilling in a leased oil field it had left idle for decades.

The only problem is Sarah Palin — a wild thing in desperate need of corralling — has the tendency to hit the reset button back to negative impressions.

If only McCain had not picked her or she had not accepted. If only  she had not quit the governorship eleven months later. If only she had continued building her impressive governing credentials, starting a legal defense fund to deal with those pesky and frivolous ethics complaints.

If only. How indeed to solve the Palin problem?

She reminds me of great talents in the entertainment industry — Betty Hutton of Annie Get Your Gun fame seems a particularly apt comparison — whose talent overwhelms them, then because they don’t know how to get and take the right direction, their potential is never fully realized.

But it’s not too late for Sarah Palin.

Now that she’s found a great director for her life story, let’s hope she can find a director who can help shape her story going forward in a more focused, strategically effective way.

FDR had his Louis Howe; Ronald Reagan had his Lyn Nofziger. The question is will Sarah Palin find someone who can guide her out of rogue territory, deftly shaping her into a towering figure who can accomplish for America what she did for Alaska.