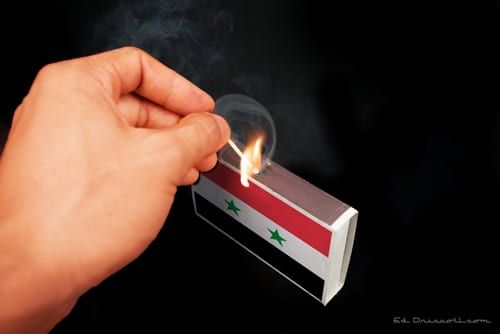 In the latest blow to supporters of the “moderate” elements among the Syrian rebels, the Harakat Hazm “Movement of Determination” this week announced that it was disbanding.

Hazm was never a large group.  It never possessed more than around 5,000 fighters and was active only in northwest Syria.  But for a period of time, it was held up by those who supported arming the Sunni Arab rebels as the kind of militia that the U.S. and the west could get behind.

It had ties neither to the Salafi jihadists nor to the Muslim Brotherhood. Nor was it given to the kind of open and florid corruption favored by some of the other “secular” groupings in Syria’s north.

Its demise comes in the same week that the U.S. plan for beginning a program to train and equip a force that will fight the Islamic State is set to commence.  The timing is not auspicious.

Hazm’s act of self-destruction appears to be an act of capitulation, undertaken in response to threats from the powerful Jabhat al-Nusra militia, and the capture by the latter of its headquarters.  Nusra, the Syrian franchise of al Qaeda,  is in the process of solidifying its control over north-west Syria.  In so doing, it is slowly isolating and swallowing up these smaller fry.

Among the victims are a number of elements that once featured large in western hopes for the rebellion.  In late October, Nusra destroyed the Syrian Revolutionaries Front of Jamal Ma’arouf.  Ma’arouf had a fair run enriching himself as a petty warlord in his native Jebel  Zawiya region, making deals with regime garrisons and smuggling across the border into Turkey.  In late 2014, the jihadis took him on and soon it was over.

Nusra and Hazm then clashed in February.  Hazm sought refuge by joining the Jabhat al-Shamiyah (Levant Front), a coalition of rebel groups in the northwest supported by Turkey.

However, in recent days, Nusra continued to issue accusations that Hazm was guilty of the murder of a number of Nusra fighters.  The Levant Front, meanwhile, made it clear that it would not stand between the two groups if Nusra attacked Hazm.  And that appears to have been that.  Left exposed without the help of its new friends, Hazm quietly took itself out of existence.

This not very uplifting tale nevertheless contains within it a number of lessons.

As of now, what constitutes  the rebellion in northwest Syria is Nusra, plus the Salafi Islamic Front, plus the Levant Front, whose most significant members are also Sunni Islamist.  But it is the jihadists of Nusra which are the key element.

Jabhat al Nusra receives less media attention than the rival jihadi group, Islamic State.  Nusra has not declared the area it controls to be a sovereign state, much less a “caliphate.’  But in the longer term, it may well be Nusra that establishes itself as the key armed group representing Syria’s Sunni Arabs.  There are  number of signs that the smartest local players are seeing the situation in these terms.

Israel  turns a public blind eye to the prominent role played by Nusra among the rebels in south west Syria.  The Jewish state is determined to prevent either  the Assad regime/Iran/Hezbollah or the Islamic State from gaining a foothold along the border with the Golan Heights.

Privately, Israeli officials are well aware that there is no clear dividing line between Nusra and the rest of the rebellion in the southwest.  Indeed, Nusra is one of the most active elements when there is fighting to be done.

As a result, Israel has made its pragmatic peace with the presence of the jihadists.  Presumably, Israel sees no alternative to accepting their presence if it wishes to keep both the Iranians and IS from the border.  There are voices within the Israeli system that are well aware of the dangers lurking along this road. It is safe to assume that Israel will venture no further down it than it perceives to be absolutely necessary.  But it is testimony to the extent that Nusra has made its presence a fait accompli in the southwest of Syria no less than it is in the northwest, where it has just swallowed the hapless Hazm militia.

Walid Jumblatt, Druze leader in Lebanon, is a good figure to watch if you want to know the direction of the winds at any given moment in the Levant.   Jumblatt always knows to make his peace with rising forces, and to oppose weakening ones, in the classic survival strategy of his Druze people.

Five days ago, Jumblatt in an interview with a regional newspaper reiterated earlier statements according to which he does not consider Nusra to be a terrorist organization.  The latest reports suggest that he may also be negotiating with Nusra over the fate of a very small Druze community in northwest Syria.

What is the significance of all this?  It is the following.  As of today, there are four serious forces on the ground in Syria. They are the Iran/Hezbollah/Assad side, the Islamic State, the Kurds, and Jabhat al-Nusra.  What used to be Syria is divided between them.

This is the unpleasant reality to which prudent local players are adapting, after making their own careful calculation of their interests.

Bigger powers which could change this reality, meanwhile, appear to be flailing in every direction.  The U.S. “train and equip program,” which aims to put 15,000 men in the field against the Islamic State over the next three years, is unlikely to make much of a difference to the picture.   Indeed, given the clear tendency among the rebels to favor Sunni Islamism, it seems quite likely that the U.S. is about to begin arming Sunni Islamists in Syria, even as it gives air support to their rival Shia Islamists in Iraq.