One month ago, a savage massacre of civilians in the Syrian town of Houla led to international condemnation of the regime of Bashar al-Assad and intensified calls for foreign intervention in the Syria crisis. Readers or viewers of initial reports on the massacre may be excused for thinking that the UN observer mission in Syria — or UNSMIS per its official acronym — had attributed responsibility for the killings to Syrian government troops and/or government-affiliated “Shabiha” militias. This illusion was created, among other things, by the frequent inclusion in the reports of statements by UN spokesperson Rupert Colville, who noted that the massacre “appeared” to have been committed by Shabiha militia.

But Rupert Colville is, more specifically, the spokesperson for the Office of the UN High Commissioner for Human Rights (OHCHR). His widely cited remarks were made at OHCHR headquarters in Geneva. Whoever the sources were for his conclusions, they did not include the UN’s own observer mission on the ground in Syria.

The short statement issued by the UN observer mission following its May 26 visit to Houla states unequivocally, “The circumstances that led to these tragic killings are still unclear.” Carefully avoiding any attribution of responsibility, it continues, “Whoever started, whoever responded and whoever carried out this deplorable act of violence should be held responsible.”

In the meanwhile, a report from Germany’s Frankfurter Allgemeine Zeitung (FAZ), which attributes the massacre to anti-Assad rebel forces, has sparked international controversy. Critics have accused the FAZ and other sources, which have likewise reported this alternative version, of disseminating regime “propaganda.” (See here, for instance, and the present author’s response here.)

If, however, the alternative version is indeed regime propaganda, then it would appear that the UN observer mission encountered regime “propagandists” even in rebel-controlled Houla. On June 15, just days after the controversy over the FAZ report first erupted, General Robert Mood, the head of the UN observer mission, held a remarkable press conference in Damascus. Asked about the massacre, General Mood pointedly responded that UN observers had heard two competing versions of what occurred from Houla residents themselves. “The statement we issued after al-Houla is still valid,” he said, which means we have been there with an investigative team. We have interviewed locals with one story, and we have interviewed locals that have another story. The circumstances leading up to al-Houla and the facts relating to the incident itself still remain unclear to us.

General Mood’s response can be viewed here beginning at the 3:10 mark of the video.

What is perhaps most remarkable about General Mood’s comments is that they have been almost universally ignored — and this despite the fact that the video of the press conference has been made publicly available by UNSMIS on the mission’s own YouTube page. As of this writing, the pertinent segment of the press conference video has been viewed all of 130 times (see below screen-cap). 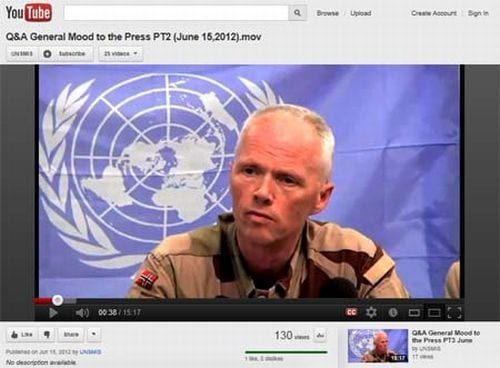 While the Western media makes a standard practice of repeating the claims of Syrian opposition/rebel sources as “news” and dismissing those of Syrian government sources as “propaganda,” the UN observer mission, which was established precisely to provide a neutral fact-finding presence on the ground, would appear to be of interest to no one. As recent reporting by Matthew Lee at the UN makes clear, it would appear least of all to be of interest to some of the very members of the UN Security Council that mandated its creation. (See especially Lee’s citation of German Ambassador Peter Wittig.)

At the June 15 press conference, General Mood went on to say that the mission had assembled a report about the massacre, including the details of witness interviews, and that this report had been submitted to UN headquarters in New York. This raises an obvious question: Why has this report not been rendered public?

For General Mood’s attempt to answer this question and his reflections on the role of media-induced “perception” in the Syria crisis, see part 3 of the press conference video here.

John Rosenthal writes on European politics and transatlantic security issues. You can follow his work at www.trans-int.com or on Facebook here.
Read more by John Rosenthal
SHOW COMMENTS