In a decision that has been little noted by the American news media – and misreported by those news outlets that reported it at all — the International Court of Justice in The Hague ruled last Friday that Germany enjoys immunity from liability for crimes committed by German forces on foreign soil during WWII. (The full text of the ICJ decision is available here.)

The ruling stems from several recent cases in which Italian courts ruled that Germany must pay indemnities to Italian victims of Nazi war crimes or surviving family members. The ICJ found that Italy had “violated its obligation to respect” Germany’s “state immunity.”

The most sensational of the Italian cases involves the Civitella Massacre, so-named for the village in Tuscany that was at the center of a series of indiscriminate “reprisal actions” undertaken by German forces on June 29, 1944. The “reprisals” were carried out by units of the German Wehrmacht’s “Hermann Göring” Division after Italian partisans shot and killed two German soldiers and mortally wounded a third days earlier. Over 200 civilians were killed in the massacres, including women and children. Many of the victims were killed at the Santa Maria church in Civitella, where they had gathered to celebrate mass. Most of the parishioners are reported to have been shot in the back of the head. Germany does not contest the facts of the case.

An AP report on the ICJ ruling, however, fails even to mention the massacres. Instead, it gives the impression that the ruling merely concerns the case of Luigi Ferrini, an Italian civilian deported to Germany to work as a slave laborer. (An abridged and even less informative version of the AP dispatch also appeared as a “news brief” in the New York Times.)

In a bizarre touch, the AP report goes on to note that “although Italy was a German ally during the War, many Italians were deported by Nazi forces, interned in camps and used as slave laborers.” It fails to mention that Italy in fact changed sides during the war, suing for peace with the Allies in September 1943 and then itself declaring war on Nazi Germany. Like thousands of other Italian civilians, Luigi Ferrini was deported to Germany after September 1943. It was likewise between September 1943 and the end of the war that German forces committed numerous massacres on Italian soil. 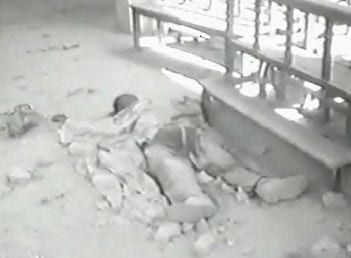 In its reporting on the ICJ ruling, the Italian daily Corriere della Sera lists no less than fifteen such war crimes, involving over 3000 victims, that have been tried in Italian courts since 1994. As a rule, however, the German perpetrators of the massacres have incurred no punishment, since Germany refuses to extradite them. The Göttingen-based activist group “Keine Ruhe den NS-Tätern” — “No Peace for the Nazi Criminals” — maintains a list including no less than twenty-three German citizens who have in recent years been convicted in absentia by Italian courts for their wartime participation in massacres.

Only one member of the list, the former Wehrmacht officer Josef Scheungraber, has faced trial in Germany for his crimes. In August 2009, in a judgment that was widely publicized in the American media, a Munich court found the then 90-year-old  Scheungraber guilty on ten charges of murder for his role in a massacre of Italian civilians in the Tuscan village of Falzano di Cortona. The fact that the court allowed Scheungraber to remain free pending appeal was less publicized. (For further details on the Scheungraber judgment, see here.)

Even though his appeal was rejected, moreover, in August of last year the German daily Die Süddeutsche Zeitung revealed that Scheungraber had yet to serve any jail time and would likely never do so. The prosecutor’s office, the paper explained, had determined that Scheungraber was suffering from dementia and hence would not be able “to understand the meaning of the punishment.” This is to say that like his comrades-in-arms, it appears that Scheungraber will go to his grave as a free man and without having served any time for his crimes.

In light of the unwillingness of German authorities to cooperate with Italian efforts to hold the perpetrators personally responsible, the ICJ’s upholding of Germany’s “state immunity” now virtually guarantees that the Nazi-era crimes will go unpunished.