In late February, back at the outset of the eastern Libyan rebellion against the rule of Muammar al-Gaddafi, I pointed to visual evidence of anti-Semitism and/or “anti-Zionism” among the protestors who provided the initial face of the rebellion vis-à-vis the outside world. Although there were already hints, it was only somewhat later that it became generally clear that the “opposition” to Gaddafi was in fact armed. In the meanwhile, of course, the United States and some of its European allies have entered the fray on the side of the rebel forces, and American and other Western media have become firmly installed in the rebel capital of Benghazi.

As a result we have much more visual evidence than two months ago. Numerous Western media outlets — including the New York Times, National Public Radio, Foreign Policy, and The Telegraph — have indeed run features on caricatures of Muammar al-Gaddafi created by supporters of the rebellion. The caricatures have been painted directly on walls or drawn on paper and attached to them. The sub-title of an April 7 Foreign Policy feature titled “Making Fun of Qaddafi” is representative of the generally cheerful, admiring tone of the presentations in the Western media. “The rebels may not be winning,” the Foreign Policy editors note, “but they’re successfully mocking Libya’s leader — Uncle Curly — with flair.”

But a closer look at the supposedly humorous material reveals the darker side of the rebellion. Two ideological tics stand out with particular clarity. One is the same anti-Semitism or “anti-Zionism” that was evident in the first days of the rebellion. The second is anti-African racism.

The latter is especially notable in light of the extensive video evidence of rebel forces and “protestors” subjecting black African prisoners to horrific abuse. The black African prisoners captured by the rebels are commonly described as “mercenaries” by both rebel authorities and Western media. It is clear, however, that many of the victims of abuse were in fact regular members of the Libyan army. Moreover, there have also been reports of black African civilians being rounded up and even slaughtered in rebel-controlled territories. (See, for instance, here and here.)

In the eyes of Gaddafi’s eastern Libyan opponents, there is evidently no greater insult than to associate Gaddafi either with Israel or sub-Saharan “black” Africa. The latter association has not only to do with the rumors about the African mercenaries. More fundamentally, it appears to reflect resentments concerning Gaddafi’s embrace of pan-Africanism. In some of the caricatures, Gaddafi is clearly depicted as himself being either a black African or a Jew.

Consider, for instance, the much-celebrated mural from Benghazi that is shown in the below AP photo. 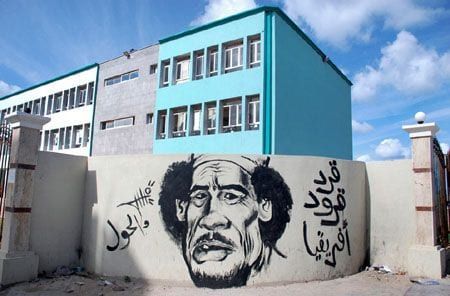 According to the accompanying AP caption, the Arabic writing is “a reference to Qaddafi’s self-declared title ‘The King of Kings of Africa.’” In fact, the title was bestowed upon Gaddafi by a meeting of traditional African rulers, which was hosted by the Libyan government in 2008. The meeting happens to have been held in Benghazi. As the AP caption notes further, the writing on the mural replaces the title “King of Kings of Africa” with that of “Monkey of Monkeys of Africa” — a phrase that manages at once to insult Gaddafi and all the African notables that attended.

(The fame of the mural, incidentally, is partly due to a recent New Yorker report, which claims that the artist was shot dead in late March immediately after completing his work. As the above photo demonstrates, however, the mural in fact already existed much earlier. The photo is dated February 23.)

Other caricatures from Benghazi depict Gaddafi outright as a monkey and show him wearing tropical fruits wrapped in his headdress, apparently to underscore his “African-ness.” To the left below is one example, which also adds a banana in his hand for good measure. 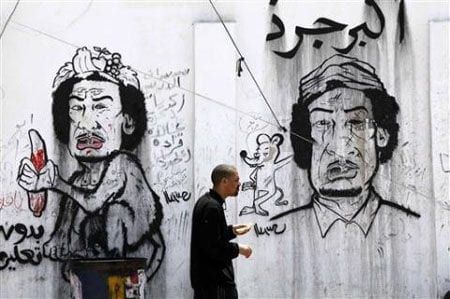 Here is another example. It comes from a lesser known collection, which was assembled by the Australian journalist Jason Koutsoukis and published on a blog. 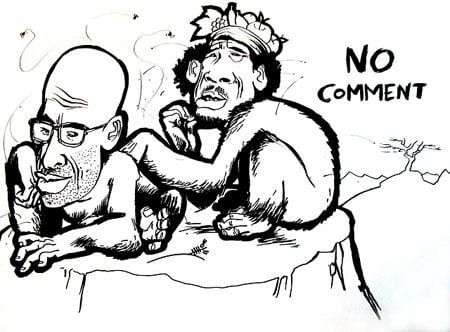 Several of the caricatures modify Gaddafi’s physical features in order to depict him as being a black African. This is arguably the case for the portrait in the famous “monkey of monkeys of Africa” mural. But it is clearly the case for the crudely racist portrayal below. 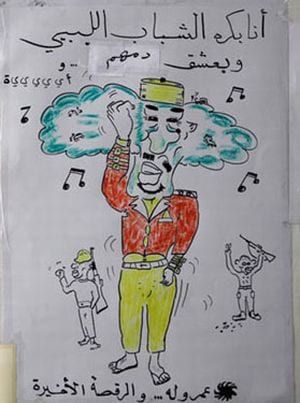 Note the exaggerated thick lips, mirroring the exaggerated thick lips of the smaller figure to the left, representing an African “mercenary.” Note too the transformation of Gaddafi’s frizzy hair: the source of the supposedly humorous description of him rendered as “Uncle Curly” in the Foreign Policy feature. But here, as in many of the other caricatures, “Uncle Curly” is in fact sporting a full-fledged “afro.” For good measure, the afro is infested with insects.

In the caricature in the bottom left of the below photo, Gaddafi has black skin. He also has fangs. 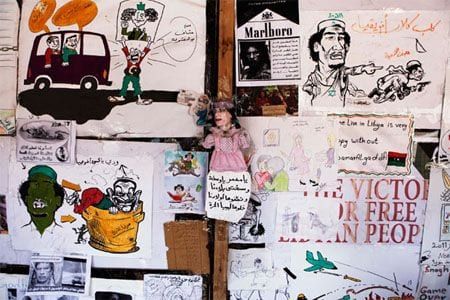 In a photo-montage just below it, he appears to be wearing side-curls in the style of an orthodox Jew. Here is a somewhat closer look. 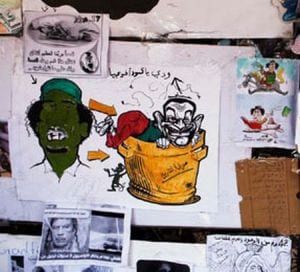 Note too the caricature in the upper-right hand corner. Jason Koutsoukis explains that it shows Gaddafi unleashing one of his alleged African mercenaries. Except that in the meanwhile someone has seen fit to add Stars of David on Gaddafi’s hat and robe. Here is a closer look. 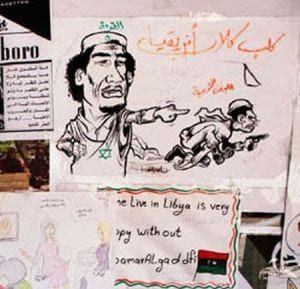 The caricaturing of Gaddafi appears to have been officially encouraged by the new authorities in Benghazi. Some of the earliest drawings on paper were reportedly posted around the so-called “media center” set-up by rebel officials for foreign journalists. (See here, for instance.)

One might have thought that with official sponsorship and the increasing attention of the international media, the expressions of anti-Semitism and/or “anti-Zionism” would have diminished. But precisely the opposite appears to have occurred. Stars of David abound in the caricatures of Gaddafi. They are so prevalent that I can here only provide a small selection to illustrate the point. 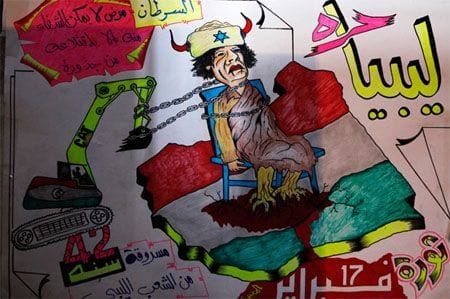 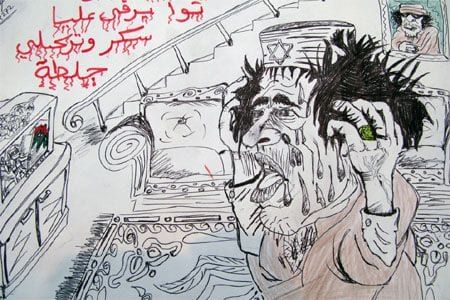 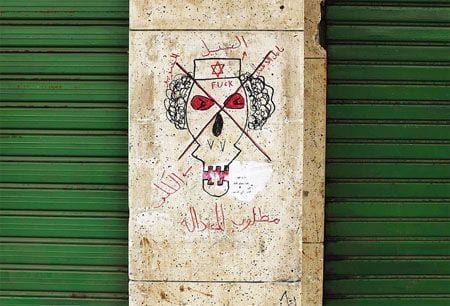 Here is an earlier mural, dating from the first week of the rebellion, but that has typically been shown in photos that render the Star of David difficult to see. 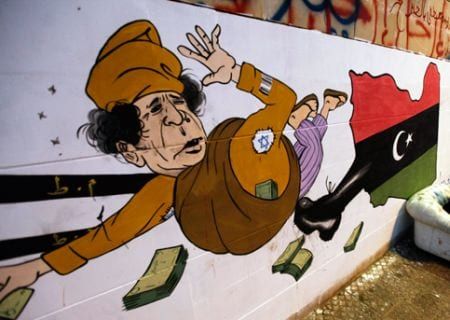 Note too the dollars: a less frequent but also regular motif in the caricatures.

The presence of the Stars of David in the caricatures has rarely provoked comment in the traditional media, let alone any effort at explanation. In the blog post containing his photos, Jason Koutsoukis notes, “There is a widely held perception in Libya that Gaddafi is the son of Jewish parents and is a secret ally of The State of Israel.” Despite the massive presence of Western journalists in Benghazi, few others appear willing to broach, much less investigate the subject.

Moreover, just as eastern Libyan cartoonists have resorted to racist stereotypes in caricaturing Gaddafi, so too have they employed anti-Semitic ones. Here is an example in which Gaddafi is depicted as an orthodox Jew. 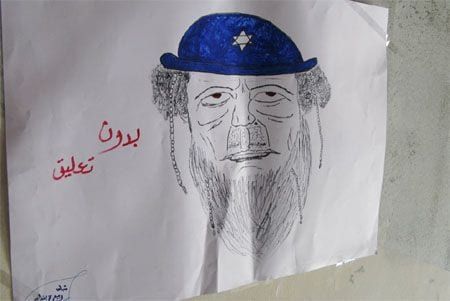 It is taken from the collection published by National Public Radio. According to the accompanying blurb, the NPR correspondent spotted the cartoons near “the old courthouse in Benghazi, now the Information Ministry, where journalists come for their press credentials.”

Sometimes the racist and anti-Semitic motifs are combined. This last picture, for instance, can be regarded as a sort of racist/anti-Semitic “tour de force.” It shows a vampire Gaddafi with a Star of David emblazoned on his robe accompanied by an African tribesman with horns. 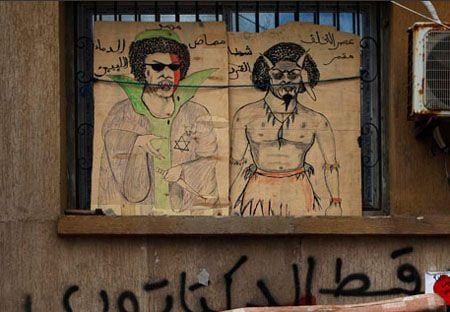 Note too that the tribesman and Gaddafi sport nearly identical afros, thus again underscoring the “African-ness” of Gaddafi in the eyes of his opponents.