Nothing, and Maybe Worse: A President's Nonsensical Gun Proposals

As far as I can tell, here is the totality of what President Obama proposed Wednesday to do about “assault weapons” and high-capacity magazines. (Actually, regarding those guns and magazines, he didn’t really propose to do anything; what he proposed for was Congress to do something — the same thing it did in 1994). In any event, here is the beginning, middle, and end of what he proposed:

Congress should restore a ban on military-style assault weapons, and a 10-round limit for magazines. (Applause.) The type of assault rifle used in Aurora, for example, when paired with high-capacity magazines, has one purpose — to pump out as many bullets as possible, as quickly as possible; to do as much damage, using bullets often designed to inflict maximum damage.

And that’s what allowed the gunman in Aurora to shoot 70 people — 70 people — killing 12 in a matter of minutes. Weapons designed for the theater of war have no place in a movie theater.

Here’s my recommendation: Congress should take the president literally, and do exactly what he says: nothing.

“Weapons designed for the theater of war” have the capability of firing automatically. Such weapons have been prohibited (except to collectors, who pay a very high license fee) since 1934. They are not available to the general public.

They have been used in no mass shootings, and no crime at all, for over 60 years.

Banning them again would ban no weapon currently in production or readily available anywhere. What weapons would the president’s “proposal” ban? Who knows? He certainly doesn’t. The 1994 law dealt with the fact that there really is no such thing as an “assault weapon” by naming a few specific weapons and by listing some required identifying features. For example: a pistol grip or a detachable magazine could qualify a gun as an “assault weapon.” But what would President Obama have Congress do about this rifle? 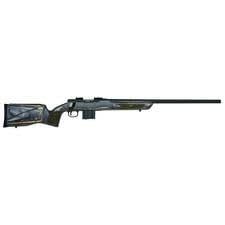 Note that this Mossberg MVP Varmint Rifle has a very distinctive pistol grip, and it also has a detachable box magazine. Many hunting rifles do, but this one is distinctive: it uses any magazines that will fit AR-15 rifles. It comes with a 10-rounder (of the same caliber, 5.56 NATO/ .223 Remington) that most AR-15s and other scary-looking “military style” weapons fire. Thus, it will accept the 20- and 30-rounders that Obama would like to prohibit.

Yet — since it is a bolt action and not a semi-automatic, this weapon would not be illegal under the terms of the 1994 law, even though it can be fired rapidly enough (as can pump action shotguns, also not banned in 1994) to do extensive damage quite quickly.

Would Obama have it be outlawed? Certainly, he doesn’t know.

The “one purpose” of the weapons used in Aurora (the movie theater in Colorado) and Sandy Hook, according to the president, is “to pump out as many bullets as possible, as quickly as possible.” This description does not distinguish those weapons from the millions of other semi-automatics (and high-capacity magazines) currently in the hands of law-abiding Americans.

The Washington Post reports that when the 1994 ban went into effect, “there were roughly 1.5 million assault weapons and more than 24 million high-capacity magazines in private hands” (and that was just “assault weapons” according to the limited definition of the 1994 ban — not all semi-automatics). There are many more now, and none of those weapons or magazines already produced were affected by the ban. Nor are the bullets those “assault weapons” fire — the .223 Remington — different in any way from those widely in use in all those other semi-automatic rifles.

The president’s reference to “bullets often designed to inflict maximum damage” presumably refers to hollow-points, bullets designed to expand on impact. But is the president seriously proposing to ban all hollow-point ammunition? If so, it is not accurate to say that his attempt to restrict “military style” weapons and limit the capacity of magazines would have no effect whatsoever on the likelihood or lethality of mass shootings. Indeed, banning hollow-points would almost certainly make future shootings — at least future shootings conducted with federally approved ammunition — much more lethal.

Solid bullets penetrate walls, doors, bodies, etc.; hollow points do not, or do so rarely.

In fact, limiting magazine size can also be predicted to cause more rather than fewer fatalities. As I argued here:

Indeed, a perfectly predictable but unintended consequence of banning high-capacity magazines would be to decrease the appeal of 9mm handguns and increase the popularity of more the powerful and lethal .40 and .45 caliber and .357 Magnum, since the main appeal of the 9mm has always been its higher-capacity magazines.

As with many “reforms,” the president’s proposals are sure to be ineffectual if implemented, and in some cases are far worse than doing nothing.