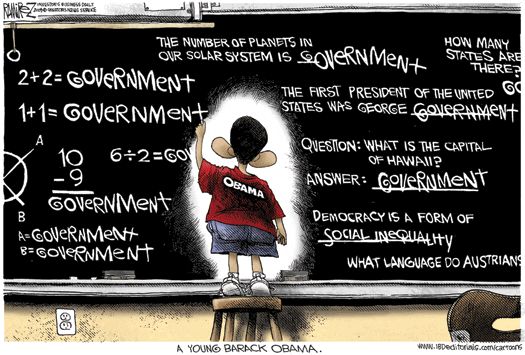 Observe President Obama’s remedies for the giant out-of-control plume of hemorrhaging political support that is casting a stain over his ambitions. His latest attempt to place a stopper over the gusher was announced by a liberal Newsweek writer, Howard Fineman, whose take on what White House operatives are saying about the looming midterm elections was that the goal would be “more about attacking Republicans than promoting [Obama’s] own vision.”

Fineman is an Obama fan — like many another political hack, he lapses into bedazzled schoolboy poetry when he thinks about all the president signifies, calling Obama’s presidential campaign “effervescent” (what, like Sprite?). There is a hopeful note to his column. Yet even Fineman seems a tad incredulous that “the strategy [Obama] and fellow Democrats will pursue in this fall’s election season” is all about “looking backward.”

Fineman and Obama’s thesis is that because a Republican was president in 2008 (while Democrats ran the House and the Senate), Republicans “caused” the financial crisis. The implication is that the meltdown could not possibly have been delayed until, say, 2009, nor could it have occurred during the hallowed Clinton years. No: it involved Wall Street, and everyone knows Wall Street is a Republican thing (though financiers have given massively to Obama), therefore the crisis was a result of bad Republican policies.

Never mind that the Wall Street bailouts Obama and the media credit with stopping the slide were bipartisan, or that Fannie Mae and Freddie Mac, which Republicans have attempted to reform, amount to an ongoing massive Democrat-enabled federal bailout every month. No, according to the increasingly arrogant Obama view, he did only the right things, with no Republican aid. “After they drove the car into the ditch, made it as difficult as possible for us to pull it back, now they want the keys back,” Obama said of the GOP while speaking at, naturally, a Wall Street fundraiser. “No! You can’t drive. We don’t want to have to go back into the ditch. We just got the car out.”

Switching metaphors, Obama said, “We got our mops and our brooms out here and were cleaning stuff out and they’re sitting there saying, ‘Hold the broom better, that’s not how you mop.’ Don’t tell me how to mop,” Obama said. “Pick up a mop! Do some work on behalf of the American people to solve some of these problems.”

A better metaphor might be that a pipe burst, there’s water all over the floor, and if Washington could leave the room it would dry out. Instead, there’s an army of bureaucrats tromping all over the floor, leaving big muddy footprints as they angle to splash more dirty water on the problem. The floor has gotten filthy, and the people have noticed. What they want is a healthy dose of government inaction.

At GM, the situation was a mess but people wanted the feds to stay out. An ordinary bankruptcy would have been the best possible solution. Instead, Obama intervened and actually gave a massive chunk of equity to the UAW, which had bankrupted it in the first place. Talk about handing over the keys to the guy who drove the car into the ditch. Even more salient is that unions are a special interest group — that Obama isn’t playing fair, but rather picking and choosing winners and losers based on their Democratic Party ties.

It was the same story with health care. Though the system was widely agreed to be a mess — there was water on the floor — Obama and his minions managed to make it even worse. Polls show a majority still opposed to ObamaCare. And the administration has long since stopped using the word “stimulus,” which even it realizes is perceived by the public to be an astonishingly opportunistic boondoggle consisting of handouts to pet interest groups. It won’t turn the economy around but will add to our debt and tax burden for decades to come.

Obama has only been a Washington politician for five years, most of which have been more about celebrity than governance, and he is proving to be a slow learner. He looks out at a tea party with one core message — less government — that has resounded from Massachusetts to Virginia to Florida to New Jersey to, even, California, where superliberal Sen. Barbara Boxer’s previously safe seat may be in jeopardy. Even though Obama was not asked to campaign for Sen. Arlen Specter as Specter fought for his political life in the blue state of Pennsylvania, the president continues to believe that his ideas are popular and that the small-government movement isn’t actually about small government. It must really be a front for conspiracy theorists or haters.

Obama’s fatal flaw is his impregnable certainty that because he believes the economy can and should be directed by the federal government, everyone else must believe this too. “Do some work on behalf of the American people,” he says, meaning hire more bureaucrats, spend the country into oblivion, and make more rules. That the average voter thinks that all of this interference with private industry is slowing, rather than speeding, our recovery from the recession doesn’t even occur to him.

John Boot is the pen name of a conservative writer operating under deep cover in the liberal media.
Read more by John Boot