Should NASA Send a Man to Mecca? 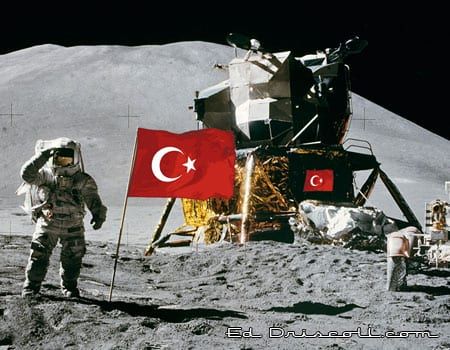 Nice words from Obama, but the historic bond between the U.S. and the state of Israel has been shaken to it core by the Obama administration’s new “even-handed” policy toward events in the Middle East.

The most recent insight into the mindset of the Obama presidency is comments made by NASA Administrator Charles Bolden.  Bolden was in the Middle East recently, one year after President Obama traveled to Cairo to address Muslim nations’ concerns about America’s policies toward Islamic interests.

But take a look at what Bolden revealed about what Obama told Bolden about his mission as the head of America’s space exploration agency:

When I became the NASA administrator, well before I became the NASA administrator, he charged me with three things. One was he wanted me to help re-inspire children to want to get into science and math; he wanted me to expand our international relationships; and third, and perhaps foremost, he wanted me to find a way to reach out to the Muslim world and engage much more with dominantly Muslim nations to help them feel good about their historic contributions to science and engineering.

Okay, it’s a good thing to encourage kids to seriously engage with the hard sciences, and there’s not much to quibble with regarding Obama’s charge to expand international relations with foreign space travel agencies.

But hold on. Obama now wants to make America’s space program a tool of his foreign policy aims?

Anyone who’s seen my Hicks File commentaries dealing with Obama’s presidency knows that I’ve been tough on him — but fairly so. I’ve not bashed him without due cause, and have occasionally complimented him when he’s done something I believe was the right thing to do — like assigning more troops to the Afghanistan war, something Stanley McChrystal, then the war’s commander, had made a case for.

But why is it NASA’s job or, by extension, America’s job to make Muslims feel good about themselves?

Even more troubling is the fact that Bolden made his revelations about the mission handed him by Obama while in the midst of an interview with … Al Jazeera. This is the international media network that prides itself on giving a voice to the Muslim world, including violent extremist groups like Hamas and Hezbollah.

It wouldn’t be a stretch to see Bolden’s comments as an indication of America’s new weakened position in the world.

In 1961, another Democrat, President John F. Kennedy, spoke eloquently about America’s space exploration. This president put space travel into context, seeing it as a part of the fight between “freedom and tyranny” in the world. But Kennedy made another observation.

He said: “Now is the time to take longer strides — time for a great new American enterprise — time for this nation to take a clearly leading role in space achievement, which in many ways may hold the key to our future on earth.”

Not only has Obama cut back the funding for NASA’s space exploration, he has now made it an arm of his politically correct policy aims toward the world’s Muslims.

Now, there will be those out there in the “birther” movement who will argue that this confirms Obama’s natural alignment with his fellow Muslims. As you know, they continue to claim that Obama is a “secret” Muslim and that the guy’s not even a legitimate American citizen!

It is, of course, abject BS — all anti-intellectual and conspiratorial “beam-me-up” nonsense.

Bolden’s Al Jazeera interview doesn’t prove Obama’s “really a Muslim,” but it gives additional evidence of a left-leaning ideology which causes him (like other leftists) to see Muslims — somehow — as victims of Western suppression. Obama believes that America must absolve itself of guilt by showing preference to Muslims … in a policy sense.

And most troubling, it’s part of a lager pattern in government, which places fuzzy-headed multicultural views above the nation’s interests.

When Nidal Malik Hasan shot 13 people dead and wounded 30 others at Fort Hood, the first response from General George Casey was to voice concern that a response to the shootings by a Muslim soldier would cause a loss of support for the Army’s diversity programs.

Whatever may have been the historic contributions of the Muslim world to science and math (something that is frankly debatable), the facts are this: in a contemporary sense, engineering, math, and science are in a dismal state in the Arab and Muslim world.

Levels of education are extremely low in most Muslim nations, and women and girls are locked out of almost any opportunity to compete fairly — in addition to being treated largely as chattel.

But as depressing as this is, even more distressing is what Obama has done to Charles Bolden, a proud former astronaut. Obama has tried to make a chump out of this space traveler, a man this president apparently sees only as his foreign policy tool in his attempt to “make nice” to the Muslim world.

Some mainstream media pundits have tried to compared Barack Obama with the nation’s great presidents. They’ve asserted that he’s on the same plane as Ronald Reagan or John Kennedy.

But this has to be a joke. Kennedy called on “every scientist, every engineer, every serviceman, every technician, every contractor, and every civil servant” to give a personal pledge to move the nation forward “with the full speed of freedom, in the exciting adventure of space.”

Unlike a man with the stature of John F. Kennedy, Barack Obama sees the nation’s space program as a tool of his foreign policy.

Is it just me, or is this another sign of bizarrely weak leadership in today’s White House and a disdain for the ethos of national greatness that presidents like Reagan and Kennedy believed in — and insisted on?

C’mon, please tell me it just isn’t me!

Joe R. Hicks is a political commentator and the vice president of Community Advocates.
Read more by Joe Hicks