Bob Woodward and Carl Bernstein were told by Deep Throat in Watergate, “Follow the money.” That’s good advice today as we unravel the burgeoning number of political scandals. There certainly is plenty of money to follow.

We can start with one of the star players in Big Labor, the Service Employees International Union (SEIU). The average voter probably never heard of the SEIU until the Blagojevich scandal. A top SEIU official, reported to be Tom Balanoff, was caught on tape wheeling and dealing with Blago on the Senate seat. The media has largely ignored this aspect of the story — or the hundreds of millions that the union has given to lawmakers.

Why should this matter, aside from a potential criminal problem for the official (who reportedly got a visit from the FBI)? Remember the advice: follow the money.

A pro-business group called Americans for Job Security laid it out in a handy ad with the header “Connect The Dots, Chicago Style” in the Washington Post: 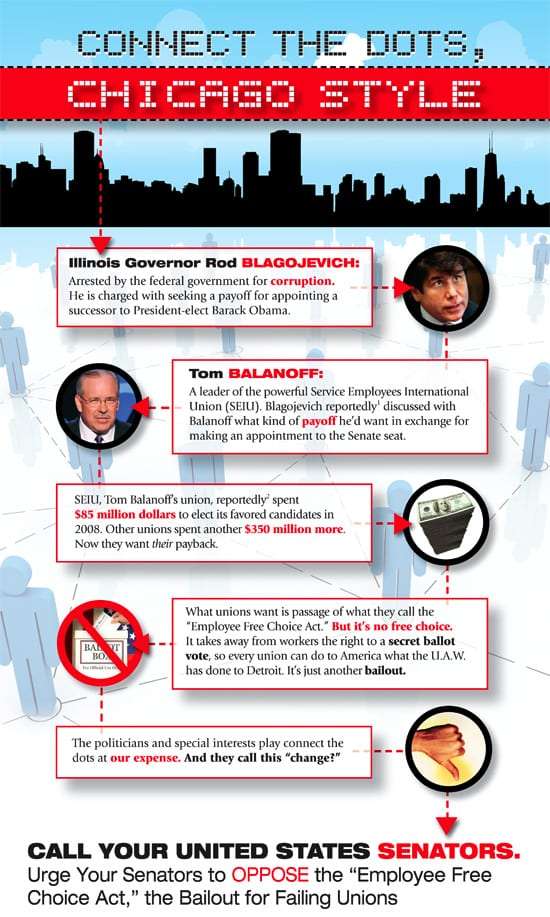 The investment of money from Big Labor to elect Democrats will likely bear fruit in the new administration as the Employee Free Choice Act and other legislation favored by labor makes its way to the top of the agenda. But will there be hearings on the SEIU’s role in Blago-gate or its equally disturbing role in a charity fraud scheme in California? Highly unlikely. The Democrats wouldn’t dare turn on their money men.

And then there is money from the other end of the economic spectrum — the financial institutions which disintegrated in the housing meltdown and resulting recession. Freddie Mac and Fannie Mae forked over more than $4 million between 1989 and 2002 to lawmakers, 57% to Democrats and many to those directly responsible for regulatory oversight. Then-Senator Barack Obama snared $126,349, Chris Dodd raked in $165,400, and Rahm Emanuel got $57,500. (Meanwhile no one in Congress saw fit to call a halt to the subprime mortgage feeding frenzy spurred by Freddie and Fannie.)

But that’s small stuff compared to what New York Senator Chuck Schumer was pulling in from a variety of big financial players whose firms were subject to oversight from the Senate Banking Committee on which he sat. The New York Times laid it out clearly: Schumer would soft-pedal regulation and they would give boatloads of cash to him and the Democratic Senate Campaign Committee which he chaired. The Times reported:

An exceptional fund raiser — a “jackhammer,” someone who knows him says, for whom ” ‘no’ is the first step to ‘yes,’ ” — Mr. Schumer led the Democratic Senatorial Campaign Committee for the last four years, raising a record $240 million while increasing donations from Wall Street by 50 percent. That money helped the Democrats gain power in Congress, elevated Mr. Schumer’s standing in his party, and increased the industry’s clout in the capital.

But in building support, he has embraced the industry’s free-market, deregulatory agenda more than almost any other Democrat in Congress, even backing some measures now blamed for contributing to the financial crisis.

Other lawmakers took the lead on efforts like deregulating the complicated financial instruments called derivatives, which are widely seen as catalysts to the crisis.

But Mr. Schumer, a member of the Banking and Finance Committees, repeatedly took other steps to protect industry players from government oversight and tougher rules, a review of his record shows. Over the years, he has also helped save financial institutions billions of dollars in higher taxes or fees.

He succeeded in limiting efforts to regulate credit-rating agencies, for example, sponsored legislation that cut fees paid by Wall Street firms to finance government oversight, pushed to allow banks to have lower capital reserves and called for the revision of regulations to make corporations’ balance sheets more transparent.

But that’s not the worst of it. Bernard Madoff, the high-wheeling investment guru who defrauded investors of more than $50 billion, was a major Schumer contributor. And Barney Frank also received a tidy sum from Madoff. As of this writing, neither has offered to return the money.

In response to a query as to the unseemly nature of Madoff’s donations to lawmakers tasked with oversight, Mary Boyle of Common Cause says, “Until we fundamentally change the way we pay for political campaigns and get wealthy special interests out of the business of paying for political campaigns at all levels of government, we’re going to have situations like this. In an ideal world it would be against the rules for elected officials to take contributions from industries they regulate. But it’s not, and it can’t be because it would be unconstitutional.” Her solution is “a system of campaign finance that relies on small donors and limited public funding and cuts the big donors and bundlers out of the picture.”

The Republicans have another idea: embarrassing and defeating the worst of the Democratic offenders. They’ve set up a new website: friendsofblago.com. If the “culture of corruption” brought down the Republicans in 2006, Republicans hope the same will be true in 2010 for Democrats. And they are encouraged by the upset victory of Joseph Cao over William Jefferson, the indicted incumbent who kept his cash in the freezer.

Now these are not all the money scandals bedeviling Democrats. There are House Ways and Means Chairman Charlie Rangel’s tax deficiencies. Then there is Sen. Chris Dodd, whose “Friend of Angelo” discounted loan from Countrywide Mortgage has spawned Senate and Justice Department probes. It seems that everywhere you look someone in Congress is getting something they shouldn’t or not paying for something they should. The average voter concludes that there is one set of rules and financial obligations for him, and quite another for those in power. (And right now the Democrats are mostly in power.)

It is a long way to 2010. But one thing is for certain: unless the Democrats police their own, the Republicans will have a big, juicy target to shoot at. And, if they follow the money, there’s no telling how successful they will be.