Why I'm Not Convinced Michael Slager Is a Cold-Blooded Killer 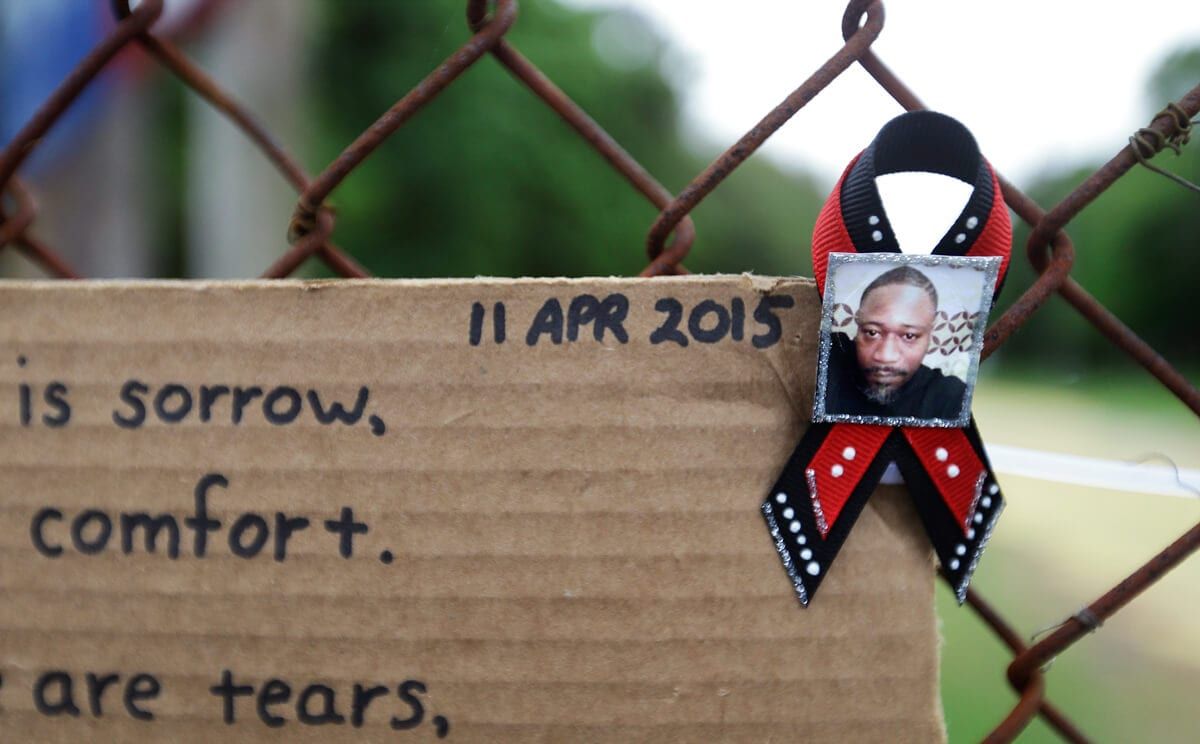 A ribbon with the image of Walter Scott is affixed to the fence with a message at the scene where Scott was fatally shot by a police officer after he fled a traffic stop, Sunday, April 12, 2015, in North Charleston, S.C. The officer, Michael Thomas Slager, has been fired and charged with murder. (AP Photo/David Goldman)

Regular readers of these columns know that I often use this space to explain and defend the actions of police officers who I feel have been unfairly vilified after being involved in some controversial incident.  In the case of Michael Slager, the now-former North Charleston police officer accused of murder in the shooting death of Walter Scott, I can offer no defense, for it is abundantly clear that in firing at a fleeing, unarmed man he broke the law.  So the question is not whether Slager was right or wrong, but rather how wrong he was.

I have been a cop for more than 30 years, the better part of that time working in some of Los Angeles’s most crime-ridden neighborhoods.  Though I’ve never fired my weapon at anyone, I’ve come within a split second of doing so on a number of occasions.  I’ve been shot at twice, both times mercifully without effect.  I’ve chased dozens of people down streets and alleys and over fences and from backyard to backyard, and I’ve been involved in altercations in which men tried to take my gun.  Unlike many people you have heard opine on the Walter Scott shooting, I have been in Michael Slager’s shoes.  He made a series of poor decisions, the most consequential of course being his decision to open fire on Scott, but I am not convinced he is a cold-blooded killer.

Consider: if Slager had been looking for an excuse to kill Scott (or anyone), if he had formed the malicious intent to shoot him in the back and then justify it by placing his Taser near the body, why did he wait until he had chased the man for more than the length of two football fields before doing so?

A more likely explanation for the shooting is that Slager was unprepared — mentally or physically — for an encounter with a resisting individual.  When that encounter came, he panicked and fired out of mistaken but not altogether unreasonable fear that he would be harmed if he did not.  And then he panicked further and compounded his mistake by handling and moving evidence that might have bolstered whatever slim claim to justification he might have had.

Before getting to the shooting itself, let’s examine the circumstances that preceded it and how Slager might have avoided the tragic outcome.  As the dash-cam from Slager’s police car shows, the incident began with a traffic stop for the most minor of offenses: a defective brake light, in this case the one mounted in the car’s rear window.  The video clearly shows the light isn’t working, so this is not a case of a police officer manufacturing a reason for a stop.  If the violation seems trivial to you, keep in mind that stops for minor offenses can and often do uncover far more serious lawbreaking.

But in watching the video we can see that as Slager speaks with Scott, there is no indication that he has any suspicions about him, even as Scott gives varying accounts as to who owns the car he is driving.  Scott at first says he has just bought it, then later says he is preparing to do so.  In any event, he does not produce the registration and insurance papers he is required by law to possess. Slager makes no issue of this, but he takes Scott’s driver’s license back to his car, presumably to verify via the car’s computer that the license is valid and to check Scott for outstanding warrants.

And Scott did have a warrant for the relatively minor offense of failing to pay child support; he was more than $18,000 behind on his payments on the day he was killed.  But we don’t know if Slager had discovered the warrant at the time Scott broke from his car and ran down the street.  When someone flees from a routine stop, an officer is presented with a series of choices, choices that are complicated when the officer is working alone as Slager was.  Assume that Slager had discovered the outstanding warrant.  I submit it was an unwise choice to give chase as he did, especially with a passenger still in Scott’s car who had been neither identified nor searched.  Had that passenger been armed and so inclined, he could have shot Slager in the back as the officer ran past.  And given the minor nature of the charge on the warrant, and the fact that Slager had Scott’s driver’s license, wouldn’t it have been preferable to let Scott get away for the time being and pick him up later?  It certainly would have been preferable to what actually occurred.

But if Slager was determined to pursue, why didn’t he stay in his car and drive after Scott for as long as possible, thus saving his wind for the altercation that almost always occurs at the end of a foot pursuit?  Slager could have driven into the lot where the shooting occurred, headed Scott off, and been better able to wrestle with a man who had run the same distance.  And by leaving his car in the parking lot, presumably with the keys in it and running, Slager ran the risk that someone would steal it (yes, it happens).

And even if Slager was right to pursue Scott on foot, it would have been wiser to keep him in sight but at a distance while waiting for backup to arrive.  As can be heard from the siren in the opening moments of the shooting video, help was near.  Why not wait those few seconds it might take for help to arrive and improve your chance of success?  Indeed, an officer arrived at the scene just moments after Slager shot Scott, and he came from a direction that would have allowed him to intercept Scott had he continued running as he was.

Had Slager chosen any of these options, today Walter Scott would be alive and Slager himself would be every bit as unknown to the world as he was at the moment he found himself on Remount Road and behind a 1990 Mercedes with a broken brake light.

But now to the shooting itself.

I’m in no way suggesting that witness Feidin Santana planned it this way when he shot the video, but the video is timed precisely to show that portion of the incident most damning to Slager.  As the video opens we can hear the sound of a siren and that of a Taser being activated.  We hear a voice, presumably Slager’s, saying something inaudible, followed by “I’ll shoot you.”  When Slager and Scott come into view, at about 0:17 into the video, the two are an arm’s length apart, with Scott appearing to turn away and Slager reaching for his holstered pistol.  The Taser wires, which connect the device to two darts fired from it, can be seen extending between Scott and Slager, and the Taser itself can be seen landing on the ground five to six feet behind Slager.  Feidin Santana has said that Scott did not grab the Taser, but if he didn’t, how else to explain how it ended up on the ground behind Slager?

I suspect that Slager’s defense will be to claim that Scott did indeed grab the Taser, a claim not entirely unreasonable given where the device landed before the shooting.  And I suspect he moved the Taser in a panicked attempt to bring the evidence into conformance with his mistaken perception of what had occurred.  If a suspect gains control of an officer’s Taser and is preparing to use it against him, deadly force can be justified in defense.  But once the threat has ended, so too must the use of deadly force.  I think when Slager drew his weapon, he truly believed Scott still had the Taser.  He had made the decision to fire, and he was unable to process the change in circumstances that made the use of deadly force unreasonable and therefore unlawful.

And this is where Slager all but shredded his only potential defense.  If he had left the crime scene undisturbed, if he had allowed the evidence to speak for itself, any presence of Scott’s DNA on the Taser could only be explained by his having grabbed it as Slager claimed.  As things now stand, if Scott’s DNA is found on the Taser, prosecutors can argue it was transferred by Slager’s handling of it after handcuffing Scott.  In acting as he did, Slager not only destroyed his own credibility, he tainted the very forensic evidence that might have supported his already weak claim of self-defense.

Whatever Slager’s crimes, there is still a moral distinction to be made between a cop who errs, even as catastrophically as he did, and someone who kills in the course of a robbery or a gang feud or some other act of depravity.  When the process has run its course, he will have earned the punishment the law prescribes for him.  He has tarnished the police profession and made our job more difficult, but I cannot bring myself to hate him.

It took less than three seconds for Michael Slager to fire those eight rounds at Walter Scott’s back.  In so short a time, one life was ended, another was forever ruined.  And now the sad story is a cautionary tale for police officers everywhere.  Slager learned this too late, but sometimes a cop has to stop and think, and sometimes he has to watch a guy run away.