The White Rose: An Anniversary of Three Executions

Today marks an anniversary of true bravery for the cause of liberty. On February 22, 1943, Sophie Scholl, her brother Hans, and Christoph Probst were executed by guillotine in Munich, Germany. Their crimes? Anonymously distributing leaflets criticizing the German government at the University of Munich. They were members of the White Rose, an underground student group that should inspire every American who loves the cause of liberty. 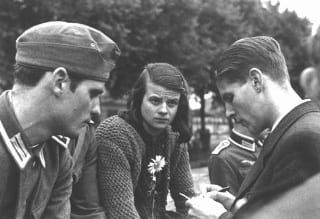 The White Rose was comprised of a dozen or so University of Munich students, including Probst and the Scholls. They were active when very few participated in opposition to the Nazi regime. After German defeats at Stalingrad, many Germans silently feared for the future of Germany, but scant few ever put their lives on the line through deeds.

It is no coincidence those who were willing to actively oppose the Nazis were motivated by devout religious views. Like the martyrs of early Christendom and the American civil rights movement, those who have nothing to fear in this world are well suited to oppose evil and injustice.

The religious origins of Dietrich Bonhoeffer’s active opposition to the Nazis are well-known and inescapable. But even Colonel Claus von Stauffenberg, the man who planted a bomb that almost killed Hitler, was a devout Catholic. He was active in a religious and philosophical dissident group called the Kreisau Circle. He struggled with the questions and contradictions of taking a life to oppose black hot evil. Of course Hollywood devotes exactly zero screen minutes to the religious motivations of von Stauffenberg.

Active opposition to Hitler inside Germany was a deadly and lonely affair. Yet today, we view these few souls, most of whom would meet gruesome deaths, as plainly right and heroic. Pope Benedict XVI captured this idea of justice revealed over time when he observed: “usually it is the creative minorities that determine the future” — another lesson for today’s defenders of liberty.

Between March 1942 and February 1943, the White Rose wrote and secretly produced anti-Nazi leaflets. They copied them on mimeograph machines and literally left them lying all around Munich. They stenciled anti-Hilter messages on the sides of buildings. The Gestapo went wild. Nobody else in Germany was doing anything of the sort.

White Rose leaflet four captures the totalitarian corruption of language as well as a view of Hitler justified by hindsight:

Every word that proceeds from Hitler’s mouth is a lie. When he says peace, he means war. And when he names the name of the Almighty in a most blasphemous manner, he means the almighty evil one, that fallen angel, Satan. His mouth is the stinking maw of hell and his might is fundamentally reprobate. To be sure, one must wage the battle against National Socialism using rational means. But whoever still does not believe in the actual existence of demonic powers has not comprehended by far the metaphysical background of this war.

In March 2001, Justice Clarence Thomas spoke at James Madison University. He said he was fascinated by the history of German resistors. Thomas’ concurrence in the McDonald gun rights case most certainly was informed by a deep appreciation of what recourse free men have when mayhem, evil, and oppression rule. Thomas’ tour de force describes the plight of recently freed slaves reliant on guns to protect their new freedoms. He recalled the Massacre of 1876:

There, a white citizen militia sought out and murdered a troop of black militiamen for no other reason than that they had dared to conduct a celebratory Fourth of July parade through their mostly black town.

The lessons of the White Rose are not confined to Nazi Germany. We are not many generations removed in this nation from oppression, and in other places, a single generation. Our Constitution was designed first to prevent oppression, but also to resist it.

The fourth White Rose leaflet spoke of a need for a continuous watch, because we will never reach the End of History:

Everywhere and at all times, the demons have waited in darkness for the hour in which mankind is weak; in which he voluntarily abandons the position in the world order that is based on freedom and comes from God; in which he yields to the force of the Evil One, disengaging himself from the powers of a higher order.

Implicit in this assessment is that the world cannot escape a struggle between moral polarities in foreign affairs.

Today’s anniversary offers a multitude of other lessons. For starters, the power of language, truth, and courage are potent weapons to defend liberty. The central recognition of human dignity drew them to the active opposition to Hitler. The power of anonymous political speech also cannot be overlooked. In civilization’s darkest hours, anonymous political speech serves as a check on tyranny as our own founders presumed the right to bear arms also does.

So today, one might consider three young lives cut short in Stadelheim Prison in Munich and the courage they had to attack one of the most evil regimes of the 20th century. The courage to act and risk everything is a prerequisite for liberty to flourish. Remembering that they were not endowed with any particular human trait we don’t ourselves possess makes their sacrifice all the more extraordinary.