State of the Second Amendment

It’s clear from President Obama’s State of the Union address that gun control is a major goal for his second term.

Senators—senators of both parties are working together on tough new laws to prevent anyone from buying guns for resale to criminals. Police chiefs are asking our help to get weapons of war and massive ammunition magazines off our streets, because these police chiefs, they’re tired of seeing their guys and gals being outgunned.

If you want to vote no, that’s your choice. But these proposals deserve a vote, because in the two months since Newtown, more than a thousand birthdays, graduations, anniversaries have been stolen from our lives by a bullet from a gun. More than a thousand.

Obama benefits from the confusion created by media and anti-rights politicians who intentionally mislabel modern semi-automatic sporting rifles. “Weapons of war” were severely limited by the 1934 National Firearms Act, which required a stamp tax and registration for all military firearms purchases by private citizens. In 1986, the Hughes Amendment to the Firearm Owners Protection Act (FOPA) limited civilians purchasing automatic firearms — true assault rifles used by military — to what existed in civilian inventory at the time FOPA took effect. As a result, sub-machine guns over 25 years old, like the Heckler & Koch MP5, regularly sell for $20,000 or more. Murderers aren’t likely to spend $20,000 and then wait for ATF approval of their purchase.

Obama’s “more than a thousand” claim is confusing. Was he implying there were 1,000 firearms-related deaths in the last two months? Gun banners like the Violence Policy Center claim “more than 30,000 Americans die in gun suicides, homicides, and unintentional shootings.” According to the FBI, a monthly average of 715 firearms murders occurred in 2011, or 1,430 over two months. If Obama based his claim on government data not yet publicly available, this means America is experiencing a historic drop in firearms-related fatalities.

The 1968 Gun Control Act was supposed to reduce crime by — among other things — limiting interstate firearms and ammunition commerce to federally licensed dealers, limiting handgun sales to adults age 21 or older, and restricting long gun sales to ages 18 and older. However, the graph below shows that murder rates continued rising after 1968, and peaking in 1980. After enactment of FOPA, murder rates again increased to a second peak in 1991. When the first Brady Bill took effect in 1994 — background check and 5-day waiting period on handgun sales — murder was already declining.

The Clinton gun ban also took effect in 1994, making it “unlawful to manufacture, transfer and possess semiautomatic assault weapons [or] large capacity ammunition feeding devices [holding over 10 ammunition cartridges].” In 1998, the Brady law replaced waiting periods with the National Instant Check System for all firearms purchase through licensed dealers. Murder rates leveled off between 1999 and 2007, dipping 3% in 2004, the year the Clinton ban sunset, before rising 3% again in 2005. Then between 2007 and 2011, murder rates declined another 16%. 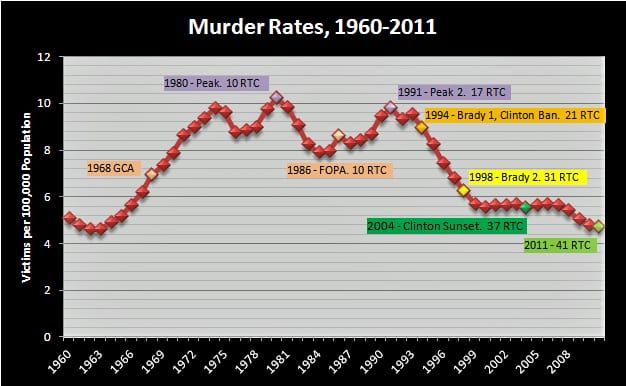 Overall violent crime rates generally mirrored murder trends, beginning their decline after 1991, two years before enactment of the Brady and Clinton laws (see graph below). Violent crime continued declining through 2004, when the Clinton ban sunset, then increased 2% by 2006. Two years doesn’t signify a reliable trend, especially considering the crime rate was higher in 2003 than in 2006, and considering that violent crime declined 18% between 2006 and 2011.* 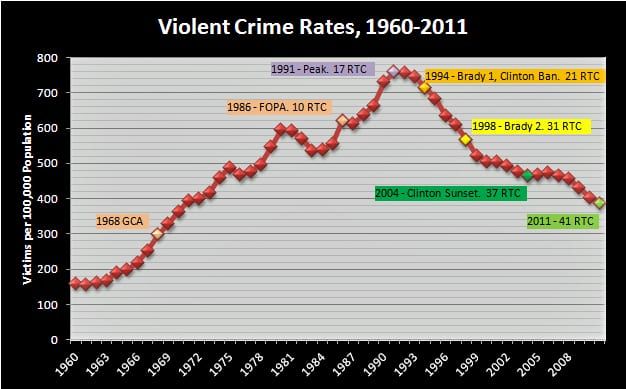 Obama said: “I know this is not the first time this country has debated how to reduce gun violence, but this time is different.”

But where’s the epidemic “gun violence” problem that gun control is supposed to address? What’s “different” this time? Violent crime rates are lower than they’ve been since 1970; the murder rate is the lowest since 1963. Yet gun ownership is at an all-time high.

Many experts agree that the Brady Bill and Clinton gun ban had no impact on crime. For example, Philip J. Cook, “regarded as the nation’s foremost authority on gun control” by the University of Virginia School of Law, concluded that the Brady Bill “had no statistically discernible  effect on reducing gun deaths.” Both the Centers for Disease Control and National Academy of Science concluded that results were too inconsistent to clearly endorse the Brady Bill as a crime-fighting tool. The National Academy of Science also found the Clinton gun ban to be ineffective in reducing crime. The National Gang Crime Research Center found: “Gang members were significantly more likely to report it has been easier since the Brady Bill went into effect to acquire illegal guns.”

The above two graphs also note the number of right-to-carry (RTC) states, where liberalized laws enable law-abiding citizens to carry concealed handguns in public. Prior to enacting these laws, many of these states had outright carry bans.

The U.S. Government Accountability Office estimated that by the end of 2011, there were “at least 8 million active permits to carry concealed handguns in the United States.” The graph below shows that since 2001, RTC states’ violent crime rates were 30% lower, on average, than states which restrict citizens’ right to carry. 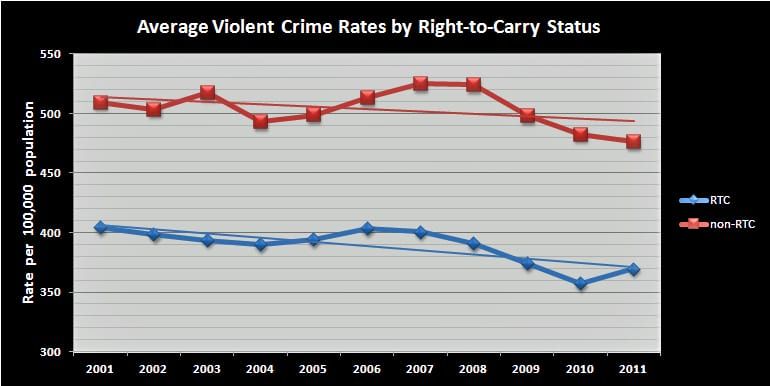 One mantra repeated by Obama during his speech was that crime victims “deserve a vote” on his gun control proposals:

The families of Newtown deserve a vote.…

The families of Aurora deserve a vote….

The families of Oak Creek, and Tucson, and Blacksburg, and the countless other communities ripped open by gun violence, they deserve a simple vote.

According to President Obama’s criteria, the eight million people who invest their time and money — and take material and emotional risks to help make their communities safer — deserve a vote, too.

Women are the fastest growing demographic of gun owners. CBS reported: “More women than ever are picking up rifles, shotguns, and handguns. And target shooting is one of the fastest-growing female sports.” After Newtown, another news outlet reported:

Nearly three-fourths (73 percent) of respondents in the National Sporting Goods Association’s annual survey of firearms retailers reported an increase in female customers in 2011 over the previous year.

States like Texas and Oklahoma report that women account for an increasing percent of new concealed handgun licenses.These women often are the only line of defense between their children and violent attackers: The Supreme Court decision of Castle Rock v. Gonzales confirms that police have no duty to protect their children; even a restraining order doesn’t create an “entitlement” to police protection.

President Obama, these women deserve a vote, too.

Speaking in Minneapolis on his gun control proposals, President Obama stated: “But if there’s even one thing we can do, if there’s just one life we can save, we’ve got an obligation to try.”

The graph below shows that since 2001, RTC states’ murder rates were 38% lower, on average, than carry-restricted states. Perhaps the president should follow his own advice and eliminate the federal laws restricting concealed handgun carry by law-abiding citizens. 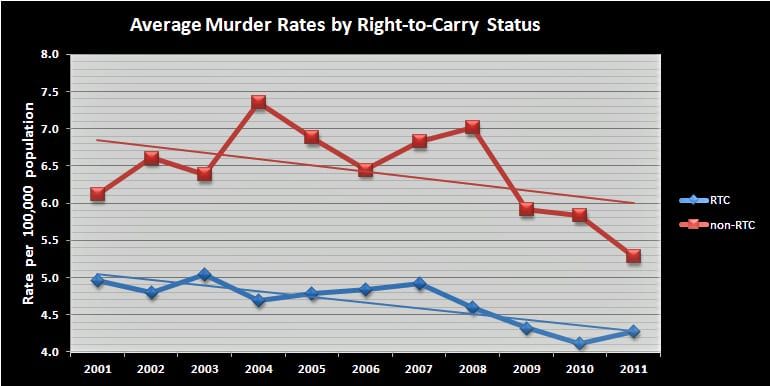 In recent weeks, many lives were saved by defensive gun use. Here’s two examples:

When a madman murders people, gun banners want to restrict law-abiding citizens’ right of self-defense, claiming one life saved justifies infringing everybody’s freedom. But when lives are saved using a firearm, we hear nothing.

Mr. President, why the double standard?