After the Newtown, Connecticut mass murder, anti-rights politicians and media shifted into high gear. The only “solution” for such a tragedy was another gun ban; within two days, Senator Dianne Feinstein introduced her version. Pundits like the Washington Post’s Ezra Klein politicized the tragedy by claiming that America is an unusually violent place, with the only answer being more gun control.

There’s a problem with all of their hyperbole: it is based upon myth and manipulated data.

I personally believed in civilian disarmament until an acquaintance in law enforcement challenged my gun-banner’s assumptions with questions and points I could not rebut. This began a research journey limited only by my decision to exclude any data cited by the NRA. At the time, I was convinced only caring people like the Brady Campaign would present the truth.

Surprisingly (to me, at the time), I found no dataset proving civilian disarmament made anybody safer.

In response to Ezra Klein’s report titled “Twelve facts about guns and mass shootings in the United States,” below are eight fictions about gun control.

Do note: all data cited below are from sources supportive of gun control.

The FBI defines mass murder as “a number of murders (four or more) occurring during the same incident, with no distinctive time period between the murders.”

Newtown certainly qualifies. But the Clackamas mall shooting does not, because an armed citizen’s brandishing was enough to drive the shooter to a stairwell, where he committed suicide after killing two victims. Mother Jones did not wish to count this incident. Yet in “Armed Resistance to Crime,” the authors found that over 75% of the time, the armed defenders never fired their guns — yet their defense was successful.

Ron Borsch, manager of the SEALE Academy and longtime police trainer and member of the Bedford, Ohio Police Department, has been compiling mass murder data for over a decade. He has found that the most likely outcome in a mass murder situation where the murderer is confronted with armed resistance is the murderer committing suicide.

What if an armed defender had been present at Sandy Hook Elementary School?

Assuming Senator Feinstein gets her way, future mass murders would inevitably lead to calls for further restrictions. The goal of gun control is civilian disarmament.

The Brady Campaign to Prevent Gun Violence claims it “fights for sensible gun laws to protect you, your family and your community.” Since 2001, they’ve published annual report cards rating each state on how many gun-control laws they have. States graded “A” enacted most of Brady’s “sensible” laws; states graded “F” enacted the fewest.

The Centers for Disease Control and Prevention (CDC) did state-level surveys in 2001 and 2002, estimating the percent of households with a gun (Percent Gun Ownership, or PGO). Collating this with Brady grades shows that more gun control correlates perfectly with less guns (see table below). It’s reasonable to extrapolate that incrementally enacting more “sensible” gun laws does in fact result in civilian disarmament:

One of the unpleasant realizations from my original research was my learning that the history of American gun control is that of racist oppression: banning sales to Indians in order to maintain dominance while grabbing land; ensuring free blacks remained as close to slaves as possible; disarming the Japanese before their internment during World War II.

Two days after Sandy Hook, Slate reported on how the Australian government enacted “sweeping gun-control measures” just twelve days after a mass murderer killed 35 tourists in Port Arthur, Tasmania. Then CNN reported on how the UK enacted a gun ban following the school massacre of 15 children in Dunblane, Scotland. If there is a formula for successful gun bans, twenty dead children in Newtown presented a key factor.

The advertised benefit of gun control: fewer guns means less violence. This is false — including in the Australia and UK examples.

Before their bans, both countries had lower violent crime and murder rates than the United States. Ten years later, all U.S. violent crime categories have decreased, yet they have been increasing in the UK and Australia. The biggest tragedy: by 2007, UK women were raped twice as often as American women, who were able to partake of their civil right of self-defense. Australian women were raped three times as often.

In 2008, the Guardian reported that guns were “easily and cheaply available on the streets of the UK’s big cities.”

This mirrors U.S. research: “Gang members were significantly more likely to report it has been easier since the Brady Bill went into effect to acquire illegal guns.”

Shocking statistics released last night show a 14 percent increase in murder and manslaughter in England and Wales between 1998 and 2007.

There was also a 28 percent increase in deaths from bladed weapons. Those killed by shootings increased by the same figure.

Most shockingly, there was a 57 percent increase in deaths caused by punching and kicking.

Slate misleadingly claimed that Australia hadn’t had a “similar massacre” since banning guns in 1997. This is false: their deadliest mass murder occurred in 2009, when 135 died after arsonists set brush fires. Prime Minister Kevin Rudd said: “There’s no words to describe it, other than it’s mass murder.”

Here’s the most revealing aspect of the failed attempts to reduce violence by restricting law-abiding citizens: after 10 years of failure, neither country said: “Those bans didn’t help. Violent crime is worse, so let’s restore the civil right of self-defense.” The obvious implication: gun bans are not about enacting the most effective policies for reducing crime, but about civilian disarmament for its own sake.

Our crime data corroborate the British and Australian experience. Collating Brady grades with FBI violent crime rates shows similar correlations at the state level, though not quite as strongly as with black and white homicides:

However — between 2000 and 2011, RTC states were consistently less violent, even though Brady considered them worse every year (see graph below): 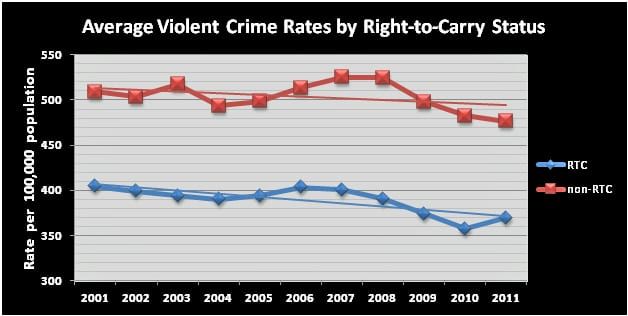 Klein cites one researcher who claims: “We are in fact currently experiencing a waning culture of guns and violence in the United States.” Klein relied on surveys to make his point. But surveys run risks of underreporting gun ownership. More curiously, Klein cited Gallup, which reported in 2011: “Self-Reported Gun Ownership in U.S. Is Highest Since 1993.”

Klein would have us believe that a shrinking group of old white men are adding to their burgeoning arsenals, but media reports corroborate Gallup. CBS reported:

More women than ever are picking up rifles, shotguns, and handguns. And target shooting is one of the fastest-growing female sports.

After Newtown, one news outlet reported:

Nearly three-fourths (73 percent) of respondents in the National Sporting Goods Association’s annual survey of firearms retailers reported an increase in female customers in 2011 over the previous year.

The Boston Globe reported growth in Massachusetts firearms permits despite the state’s “antigun reputation,” as “more people … seek personal protection” because of concerns over the economy, terrorism, and “intense news focus on horrific crimes.” 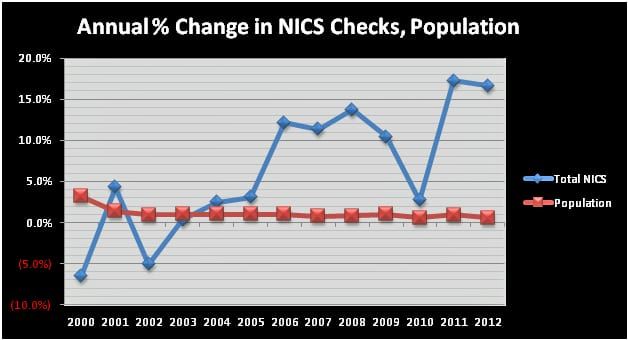 (The FBI notes: “a one-to-one correlation cannot be made between a firearm background check and a firearm sale.” For example, a small percentage are denied, and one check may represent multiple purchases.)

Even without December, 2012 has already exceeded previous years: 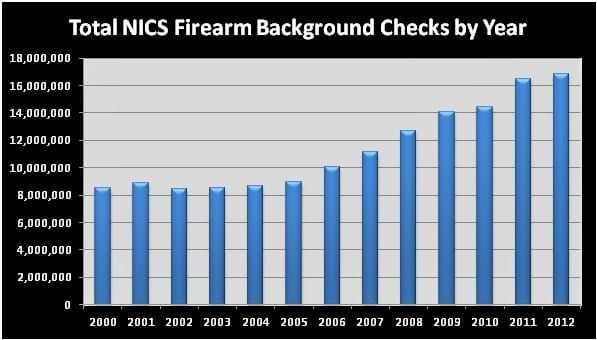 ATF data show that since 2005, civilian firearms inventory grew from an annual average of 4.8 million to 7.2 million. Meanwhile, with a growing number of Americans purchasing an increasing number of guns, violent crime declined (see graph below): 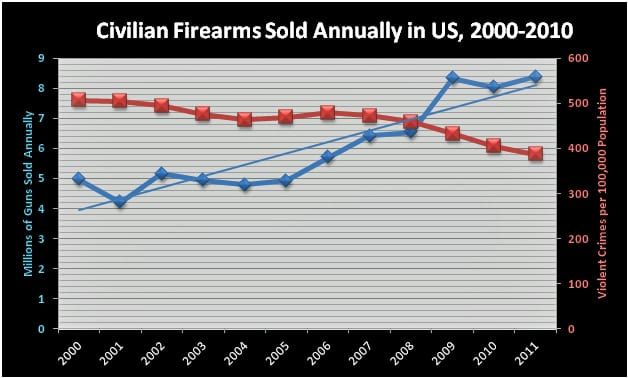 Fiction 6: The U.S. Is One of the Most Violent Countries

Klein cited data from the United Nations Organisation for Economic Co-operation and Development (OECD), carefully selecting only those countries that made the U.S. appear relatively more violent.

But the latest OECD crime data show the U.S. ranks 7th lowest in robbery out of 26 countries:

The U.S. ranks 8th lowest out of 25 countries when people were asked if they felt unsafe on the street after dark: 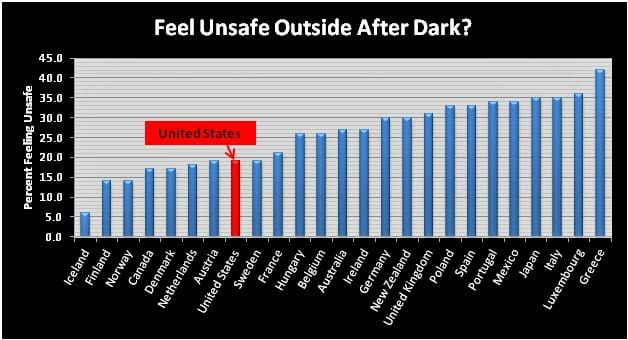 In 2011, the United Nations published homicide data for 189 member countries, all of them OEDC members. The U.S. only had the 92nd highest homicide rate, placing it in the 52nd percentile: 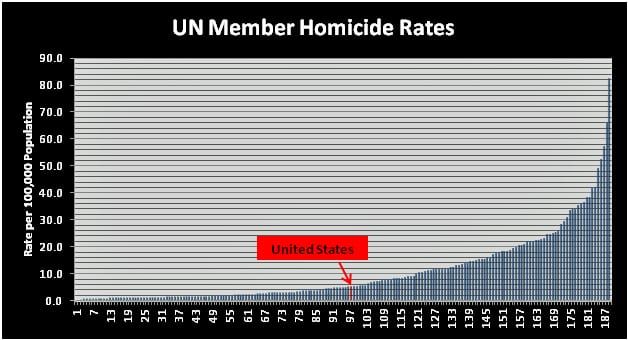 The Small Arms Survey (SAS) is an “independent research project” located in Geneva, Switzerland, providing information on “all aspects of small arms and armed violence,” and partnering with international gun-ban organizations including the UN. In 2007, SAS published estimated civilian firearms inventories for 172 UN member countries. The U.S. clearly has the most gun ownership: 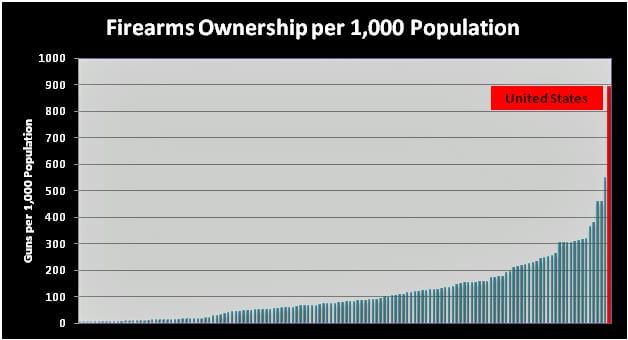 The U.S. remains in the 52nd percentile among the SAS countries (see graph below). 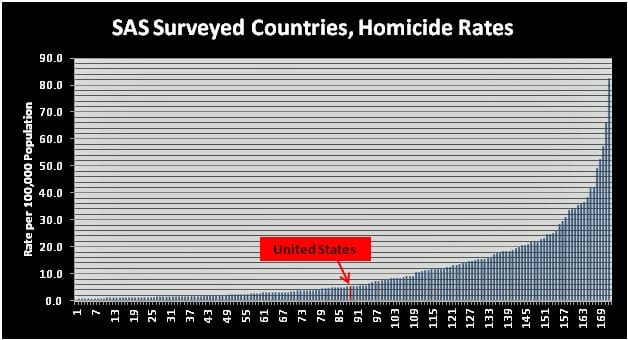 For purposes of statistical analysis, we must be wary of how “child” is defined in order to identify relevant crime data.

Oxford English Dictionary (OED) defines the word “childhood” as: “The time from birth to puberty.” OED defines “puberty” as: “The period during which adolescents reach sexual maturity and become capable of reproduction, distinguished by the appearance of secondary sexual characteristics.” There seems to be general agreement that puberty completes by age 15, so children are ages 0-14.*

The FBI gives domestic violence its own category. One FBI study showed that while overall violent crime rates were declining, domestic violence rates increased. Perhaps nothing creates a destructive explosion like feelings of betrayal mixed with passions like lust, attachment, and anger. Violently powerful emotions may explain why 54% of all child mass murder victims occur during domestic violence.

Children are more likely to be killed by a stranger during non-domestic mass murders, as happened in Newtown, Connecticut. Ron Borsch notes: “The number one copycat target of the active killer is schools (38%, includes pre-school and K-12).” With the exception of 2004 and 2006, these incidents occur 7 to 8 times annually in the U.S., with an average of 2.5 child victims per incident**: 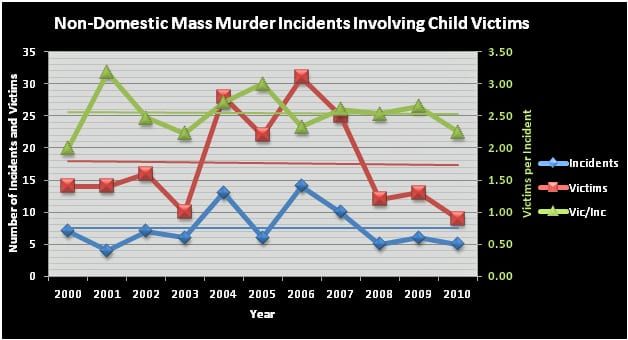 The civilian firearms inventory grew about 72 million since 2000 — but non-domestic child mass murder rates did not increase: 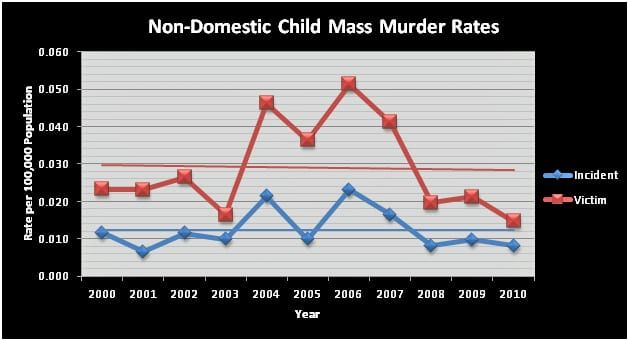 In the years 2003-2006, carry-restricted states were safer from non-domestic child mass murders. However, after 40 states attained RTC status in 2007, RTC states averaged a lower rate, while non-RTC states saw their rate increase: 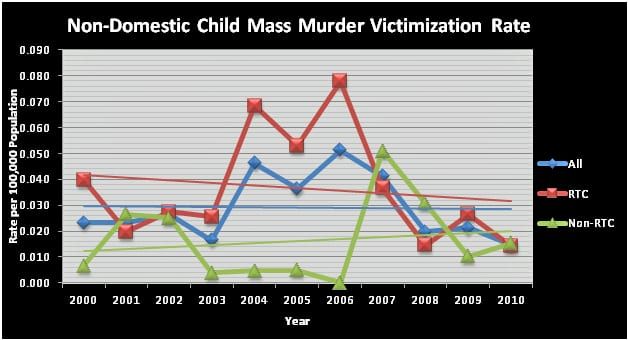 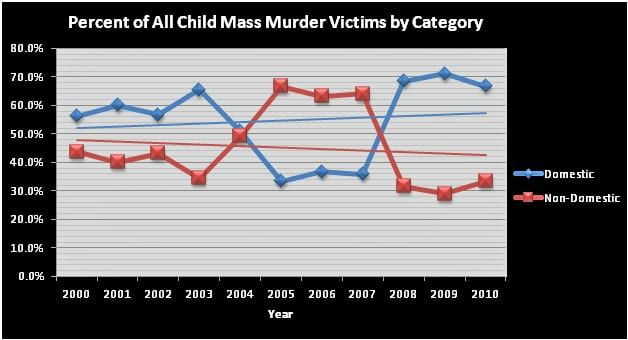 Do gun banners want a serious discussion about making children safer? President Obama’s daughters attend a school with armed security, so having responsible, trained adults on-site is a reasonable consideration.

Based on the crime data presented in this article — again, all the data come from countries and organizations supporting the most extreme forms of gun control — the gun-ban movement promotes a fatally flawed agenda whose outcome includes:

If civilian disarmament is a righteous, caring agenda, why must gun-control advocates manipulate their own data to manufacture “proof” of its validity?

And what kind of empathetic people exploit the occasion of murdered children and a distraught public as the proper time to ask for support of their agenda?