Recall: the Brady Campaign to Prevent Gun Violence endorsed Barack Obama as president, and celebrated the 2008 elections as a victory for gun control:

In February 2009, Obama’s Attorney General Eric Holder announced the administration wanted to make “a few gun-related changes” including a ban on “assault weapons.”

This year began with great promise for the Brady Campaign. After Gabrielle Giffords was shot, Brady President Paul Helmke announced:

[W]e can and should do more … to address the easy access to high-powered guns that make it too easy for dangerous and irresponsible people to disrupt and destroy the lives of innocent Americans.

Implying the Brady campaign was pleased by the Giffords shooting is of course incorrect, but after the fact, gun-control proponents have exploited shootings of public officials for their cause. For example, the Brady Campaign is named after Jim Brady, President Reagan’s press secretary who was shot during an assassination attempt. The Brady Campaign had reason to hope history would repeat itself — but Congress didn’t respond.

Instead, Brady leaders had to rely on Obama’s promise during a private meeting that he was working on gun control “under the radar.” Not long after, the Fast and Furious scandal blew up in the administration’s face.

Nevertheless, last June, Brady Vice President Dennis Henigan misrepresented ATF data by declaring that 70% of all Mexican cartel guns came from U.S. gun stores. He did not mention that that most came from ATF, FBI, and DEA smuggling, U.S. State Department sales to Central American countries, and the black market.

While Congress deposed him regarding Fast and Furious, Holder accused congressional investigators of revenge and racism. Yet Brady’s own data prove this statement an example of Brady’s hypocrisy and lack of credibility. States with the most gun control have the lowest levels of gun ownership. They also experience the highest black homicide and lowest Caucasian homicide rates.

In 2007, Brady began publishing an annual scorecard grading states’ gun control laws on a 100 point scale, then assigning “stars” to states: four stars was Brady’s best (most gun control), no stars their worst, with the assumption that Brady’s “best” states were the safest. State grades were then collated with the latest available (2008) homicide data from the Centers for Disease Control. The graph below shows that while Brady’s “best” states were safest for Caucasians, they were the deadliest for blacks (the black homicide rate scale is on the left, the Caucasian scale is on the right): 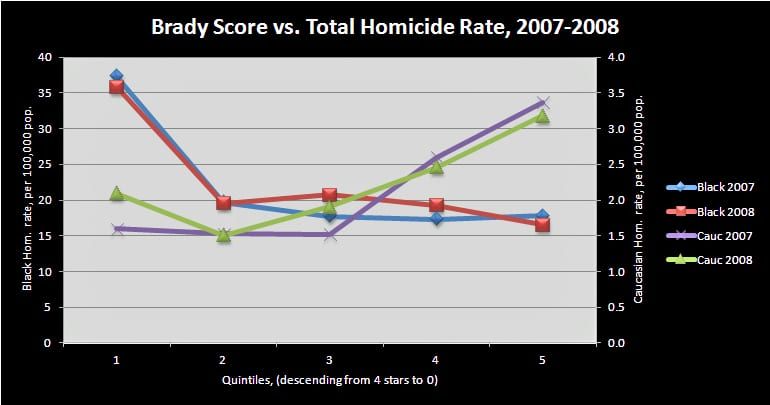 This is important, because American gun control is rooted in racism — it was originally designed to protect white European immigrants from Native Americans. After the Revolution, gun control protected white Americans from black slaves and freemen, and then helped our government imprison Japanese Americans in World War II.

Worse for Brady, their “safest” states had the highest black firearms homicide rates, but the lowest Caucasian rates: 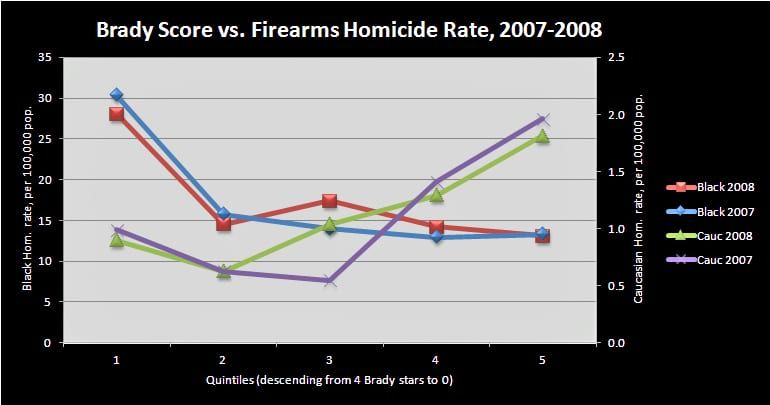 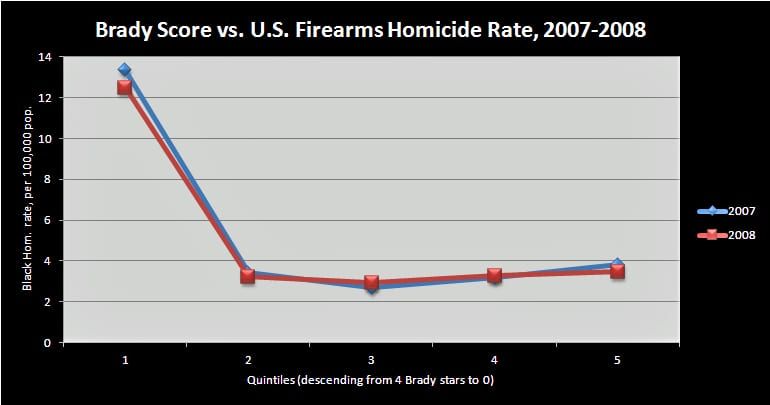 More bad news for Brady: Collating their scorecards with FBI violent crime shows that right-to-carry (RTC) states — where law-abiding citizens have broader rights to carry a concealed handgun — are becoming safer over time, compared to Brady’s “safest” states, which don’t give citizens such rights. (The graph below displays states’ average violent crime rates by RTC status, with the percentage difference in green.) As of 2010, RTC states were 35.0% safer than non-RTC states, and had a 41.9% lower murder rate, too: 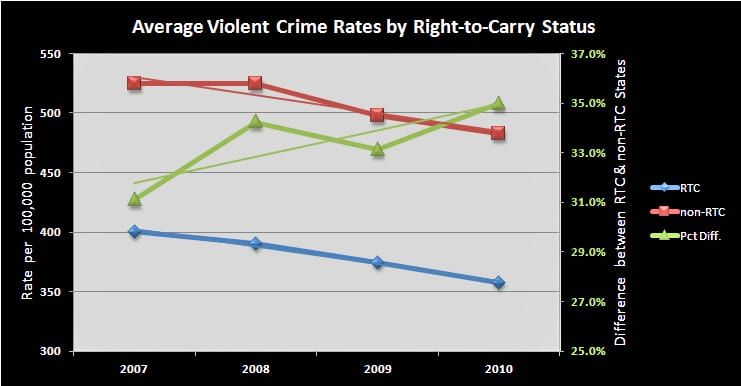 Brady gave RTC states an average scorecard value of 9.0 in 2010, while non-RTC states averaged 51.3. According to Brady, non-RTC states are safer because they enforce more gun control laws such as firearm registration, waiting periods of up to 10 days before you can pick up the gun you already bought, and bans on magazines containing over 10 rounds of ammunition. In Brady’s imaginary world, the above violent crime values would be reversed.

Savvy analysts will rightfully note the above correlations aren’t necessarily significant, and that’s the point: Brady claims that guns cause violence, yet they are unable to cite one comprehensive, significant dataset to corroborate their claims. Instead, they select factoids to support their propaganda, all rendered invalid upon examining the entire source data.

Brady began listing membership income as a separate line item in 2009. Mailing list company Consumerbase sells a Brady list currently containing 123,562 names, and reports that the average donation is $40. Collating these numbers with Brady’s tax return indicates they have about 32,000 members, plus 68,000 other contributors. (These numbers include the Million Mom March, which is now part of the Brady Campaign.)

Meanwhile, the Second Amendment continued experiencing a gradual recovery across America, as can be seen in the following examples:

Besides the advantage of being armed, which the Americans possess over the people of almost every other nation, the existence of subordinate governments, to which the people are attached, and by which the militia officers are appointed, forms a barrier against the enterprises of ambition, more insurmountable than any which a simple government of any form can admit of.

For 2012, the most important criteria in determining a candidate’s legitimacy: how comfortable is the candidate with the concept of armed citizens?