Public Sector Unions: Not as Advertised

Recently, union members launched protests because legislatures around America have begun to address budget deficits by eliminating perks long considered sacrosanct by public employees. While it’s reasonable to expect unions to represent their members’ self-interest, their actions beg the question: are they?

In Congress, lawmakers introduced a bill “that would freeze hiring government wide except at the Defense, Homeland Security and Veterans Affairs departments,” in order to cut the federal budget. Federal employee unions responded by “pushing back hard against the GOP-proposed cuts”

In Indiana, “thousands” protested as a bill advanced that would end the requirement that all employees pay union dues.

These protestors are what Open Secrets calls “public sector unions,” which “represent workers at every level of government — federal, state and local.” But they have a hidden agenda that’s bad for America.

Some public employee unions support gun control. Former American Federation of Teachers (AFT) president Sandra Feldman believes that many school shooting incidents were committed by boys who “grew up in a culture where adults have a positive attitude toward guns, and the access to guns of all kinds is nearly unfettered.” She believed the solution was to:

Pass state and federal gun control laws that do a better job of restricting children’s access to guns. Mandatory child safety locks on all guns would be a good start. So would stricter laws for licensing and monitoring those who sell guns.*

Thank you Senator Kennedy, Representative McCarthy, and Mrs. Brady [of Brady Campaign to Prevent Gun Violence]. The [NEA] commends the sponsors and is proud to offer the support of its 2.4 million members for key provisions of the Children’s Gun Violence Prevention Act.*

Public sector unions benefit from growth of government jobs and power, as this in turn strengthens their political clout. For example, Phil Glover, legislative coordinator for the American Federation of Government Employees (AFGE), testified before Congress that an “explosion in the federal prison inmate population is the direct result of Congress approving stricter anti-drug enforcement laws involving mandatory minimum sentences in the 1980s.…”

Glover used this “explosion” to justify asking Congress to “recognize the need for additional BOP [U.S. Bureau of Prisons] staffing.” He then claimed private prisons were not a cost-effective alternative, compared to government union-run institutions.

Since justifiable homicides occur “during the commission of a felony,” armed citizens reduce the need for prison space — and additional staff — by eliminating criminals who may spend many years behind bars.

Likewise, gun control often turns law-abiding citizens into criminals. For example, the Legal Community Against Violence believes: “Laws that require firearm owners to report lost of stolen firearms serve several public safety functions.” But in Connecticut, if a repeat theft victim doesn’t report stolen guns within 72 hours, he faces a class D felony after the second “offense,” and up to five years imprisonment.

Research shows that many organizations not traditionally classified as part of the gun control lobby spend heavily on anti-rights politicians.

Considering the union rhetoric above, it seems reasonable to determine if there’s a correlation between public sector union contributions and anti-rights voting in Congress. The graph below shows a strong negative correlation indicating that as the NRA grade value falls from A (GPA=4) to F (GPA=0), public sector unions comprise a greater portion of the candidate’s campaign funding. (Spearman’s correlation value is -0.90.) 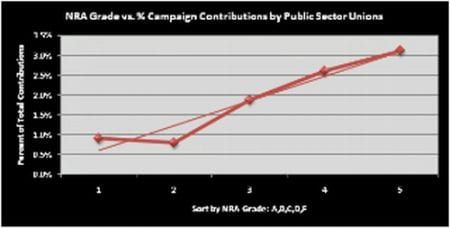 Since nearly all public sector union campaign contributions went to Democrats, it could be argued that this is a coincidental correlation, since most anti-rights politicians are Democrats. For example, the 135 NRA F-graded House members are all Democrats, and 104 of the 106 Brady-endorsed members are Democrats.** 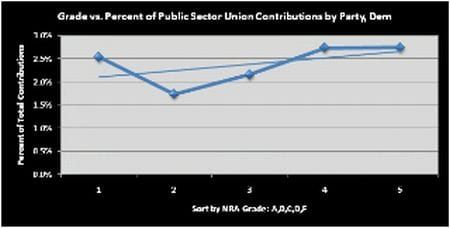 In any case, trial lawyers, public sector unions, and Democrats all favor gun control. Those promoting the anti-rights agenda appear to consistently associate to achieve their agendas.

It’s been alleged that the National Rifle Association has undue influence on Congress because of its political spending. For example, the Washington Post believes the NRA’s money is why the ATF has trouble imposing gun control regulation that will supposedly “help stem the smuggling of high-powered AK-47s and AR-15s” to Mexico:

Such is the power of the NRA. With annual revenue of about $250 million, the group has for four decades been the strongest force shaping the nation’s gun laws.

Apparently, this criteria of “money equals undue influence” only applies to the NRA. Table 1 shows that since 1990, public sector unions contributed $208.8M to federal candidates – giving 86.5% ($180.6M) to Democratic candidates – versus the NRA’s $18.2M.

† Campaign contributions include both individual and PAC money.

According to Washington Post criteria, public sector unions have about 3.6 times more undue political influence than the NRA. If it’s wrong for the NRA, how can it be right for public sector employees to use our money – our taxes pay their salaries, benefits, and union contributions – to influence legislation?

The NRA is a private, member-supported organization. Public sector unions are often mandatory-membership organizations: employees must join to work. Union members in Indiana and Wisconsin have been protesting against proposed legislation that would eliminate the “mandatory union dues teachers and other public workers are required to pay.”

“There’s a perception that was not present in 1995 that public employees are almost a privileged class,” said Richard Vedder, an economics professor with Ohio University who studies the labor movement.

A Clarus poll found that 64% of voters believe “government employees should not be represented by unions.”

Curiously, teachers apparently have time to stage protests in many states, but not to teach. Regarding the Wisconsin legislation:

The National Education Association, which represents 3.2 million workers, said teachers’ collective bargaining rights are also being targeted by proposals in Ohio, Idaho, Indiana and other states.

The U.S. Department of Education reported that in 2009 68% of 4th graders and 69% of 8th graders couldn’t read proficiently.

People lacking reading skills are unable to comprehend founding documents such as The Federalist Papers, rendering them incapable of appreciating the principles of American liberty or valuing what they’ve lost when another freedom is regulated into oblivion.