I like to blog in all sorts of places, and I like to travel light. I’m also a bit cheap. That makes 2008 a good year for me, as it’s the year of tiny, cheap laptops.

The trend kicked off with the tiny, Linux-based Asus Eee PC.

I got one and liked it, but it’s a bit on the small side — a 7″ screen is about the smallest screen that’s really useful, but it’s still rather little. And the 7″ Asus looked like it had room for a bigger screen in the same case. Then there’s the sleek, pretty HP Mini-Note.

I liked it, too, but it was a bit underpowered and pricey. It cost nearly twice the 7″ Asus’s $399 price, and — at least bogged down with Windows Vista, as my machine was — it was pretty slow. It’s attractive, but what I really wanted, I thought, was something lighter that would run XP.

So when Asus came out with a 9″ version sporting XP

I was more than willing to give it a try. And I think that for a lot of people it just might hit the sweet spot in performance, price, and usability. As they say, nine inches is better than seven. 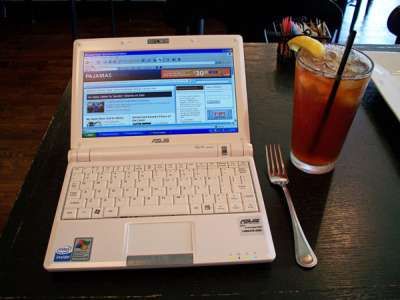 In most ways, it’s just a 7″ Eee PC with a bigger screen and Windows. It sports a built-in 1.3 megapixel webcam, and a wide array of ports (3 USB, Ethernet, microphone/headphone, and CRT), plus an SD card-reader. The screen is the only thing that’s bigger — setting the 9″ Asus atop the 7″ Asus, they appear to be exactly the same size. Alas, that includes the smallish keyboard, which is usable, even to a guy like me with big hands, but a bit cramped. (The keyboard on the HP Mini-Note, on the other hand, is superb, really the best feature of that machine and about the best small laptop keyboard I’ve encountered anywhere.) The 9″ screen is crisp, bright, and clear. I think I like it better than the HP’s screen, which has gotten rave reviews. Wifi, managed by Windows, is much better than the wifi management on the 7″ Linux Asus, which requires you to log on each and every time.

Battery life is good — 3+ hours of surfing, blogging, and so on — and the 9″ computer, like the 7″ Asus, is small enough to fit in the outside zipper pocket on my backpack. (Asus includes a small slip-on laptop sleeve, too, which is kind of a nice touch on a budget-priced machine.) The fan sound, though not loud, is at an annoying pitch.

The computer comes refreshingly free of crapware, with only a few preinstalled programs — there’s Microsoft Works, and a fully-functional version of StarSuite (Sun’s commercial version of OpenOffice), as well as a PowerPoint viewer and DVD-playing software, though you’d need an external optical drive for DVDs as the Asus, like most subnotebooks, lacks an optical drive.

I wouldn’t want to write a novel on this machine, but the tiny keyboard is perfectly usable — I’m writing this review on it now — and it has a go-anywhere charm that, coupled with its relatively low price, means you’d bring it with you when you might be inclined to leave a fancier laptop behind. Is this the machine for peripatetic bloggers? At the moment, I think it’s probably the best combination of features and low price out there. But the race for cheap subnotebooks is still ongoing, which means that things may get even better soon. What I’d really like is something with the price of the Asus, the keyboard of the HP, and Windows XP for speed and broad software compatibility. And in fact, HP is planning to bring out an XP version of the Mini-Note, while other companies are working hard to join the cheap subnotebook wave. It’s a great time to be, well, me.

Glenn Reynolds is the Beauchamp Brogan Distinguished Professor of Law at the University of Tennessee, and blogs at Instapundit.