In early November, the Albany County legislature voted 24-12 to forbid the use of styrofoam containers by county businesses with more than 15 locations nationally and at least one locally. Yesterday, it was signed into law.

This bill thus allows the continued usage of styrofoam by the majority of Albany businesses, but responds to an apparent wave of Albany County citizen displeasure with the menace of local corporations with at least 14 locations nationally and at least one locally that maybe sell soup. Bastards.

Below, freedom fighter County Executive Dan McCoy signs the bill into law on the county’s Bingo/prom punch folding table as two middle-aged Albany men — both of them likely victims of, and vocal advocates against, styrofoam products manufactured by corporations with at least 15 locations nationally and at least one locally that maybe sell soup — look on: 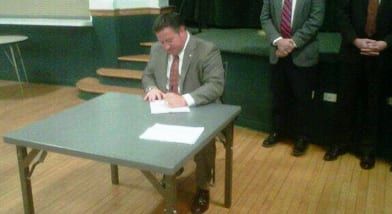 How does McCoy feel about all this? (Note: the bar for “groundbreaking” has been lowered):

The effort to go green in one upstate New York county got a big boost today as groundbreaking legislation that will change the way many fast food chains distribute their products was signed.

Proclaiming the occasion “a great day for Albany County,” County Executive Dan McCoy signed a Styrofoam ban into law at Bethlehem Town Hall. The ban passed the County Legislature in early November in a 24-12 vote and only applies to businesses with at least 15 locations nationally. But McCoy says the new law doesn’t go far enough. “We’re gonna do everything in our power to reduce, re-use and recycle.”

Of course, New York State will suffer an immediate economic hit. In addition to the extra burden placed on these handpicked private sector businesses, New York has a large styrofoam manufacturer in Canandaigua which will suffer if New York City adopts a similar ban, as is expected:

If New York City bans food-service packaging made of polystyrene — commonly called by the trade name Styrofoam — Pactiv Corp. would take a big hit. The Illinois-based manufacturer whose Canandaigua plant employs more than 800 people supplies a bulk of the foam packaging sold in New York City.

“Estimated total annual sales combined for all foam manufacturers of polystyrene foam containers such as clamshells, cups, plates and bowls in New York City are currently $97.1 million, of which Pactiv has a large share of that business,” said Pactiv’s business manager for sustainability, Mark Spencer, in an email from Pactiv headquarters in Lake Forest, Ill. “This would be a direct loss in sales and would cost New York City businesses, consumers and agencies at least an additional $91.3 million per year because they would be forced to switch to higher-cost alternatives.”

Environmental advocates have long warned that Styrofoam containers will take 500 years to biodegrade.

Yes. But is there an accompanying problem associated with that fact — i.e., has any human or animal been harmed, or are any likely to be harmed by the product?

I have a call into Dan McCoy about that.