The Road to Freedom: How to Win the Fight for Free Enterprise

The Road to Freedom: How to Win the Fight for Free Enterprise

“Life isn’t fair,” we patiently explain to our children, unschooled in the ways of the world. By the same token, conservatives try to explain to liberals that they can’t make life fair with other people’s money.

“Fairness” is the new mantra of President Obama to justify his economic policies and attack those of his opponents.  His critics mock that’s all he’s got because his redistributive policies have failed so miserably.

But in The Road to Freedom: How to Win the Fight for Free Enterprise, a timely and important new book, Dr. Arthur C. Brooks, president of the American Enterprise Institute, says defenders of a free economy can — and should — win the fight for free enterprise on the basis of “fairness,” too.

Brooks forcefully contends that Americans aren’t satisfied with the materialistic argument that free enterprise is more effective at creating jobs, which obviously has failed to “stem the tide of big government.”

Privately, free enterprise’s champions talk about these things incessantly. While they generally believe in the need for a safety net, they celebrate capitalism because they believe that succeeding by merit, doing something meaningful, seeing the poor rise by their hard work and virtue, and having control over life are essential to happiness and fulfillment. But in public debate, they often fall back on capitalism’s superiority to other systems just in terms of productivity and economic efficiency. What moves them is the story of their immigrant grandparents who came to America to be free; but what they talk about is the most efficacious way to achieve a balanced budget.

However, polls show Americans still instinctively react favorably to the concept of the freedom of opportunity. In fact, this has been ingrained in the American spirit since its founding, when the “pursuit of Happiness” was enshrined in the Declaration of Independence along with “Life” and “Liberty.”

While some libertarians and economic writers have lamented that an early draft included the word “property,” rather than what they regard as the more amorphous and emotional term of “happiness,” Brooks argues that the choice was inspired: 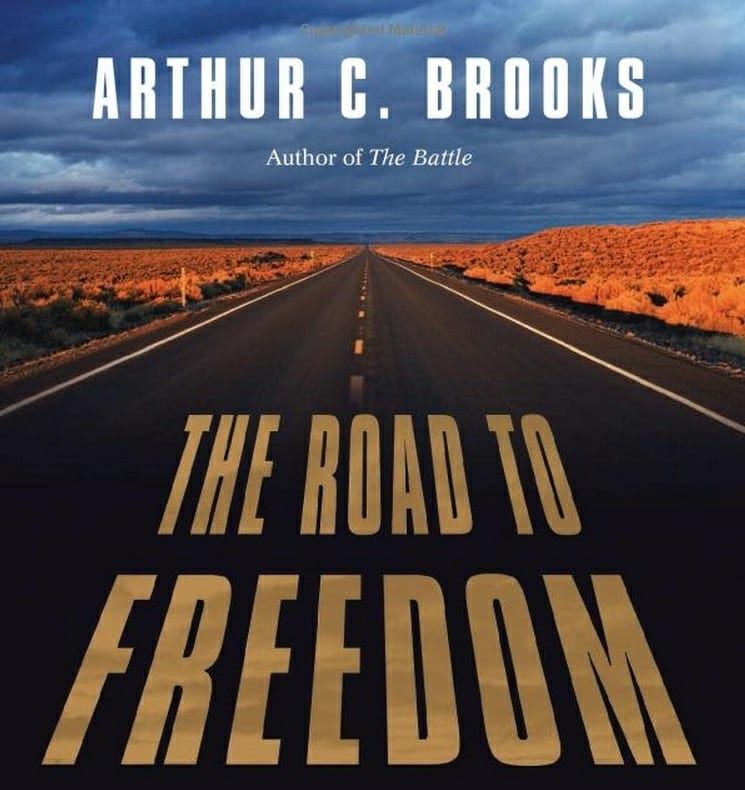 Of course, Brooks notes, the Founders did not promise happiness, only the right to its pursuit. And few things are as satisfying as earned success. Mere possession does not equal that, whether it’s via lottery winnings, inherited wealth, or a government check.

Brooks points out that Ronald Reagan framed his defense of free enterprise in both moral and practical arguments. More recently, the case for welfare reform was presented primarily as a moral imperative, not as a budget-saving measure.

But perhaps the most startling challenge Brooks makes to the would-be defenders of liberty is that they stop sneering at the idea of “fairness.”  Even economist Milton Friedman — whose monumental Free to Choose combined the moral, American spirit element of free enterprise along with the practical arguments to make its case — famously dismissed that notion, stating, “’Fairness’ like ‘needs’ is in the eye of the beholder.’”

But Brooks considers this to be a colossal mistake.  Fairness, he says, is a “central fact of life and hugely important to everybody.”

In fact, there is nothing fairer than the merit-based system of free enterprise; the problem is its opponents really have no idea just how fair it is. They don’t want fairness — they want equality, even if it’s by force.

When I work harder or longer hours in the free enterprise system, I am generally paid more than if I work less in the same job. Investments in my education translate into market rewards.  Clever ideas usually garner more rewards than bad ones, as judged not by a politburo, but rather by large groups of citizens in the marketplace.  True fairness makes free enterprise not just an economic alternative. It makes it a moral imperative.

Two bits of evidence that this argument works with Americans still on their way up the economic ladder (and they view themselves as being on that journey) come from George McGovern famously being booed after promising low-income workers he would raise estate taxes and give them the money. To this day — even after the “death tax” has been lowered to the point that it doesn’t even affect all of the mythical “1%” —  the vast majority of Americans hate the levy as being unfair to tax someone for dying.

Of course, like all authors who deal with economics, Brooks can’t resist proving his thesis by bringing in materialistic arguments. The most important of which is the point that, while helping the poor most often is the posited reason to restrict and tax free enterprise, capitalism has lifted the poor to levels unimagined 200 years ago. Despite politically correct history texts and the criticisms of Charles Dickens, the poor were the primary beneficiaries of the industrial revolution.

Books like this are generally compared to works by such popular gurus of economics as Friedman and Henry Hazlitt, and because of the book’s title, Friedrich Hayek’s Road to Serfdom likely will come to mind for many.

But I would put this brief more in a class with the late, great James Q. Wilson, who — no matter what social phenomenon he examined, from the law to the nature of bureaucracy to marriage — always did so in the light of the “Moral Sense.”

It’s hard to imagine a timelier book, but I predict The Road to Freedom will stand the test and be a reference point for defenders of liberty for a long, long time.