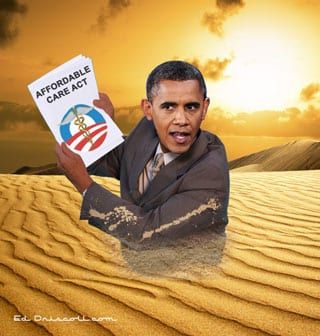 The supporters of the ironically titled “Affordable Care Act” are attempting to downplay their latest legal defeats by pretending that they are disappointing but inconsequential stumbles in the law’s long march toward the pantheon of nanny state entitlements. These people are whistling past the graveyard. In fact, the president’s “signature domestic achievement” is moribund. It is a congressional crack baby afflicted with multiple organ failures caused by the Democrat addiction to corrupt bargains and unconstitutional edicts.

Yesterday’s appeals court ruling against the Obama administration unequivocally confirms that reality. The plain text of the “reform” law says that federal tax credits and subsidies can only be issued via state-created insurance exchanges. Yet the IRS promulgated an imperial edict indicating that it would also grant them through federally created exchanges. This is what the U.S. Court of Appeals for the District of Columbia Circuit struck down: “[T]he ACA unambiguously restricts the section 36B subsidy to insurance purchased on Exchanges ‘established’ by the State.”

Why did the Democrats limit premium assistance to policies bought through Obamacare exchanges established by a state? It was part of a corrupt bargain. In order get the bill through Congress, they had to buy the vote of Democrat Senator Ben Nelson of Nebraska. His vote was bought in the infamous “cornhusker kickback,” but he tried to save face by insisting that the states had to create and run the exchanges. However, 34 states refused to set up these “marketplaces.” This single birth defect will eventually kill Obamacare in those states.

Yet our progressive friends keep whistling. Ezra Klein’s comments are typically clueless: “The Supreme Court simply isn’t going to rip insurance from tens of millions of people in order to teach Congress a lesson about grammar.” This is the guy who concocted an imaginary conservative legal scholar in order to reassure his readers that the Supreme Court would never agree to hear any Obamacare lawsuit. It has already done so twice. And the Supremes will make the final IRS call as well. Today’s contrary ruling in the Fourth Circuit virtually guarantees it.

Klein demonstrates why Obamacare’s supporters almost always get it wrong where the courts are concerned. They can never quite figure out what these cases are about. On Halbig, they actually think the problem is poor word choice. But that case is no more about grammar or “scrivener errors” than the Hobby Lobby case was about contraception. Burwell v Hobby Lobby was actually about a birth defect that Obamacare has in common with much recent legislation—it cedes congressional prerogatives to bureaucrats who then issue unconstitutional decrees.

Oddly enough, the Patient Protection and Affordable Care Act does not specifically mandate the kind of abortion-inducing drugs to which the owners of Hobby Lobby objected. The list of drugs that caused them to file their suit against the government was drawn up by the minions of Kathleen Sebelius at HHS. If Sebelius, exercising the “wide discretion” granted by Obamacare, had kept that list to only the sixteen types of contraception already covered by the company, the Obama administration would not have received last month’s high court drubbing.

But Congress has no authority to grant bureaucrats such discretion either way. It cannot simply hand over its powers to another branch of the government. That is the subject of a recent book by Columbia Law School professor Philip Hamburger, Is Administrative Law Unlawful? Hamburger’s thesis is that federal agencies are under the control of the executive branch and, by definition, have no power to create regulations that legally bind anyone. That is, of course, precisely what HHS attempted when it drew up its list of “must cover” contraceptives.

During oral arguments in Burwell v Hobby Lobby, Justice Kennedy was obviously interested in this issue and its implications for the separation of powers. Among his questions to the government lawyers was the following: “Now, what kind of constitutional structure do we have if the Congress can give an agency the power to grant or not grant a religious exemption based on what the agency determined?” According to Hamburger, it gives us a structure more like that which England’s James I presided over than anything envisioned by the framers.

The latter favored a very weak executive branch. In fact, according to Hamburger, they didn’t want it “bringing matters to the courts or … physically carrying out their binding acts.” This is why the Constitution is so specific about the separation of powers. The framers must have been spinning in their graves when the government lawyers were arguing Burwell v. Hobby Lobby and Halbig v. Burwell. But shady deals like the cornhusker kickback and violations of the separation of powers doctrine are but two of the birth defects with which Obamacare was born.

Another deadly defect in the law is its violation of the Constitution’s origination clause, raised in Sissel v. HHS. Only the House can originate bills that raise revenue, and Obamacare contains countless taxes. The problem? This law originated in the Senate. And the beat goes on. Obamacare was born with so many birth defects that keeping it alive has required no fewer than 42 emergency interventions. Eventually, one of these organ failures will do it in.