With increased Democratic Congressional membership as result of last month’s election, one can expect Speaker of the House Nancy Pelosi and Senate Majority Leader Harry Reid to exert extraordinary efforts to pass legislation liberal Democrats have long hoped to move through both chambers of Congress.

If successful, the legislation will be passed along for the new chief executive’s signature — a president who earned the distinction of being the most liberal senator in a body not wanting for liberal lawmakers.

The combined prospects for mischief by the 44th president and the 111th Congress are worrisome.

Congressional observers have noted, as the Wall Street Journal‘s Naftali Bendavid wrote, that “Democratic congressional leaders, eager to trumpet that change has come to Washington, are looking to enact quickly a series of popular bills in January in such areas as renewable energy, children’s health care and embryonic stem-cell research.” Indeed, this will surely come to be. Yet this synopsis does not begin to encompass the mountains of paper that will surely be sent to the Congressional Clerk’s desk.

But one of the items which is eliciting great concern — by businesses, conservatives, and anyone who cherishes core democratic institutions — is the Employee Free Choice Act. Under this measure a union need not afford employees a secret ballot to decide if they want to be represented. Instead, all that is needed is a simple majority of workers to “check cards” — that is, sign a union authorization card in the presence of a union official.

In 2007, the House passed the Employee Free Choice Act, H.R. 800, by a margin of 241-185, but the same bill (S. 1041) failed to invoke cloture in the Senate by a narrow vote of 51-48, nine short of the required 60 supporters. All members who voted in the Senate did so along party lines (with the exception of Republican Arlen Specter and with the Independents Bernie Sanders and Joe Lieberman voting for cloture as well). At the time, however, it did not matter too much. President Bush would surely have vetoed such law, anyway.

Now, the political make up of Washington is different. President-elect Obama and Vice President-elect Joe Biden are strong supporters of this legislation, and both co-sponsored the bill as United States senators. And, just the other day, Obama transition-team spokesman Dan Pfeiffer reaffirmed the president-elect’s support of the Employee Free Choice Act.

A senior aide to a Republican senator, who is very familiar with labor legislation, told me in a phone call his take of the bill’s drastic overhaul of past precedent regarding the unionization of American workers: “In the past, federal labor law has been neither pro-union nor anti-union. But this hasn’t been going well for the Democrats. … Fewer and fewer people can choose to be in a union. [Democrats] think that it is better for more people to be in a union-they want more and more people in these old economy, unionized jobs.”

This might explain the bill’s provision for mandatory arbitration. If made law of the land, and if a 30 day bargaining period between union and management elapsed without any concrete resolution, the bill requires that negotiations be sent to a government controlled panel of arbitrators for reconciliation. A downright threat to free market practices  this bill would allow for the government to set the terms and conditions of union and employer disputes.

The new Democratic-dominated government, if they are successful with this legislation, surely spur increased membership in America’s failing labor unions. As Glenn Spencer from the Office of the General Counsel in the U.S. Chamber of Commerce noted in an op-ed in Politico:

America’s labor movement … has seen its share of the U.S. workforce dwindle from a high of 35 percent in the 1950s to just more than 12 percent last year. Today, unions represent a scant 7.5 percent of private-sector workers, with the rest of their members employed in government, their only significant growth market. Demographically, the news is even worse: The largest single group of union members is between the ages of 45 and 54, nearing retirement — while just 6 percent of unionized workers are between 16 and 24.

In other words, American labor unions are dying because of dwindling support and old age, and the so-called Employee Free Choice Act is congressional legislation meant to resuscitate labor unions.

I asked the senior senatorial aide what the minority’s strategy would be for opposing the Democrat’s plans. He was sober and stern: “No negotiation. There is talk about a compromise, but we can’t compromise.” A compromise, he said, would indicate that there is an existing problem with the laws that govern labor unions, yet “there is no problem out there.”

Indeed, it is not apparent that there is a great mass of employees yearning for union representation that couldn’t, if they wished, organize under existing laws. So why, then, will Congressional leadership push for a resolution to a problem that does not exist?

And the numbers confirm this correlation. Consider these charts, courtesy of opensecrets.org: 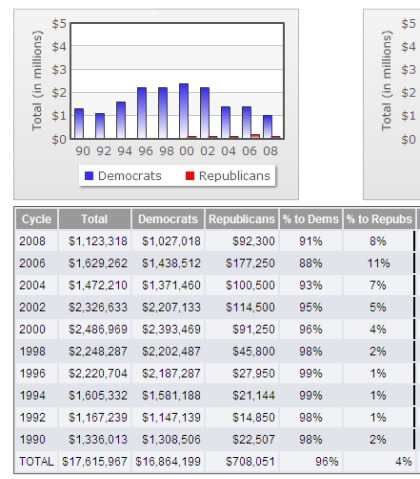 These numbers only show the AFL-CIO’s political donations in the last 18 years. As one can see, the average shows an overwhelming bias in favor of the Democratic Party: 96 percent of all donations have been to the Democrats, while only 4 percent have been made to Republican candidates.

It’s no secret: the Democratic Party benefits monetarily from increased unionization. And lower membership means fewer donations, which in turn means less money for the party.

So rather than the American worker, the biggest beneficiaries under the Employee Free Choice Act will be union bosses and their Democratic allies. In fact, a recent poll indicates, “A majority of both Republican and Democratic voters oppose The Employee Free Choice Act.” The findings are unequivocal:”In fact, when asked their preference if a union tried to organize in their workplace: 81 percent preferred a secret ballot, with only 14 percent preferring the card-check process.” But do not count on public disapproval to prevent this bill from being pushed hard by Congressional Democrats.