You may have seen that the U.S. Supreme Court upheld decisions of the lower federal courts ordering California to reduce the number of prisoners it holds to 137.5% of capacity, and to do so within two years. Right now, California has 154,000 prisoners in a system designed for 80,000 — and this is not a temporary condition. As the decision Brown v. Plata (2011) points out, California has been operating at 200% of its capacity for eleven years. The courts have repeatedly told California that it either needs more prisons or less prisoners — and California’s legislature seems unwilling to do anything about this.

Prisons are not supposed to be summer camp. They are places where we lock people up because they are unwilling or unable to follow the rules of civilized society. (Complicating this is that some prisoners are a major threat to other prisoners. While California Democrats like to joke about prison rape of those that they don’t like, decent people recognize that there is an obligation to protect prisoners from other prisoners.) There is a point where the circumstances are so shocking that even those who are hardliners about punishing violent crime recoil in horror.

Appendix B of Brown v. Plata contains shocking pictures of gymnasiums crammed with bunk beds where prisoners sleep. For a long time, we have recognized that circumstances like this make rape almost unavoidable, because the most brutal of felons have access to the weakest. 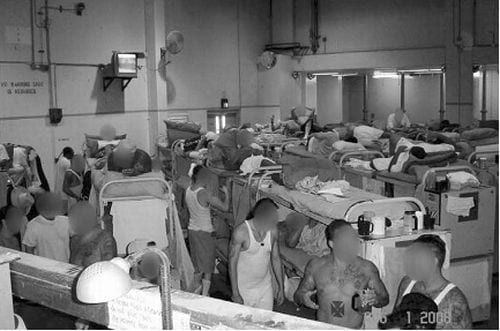 Because there are not enough facilities for mentally ill inmates, “suicidal inmates may be held for prolonged periods in telephone-booth sized cages without toilets.” In some cases, inmates have been held in such cages “for nearly 24 hours, standing in a pool of his own urine, unresponsive and nearly catatonic.” 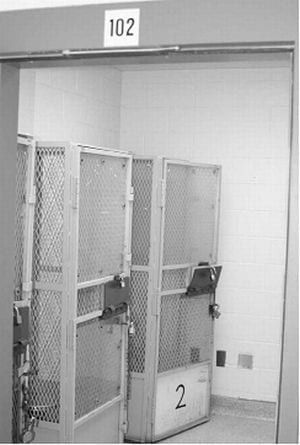 California’s legislature knows that there is a problem, so why isn’t anything being done? Are California Democrats (who control both houses of the legislature) that hostile to raising taxes and spending money? Two years ago, then-California Attorney General Jerry Brown complained about what he called “an extravagant spending proposal for prison medical facilities.” The court-appointed receiver demanded that the state’s new prison medical facility include “regulation-size basketball courts, electronic bingo boards, music and art therapy rooms, and landscaping to hide fences.” Oh yes, and “yoga rooms and horticulture therapy.” Brown pointed out that all of this is “well beyond what is required by the Eighth Amendment” (the one that prohibits cruel and unusual punishment). It sounds like California might not be allowed to expand its prisons except by building something close to a luxury resort.

Another problem is that California prison guards are very well paid. The San Diego Union-Tribune pointed out in 2006 that about one-tenth of California’s prison guards make more than $100,000 a year, because of good pay and overtime. Being a prison guard is a rough job; you have to deal with the scum of society, and a very common form of assault is having prisoners throw various bodily fluids at you. It is an ugly job — but then again, prison guards in many other states do not get paid anywhere near that well. My state, for example, hires prison guards at $13.14 per hour, which is about $27,000 per year. Part of  the reason for California’s remarkable pay (even for an expensive cost of living state like California) is that the guards have a very powerful union, and Californians, in spite of their liberalism, don’t want criminals released from prison.

The ACLU wants California to stop the overcrowding of its prisons, yet it appears that they also want those prisons to be very expensive: bingo boards?  Basketball courts? Yoga rooms? If you read the ACLU’s press release on the subject, you can see that this is just a method of achieving their actual goal: decriminalization of personal quantities of drugs (not just marijuana, which won’t get you prison time in California), and reducing “non-violent property offenses” from felonies to misdemeanors.

This carrot and stick approach is not new for the ACLU. Back in the 1960s, the ACLU decided that they were going to largely eliminate involuntary commitment of the mentally ill, and they used a similar strategy. In Wyatt v. Stickney (M.D.Ala. 1972), the ACLU sued Alabama for the inhumane state of its mental hospitals — and indeed, the director of the Alabama mental hospital system invited the suit. The circumstances were deplorable and conditions were indeed shocking, much as California’s prison system is. Some of what the judge imposed as “Minimum Constitutional Standards for Adequate Treatment of the Mentally Ill” did have some Constitutional basis: for example, “an unrestricted right to send sealed mail” and to receive mail from attorneys, courts, and government officials.

Other parts of the decision, however, included a very detailed list of exactly how many employees in different job classifications the state mental hospital had to have for each of the 250 patients — right down to the number of Clerk Stenographer II positions (three), the number of Clerk Typist II positions (three), cooks, vehicle drivers, and similar support positions. This level of detail seems more like a judge substituting his judgment for that of the legislature, rather than deciding points of law. We now know that the ACLU’s goal was not humane mental hospital treatment, but to force the states to either spend astonishing amounts of money, or to empty out the mental hospitals and make it difficult to hospitalize those who were in need of help. The consequences are visible in every major city today.

The dissents by Justice Scalia and Justice Alito both raise important points about the dangers of federal judges overriding what are primarily legislative decisions — substituting their judgment for that of the people. Nonetheless, as much as we want to be angry at the opinion of the Court, there is clearly something terribly wrong with California’s government.

They refuse to take steps to discourage illegal immigration. This is a non-trivial part of their prison population. They refuse to take steps to discourage the culture of criminality that now dominates inner cities. They do have time to debate whether to require history classes to study “roles and contributions” of “lesbian, gay, bisexual, and transgender Americans.” I fear that if California voters do not start providing some adult supervision to their state government, we are going to end up with a judicially imposed mess equivalent to the deinstitutionalization of the mentally ill.