Why the Newspaper Business Is Doomed 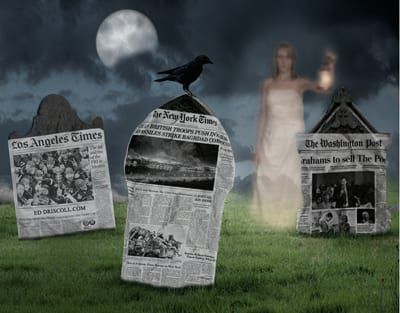 Based on a modified Shutterstock.com image.

Not that this news about the news is news — not after Newsweek was literally sold for a dollar. Understanding why the newspapers are dying isn’t hard either; it’s the internet that’s killing them. Where it gets interesting is why the internet is killing newspapers.

If we want to understand that, first we need to dispose of some media mythology. Since the ’60s (at least) journalists have wanted to proclaim themselves a sort of secular priesthood, above bias, unaffected by politics, objective and aloof; most news organizations took great pains to say they had completely disconnected the newsroom from any hint of mere trade — although journalists took much pride in doing things that sold papers.

Now, anyone who has tried this knows that a pretty large proportion of the ladies of the house just said “no thanks.” A good salesman learned what neighborhoods to visit and what houses to choose to have the best chance of making a sale, and a really effective salesman learned how to make their product so attractive that they got from simply getting in the door to leaving with a check. And every salesman learns you have to expect a lot of “noes” for every “yes.”

Taken down the the core, this is advertising: you need to make sure a lot of people see your product; you have to do your best to make your product attractive; since it costs you time and money to pitch a product to a customer, you want to pick whom you approach; and you have to expect that some people you approach won’t buy, no matter how well you’ve done your job.

Of course, it’s the details that make it interesting. You can explain it mathematically — I promise I won’t — but it comes down to this: you want to advertise to people more likely to buy. When you do this over a large group of people, this is called “targeting a demographic” and you want to show them your product at the lowest cost you can manage.

News printed on paper was great for that originally: printing on newsprint was relatively cheap, and newspapers automatically targeted, at least, people in a certain city. In a big city, there would be several newspapers, with different audiences; New York City is about the last of these, with the New York Times, the Daily News, the Post, and several smaller upstarts. And of course the financial papers like the Wall Street Journal, but they are at least as closely targeted, just to a particular kind of business instead of a geographical region.

The tradeoff for newspapers, though, was that it actually cost a lot of money to print each paper — both a big fixed cost for the presses, and a pretty significant cost. Working very roughly from the New York Times 10K statement , we see they print on average a little more than a million copies a day, so 365 million copies a year at a total operating cost of about $2.1 billion. Which is about $5.75 a copy. The newsstand price is $2; per copy subscription price is much less. They need to bring in around $4 per copy per day in advertising if they hope to break even.

Of course, the Times has a lot of pages; according to a recent rate card, advertising in the “regional general” sections of the paper costs around $35,000 for a full page at the basic rate. With a million copies going out per day, that’s around 3.5 cents per copy for a full page ad. (Of course, there’s a discount for a big ad.)

This brings us back to targeting; newspapers target more closely by having separate sections for, say, arts and entertainment, or travel, or sports. If you buy an ad in a particular section, then you are targeting a particular group of people; what you hope, and experience predicts, is that more people will look at your ad, follow up, and buy something.

But now let’s talk about the Internet. Look at any random advertising-supported web page. If you’re anyone but my cat watching from my lap as I write, and you’re reading this, you can probably find one pretty easily. Working very roughly, it costs about $0.00002 for PJ Media to deliver that page to you; it costs the New York Times $0.05 to deliver a page on paper to their readers.

That is, a page of printed news costs 2500 times as much as a page of bits. Clearly, print is already at, cough, something of a disadvantage. But it gets worse when you consider targeting; a newspaper necessarily publishes many essentially identical pages, with identical ads. On the Internet, every ad is selected and delivered to your particular page, and the companies that serve those ads have become almost creepily good at targeting you the reader with whatever they think you’re interested in.

I sort of abbreviated that advertising saying. The full saying is that 90 percent of all advertising is wasted, but you don’t know which 90 percent. The reality on paper is that it’s probably far more than 90 percent. But when you’re delivering advertising on the Internet, not only can you target the ads more closely, you can tell if it’s working. You actually know when someone is interested enough to follow a link, and with a little care building your website, you can easily measure how many people who “click through” the ad actually buy something.

The effect of better targeting is that the return on investment for each ad is higher. Internet ads are cheaper to produce, and do their jobs better. It’s hard to say exactly how much better, but it’s easily 100 times better.

When you can deliver a product that’s 100 times as good, for 1/2500th of the cost, the market advantage is immense.

Megan McArdle looked at the same issue recently with a piece in her column at Bloomberg. In it, she gets the problem right:

Or rather, he’s right about the competition, but wrong about the source. The competition does not come from other news producers; it comes from other people selling ads. And most of those companies are not in the business of producing news.

The problem being that Megan, who I think very highly of in general, has been seduced by that same notion of journalism as something special and noble. Sorry, while you may be in the business of producing news — Bloomberg gets most of it’s revenue actually selling data to people in finance — most everyone else is in the business of selling ads, whether they know it or not.

Which brings us back to the question of why someone as smart as Jeff Bezos would buy the Washington Post. As I said, I don’t believe for a minute that Bezos was helping out his friends the Grahams, or that he just wanted to buy his way into Washington society, or that he bought it as a rich man’s toy. I think he has an idea that it can be made profitable.

He won’t do that just by cutting costs — those costs are completely dominated by printing costs.

Unless, of course, he can eliminate printing, and improve the value of advertisements.

It happens I have sitting next to me no fewer than 3 Amazon Kindles, including my very first, first-generation Kindle, and I’m reminded that print isn’t necessarily the only platform for news.