Tea party protesters today filled the West Lawn of the Capitol in a quickly-convened protest against the Obama administration’s health care reform bill.

According to the Los Angeles Times:

Clogging the sidewalks and streets of Capitol Hill were at least hundreds — no official estimate was yet available — of loud, furious protesters, many of them tea party opponents of the health care overhaul.

Hundreds of people were clogging the sidewalks and streets of Capitol Hill? MSNBC said:

Located at the West Front of the Capitol in the grassy area below the steps, are according to two Capitol Hill Police officers [sic. Don’t they teach these kids grammar these days?] between 1,500 to 2,000 Tea Party protesters.

Fox News made it “thousands,” and the Washington Post first estimated hundreds and then stopped mentioning crowd size at all.

Yes, it’s time for another game of “Legacy media, let’s estimate that crowd.”

Long-time PJM readers may recall that we went through a similar exercise with the September 12, 2009, tea party protests in D.C. (see the articles on the 14th and 17th of September.)

So let’s apply the same methodology. 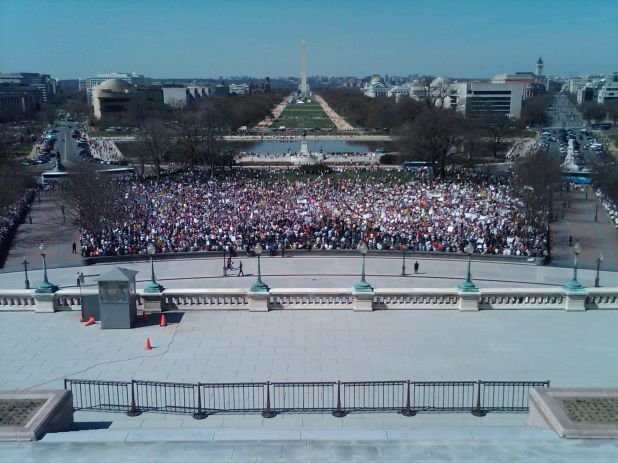 That’s clearly a picture of the West Lawn of the Capitol; the crowd is pretty well concentrated between the Pennsylvania Avenue and Maryland Avenue extensions, and from the bottom of the steps back to South Capitol Circle.

Since the last time, I’ve gotten a copy of Google Earth Pro, so it was straightforward to compute the area of that section of the lawn: about 16,500 m2 (or in English that’s about 20,000 square yards, or around four acres.)

Using the rule of thumb from the Park Service of about 1.8 people per meter square, that would give us 29,700 people. That picture shows the whole area wasn’t full yet, so let’s be conservative: say it’s 75 percent full, or call it 22,000 people at noon.