The Death of a True British Hero

Bill Leith was cremated on March 13. There will be no front-page story, no spread in OK magazine, and no Max Clifford PR-perpetrated media blitz. Bill lived out his life and career with dignity and professionalism. He was a modest and old-fashioned British hero who never, ever sought the limelight.

Jade Goody died on March 22. Though many people in Britain feel she is a national figure of greatness, I could not help but cringe every time I saw reality television personality Jade’s malevolent minders storming about as the paparazzi snapped away during her battle with cancer. Bill Leith also fought cancer with courage. He had served his country with distinction and worked until cancer and a stroke overtook him.

Goody became a household name in January 2007 because she went berserk on Big Brother when the Indian “Bollywood” actress Shilpa Shetty dared breathe the same air in the confines of the dreaded house. Her hostility to Shetty was breathtaking and her vulgar epithets were regarded by a large swathe of Britain as repugnant. That is how Jade became a national figure.

In its rapid descent into the dumbing-down of a nation that once gave the world true celebrities of the ilk of Peggy Ashcroft, John Gielgud, and Laurence Olivier, Britain’s media engaged in a bizarre frenzy when Jade married her fiancé Jack Tweed. He was let out of prison for the occasion. Many found the circus around this private ceremony tawdry and disturbing.

Bill Leith married his longtime love Stroma shortly before he died. Like Jade Goody, he was able to be joined for eternity with the love of his life. The resemblance stops there. To the very end Bill never basked in celebrity culture; his military valor in defense of his country will go unnoticed save for the men who served alongside him.

He was based in Palestine during partition and we had many a heated argument about the right of Israel to defend itself. Bill had never forgiven the Stern Gang and Menachem Begin for their deeds during the last days of the British Mandate. I tried to convey the anguish and anger of Jews who had survived the death camps but Bill saw the suffering of his troops as a betrayal and the bombing of the King David Hotel in Jerusalem as an unforgivable tragedy. We agreed to disagree; in my own times of hardship Bill was, to coin a cliché, always there and steadfast in his efforts to attenuate my tribulation. It is a tribute to Bill’s generosity, sincerity, and profound patriotism that despite his views on Israel I, a rabid Zionist, remained an admirer every day of our thirty-year acquaintance.

Serving both his and her majesty’s government in many theaters of war as a pilot and later in special operations, as well as having endured being a POW in Korea, in semi-retirement he became an outstanding aerial photographer, filming from an enormous crane well into his seventies. He would have climbed under a table rather than appear on the cover of OK.

Bill changed my life when he introduced me to the women pilots of Air Transport Auxiliary. Without the pilots of ATA it is very possible the Battle of Britain in 1940 could have been lost and Buckingham Palace turned into the Reichstag. It was 1987 and I was a script executive at Anglia Television. I went into Bill and Stro’s aerial photography studio in Edgware Road and Bill said with Scottish flair, “Lass, did you know RAF men had female instructors?” I thought this was a Bill bubba-meisseh (a Yiddish word for tall tale.) He was known, like so many pilots, for spinning yarns, but I soon learned that the extraordinary women of Air Transport Auxiliary had gone on after the war to become flight instructors. Bill had been trained by Monique Agazarian, on whom the character Angelique Florian is based in my novel Spitfire Girls.

When Bill imparted the stunning story of the lady ferry pilots to me I literally high-tailed it back to my office at Anglia Television and told the head of drama, John Rosenberg, about the “Spitfire girls.” We optioned the story from Bill and though Anglia never made the TV series, I wrote the book, first published in Scotland by Hunter Steele’s Black Ace Books in 1998 and soon to be released in paperback by Random House. Bill introduced me to many of these formidable ladies, including Lettice Curtis, who put me to work raking leaves before she would submit to an interview. When she did I felt she could barely contain her disdain; I later learned from Giles Whittell’s book Spitfire Women of World War II that Lettice thought of Americans as a “bad smell.”

Bill took me to meet Anna Leska Daab and Maureen Chase Dunlop-Popp, who also flew countless types of aircraft for ATA seven days a week, often with no breaks during Britain’s darkest hours. The story of the heroic Spitfire women who never sought fame or fortune — many came from working-class backgrounds — has been a part of my life for twenty-two years and I bless Bill Leith every day for bringing their story to my attention.

Jade Goody passed away on March 22, 2009. The tabloids had followed her story for weeks, and though it is admirable that her plight has resulted in a spike in young women having cancer tests, the media obsession with her has become intolerable. Millions of men and women have cancer, suffer through chemotherapy and radiotherapy, and see their livelihoods curtailed. There are no television cameras or million-pound magazine exclusives. Many people lose their jobs, businesses, and homes through prolonged illness. Indeed, the toll Bill’s illnesses took on Stroma has been compelling. In America illness can mean bankruptcy and foreclosure. The fact that Jade’s huge deals with the media were made to meet the costs of her sons’ education was noble but included the release of a “pre-death” memorial issue of the glossy magazine OK. Her death at age 27 is tragic but the depths to which the media plunged in this saga are an adjunct of the moral turpitude of worldwide celebrity-centric culture.

In the midst of the multi-million-pound media hype over Jade Goody, the British Legion had been asking that its D-Day commemorations be recognized by the government. Until remonstrations from a tabloid newspaper ensued in late March there had been no financial help on offer for the surviving number of British veterans to cross the Channel to Normandy and commemorate the 65th anniversary of the fateful landings. Like the D-Day veterans, Bill Leith died unknown but he served his country with courage. He ran in charity marathons around the world over several decades even when his health was faltering, fathered five fine sons, and worked to the last day of his life sustaining an aerial photography business. Jade Goody, rest in peace, may be a hero to millions, but Bill Leith is my idea of a great Briton. 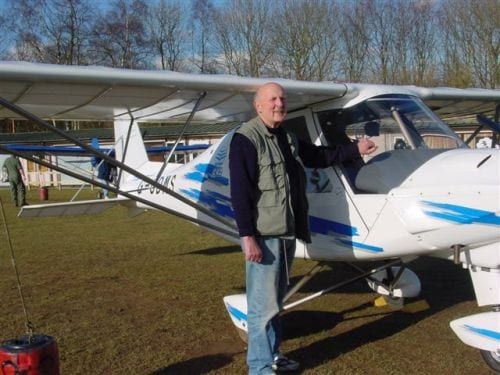