Rangel Convicted on 11 of 13 Corruption Charges

The former chairman of the House Ways and Means Committee, Rep. Charlie Rangel, has been convicted on most of the corruption charges brought against him:

“We have tried to act with fairness, led only by the facts and the law,” Lofgren said. “We believe we have accomplished that mission.”

Rangel now faces a variety of potential punishments, from reprimand to expulsion from the House. Both Ed Morrissey and Jazz Shaw predict the reprimand, which amounts to telling Rangel that he did a no-no, but on formal stationery.  I join them in their justifiably cynical prediction.

As for Rangel, he tried the entertaining gambit of walking out on Monday’s proceedings against him under some pretense about his legal representation.  Next he’ll lay down another race card, to set himself up for the always useful Absolute Moral Authority Card. 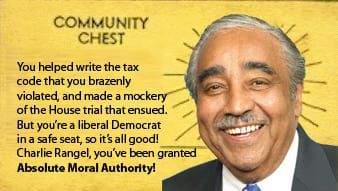 Which gives me the opportunity to update the viral classic.

Update: Along with the Absolute Moral Authority Card, Rangel ought to get a Golden Ticket.

Update: To no one’s surprise, Rangel “deplores” the verdict.

Bryan Preston has been a leading conservative blogger and opinionator since founding his first blog in 2001. Bryan is a military veteran, worked for NASA, was a founding blogger and producer at Hot Air, was producer of the Laura Ingraham Show and, most recently before joining PJM, was Communications Director of the Republican Party of Texas.
Read more by Bryan Preston