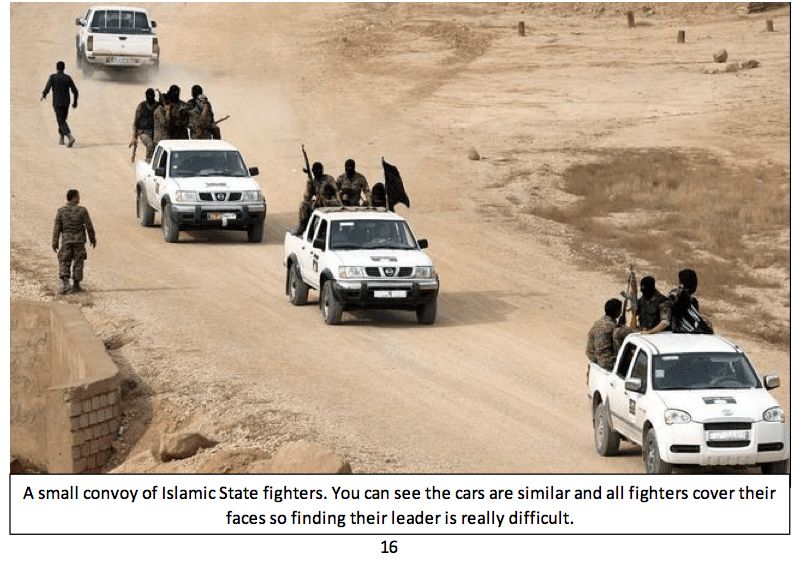 From “The Islamic State” e-book

A recently published e-book titled “The Islamic State” details everything from ice cream money for jihadists to special ops forces in ISIS ranks, talks about how the caliph hides in plain sight, and suggests that after Kobane they can fight under the radar with drive-bys on bikes.

Clocking in at a uniform 100 pages, like other titles in ISIS’ “Black Flags” series, the book is a sequel to 2014’s “The Revived Caliphate” and includes chapters such as how to hold territory and how to train children, aka “lion cubs.”

It stresses that the Islamic State doesn’t and won’t recognize the legitimacy of the United Nations, thus “uses the rifle (i.e. the AK-47) alone, and if it ever negotiates, it does so on its own terms” and advocates “breaking borders… with bulldozers.” Showing pictures of new coins, ISIS says it’s “introducing real Gold and Silver currency to remove the illusionary debt placed on the world by the IMF” under “the Islamic Bank.”

“By giving the Muslims unity and economic independence, and by weakening America considerably, it is growing itself to be the next world superpower only rivaling Israel.”

There are two types of people in Islamic State leadership, the book states: mujahedin who served under Abu Musab al-Zarqawi in al-Qaeda in Iraq, and ex-Baathists who served under Saddam Hussein, called the “perfect people” to recruit because of their traditional military expertise. The Baathist officers are lured with a promise of the same pay they received under Saddam and retention of their rank. They credit coalition prisons for providing the networking opportunities between the jihadists and Baathists.

ISIS leader and self-proclaimed caliph Abu Bakr al-Baghdadi, the book claims, is dressed like a regular mujahid in public, paranoid about carrying a cell phone or using electronic communications, and “always cautiously on the move for security reasons… hiding is comfortably possible compared to Osama bin Laden who had less security, more spies against him and less places to hide.”

“Unlike the medieval times when a king was safe in a guarded castle, leaders today cannot have one central location. Khalifah Ibrahim is always on the move in a convoy of cars, with loyal bodyguards who he knows since the American invasion in the mid 2000s. The secret is not to have too much cars which will give the impression (to local people and even drones) that an important person is in one of the cars. But not to have too less cars either, in case of ambush.”

Some rumors were spreading across Twitter on Wednesday that that Baghdadi and/or other high-ranking leaders had been killed in airstrikes, but nothing had been confirmed as this story was published.

The book rips off infographics from other news sources showing the size of territory claimed by the Islamic States and the geographic origin distribution of foreign fighters.

It lists the skills that recruits learn in the ISIS training camps, including “assassination techniques” (they claim to create silencers for their guns and “excel” at drive-bys and “sticky bombs”) and “chemical warfare.” They get a graduation ceremony at the end of the course; “if they want to do a martyrdom operation, they are put in a waiting list.” Then come get days off and an allowance. “With this money they can buy more weapons, explosive-martyrdom belts, or even simply food like ice cream from the Souks (shopping centres) when they are free from battle and back in the city.”

In the training camps for children, ISIS claims they’re taught “the art of being an inspiring speaker” along with Arabic, the Quran, judo, and weapons training. It includes the chilling images from an earlier ISIS video of a young Kazakh boy shooting men in the head said to be “Russian spies.”

When it’s time for battle, commanders “will decide a strategy either by making a small model of the building/location they are targeting, or a Google maps print out, or something similar.” The book claims al-Baghdadi does not micromanage his commanders, which gives them “a lot of flexibility and makes the Islamic State harder to defeat” unlike “conventional national armies who have a long chain of command and a common pattern in style of war.”

Despite the Kobane defeat, the book stresses that ISIS “will never waste their energy and resources on targets they know are impossible to get” yet will “calculate if it is better to reattack or retreat instead of seeking petty revenge.”

“But once they are strong enough, they will surround what they need, and pounce on it from all sides until it is theirs (like they are planning for with Baghdad [the capital city of Iraq] for example.)” 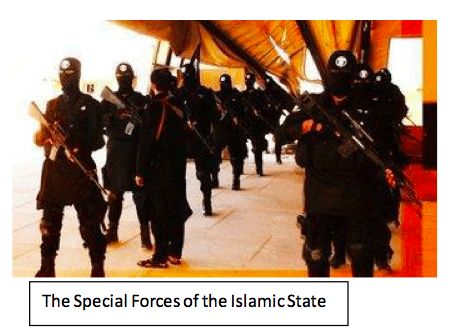 Image from “The Islamic State” e-book

It faults “a strong Western media campaign” for defeating their “urban warfare tactics” in Kobane with air support (while not expressly admitting defeat), but claims “the Islamic State was winning the battle for the hearts and minds” of “many” Kurdish Muslim youth.

“Kobane gives us an insight and preview of the battles Islamic fighters will have to face in the future. A warzone wherein fighters will have to face constant air bombardment day and night from the enemy in the sky, while they have to slowly advance in small groups and maintain a pipeline of constant weapons and food.” Those techniques include burning tires to release enough black smoke to obscure the location of jihadists, using motorcycles or bicycles for small “hit and run” attacks instead of drawing attention with their pickup convoys, and expanding underground tunnel networks.

The book goes into detail about the governing structure when ISIS takes over a city or “governate,” building Sharia courts, seizing local industries, and assigning a media channel to the area to make propaganda videos. “The Islamic State International Expansionalist Project” touts loyalty statements from established terrorist groups including Ansar al-Sharia in Libya, Boko Haram in Nigeria, Ansar al-Tawheed in India, “subgroups” of AQAP in Yemen and AQIM in Algeria, and “many sleeper cells who are within [Saudi] Arabia who have secretly pledged to awaken and support the Islamic State when it enters Arabia.” They credit their allure over al-Qaeda to being “not just a guerrilla group.”

Hat-tips toward ISIS may not be as strong as claimed pledges of allegiance; Boko Haram, for example, is an al-Qaeda affiliate that has publicly praised ISIS and declared a caliphate in part of Nigeria.

They rip off a report from DEBKAfile, the Israeli intelligence website, about the strength and stealth of their elite special forces unit.

“The Islamic State also pretends to be the Iraqi armies SWAT (elite police force) and raids the houses of leaders in the Iraqi government, charging them under the crime of Terrorism,” the book states. “When the leader replies he is not a (Islamic) Terrorist but part of the Iraqi Shi’a government, they then inform him that he has confessed to his guilty crime and that they really are the Islamic State. He is shocked, but then it is too late. He has to dig his own grave, and then they shoot him.”

As almost a spinoff from the recent debate in Washington about winning the war against extremism with more than bullets, the Islamic State book said that they have “learnt that fighting and expelling an enemy is not sufficient to win a war, and that securing a territory, then providing for its people is the most successful way to win a long term war.”

But to keep “a good family life,” it lists the punishments under Sharia law ranging from death for insulting Islam, chopping off hands for stealing, 80 lashes for drinking alcohol, and stoning for adultery if married or have ever been married (80 lashes for the never-married).

They’re trying to lure residents with free utilities and public transportation, three free restaurant meals a day in Raqqa, and money giveaways. They cite one tweet stating that “this is how men are meant to live,” in a place where you can “purchase hand grenades from street vendors” and “most households have fully automatic weapons.”

The book claims that while ISIS has beheaded Western journalists, with the new year the group “changed its position and is being a lot more transparent with journalists.”

As examples they cited the videos of British journalist John Cantlie, a hostage seized in November 2012 who is now forced to do propaganda pieces for ISIS, and German journalist Juergen Todenhoefer, who was allowed in (and out) by ISIS last December.

Their own media structure is so diffuse — from “professionally edited videos” and scores of social media accounts (including coordinated hashtags) to e-books and magazines — because “by not having a website, no one can hack it and claim an online victory.”

“Each province has its own responsibility in creating its own videos and social media accounts to share its successes. By decentralising everything from the core leadership, even if a province fails online or offline, the leadership and overall Khilafah (Caliphate) leadership project is still safe and can grow elsewhere.”

The book notes that social media is its own kind of jihad. “What the Islamic State has done for Islam online: Just do a quick search for the word: ‘Islam’ on youtube: What we see is that even though Muslims have been trying to tell people about Islam for the past 20yrs, there have been more searches for ‘Islamic State’ on youtube in the past 3yrs than there have been for ‘Islam’ since youtube has ever existed.”

Still, out of frustration that Twitter suspends ISIS accounts with increasing frequency, the book features a drawing of a black ISIS bird aiming an RPG at a bloodied blue Twitter logo bird.

MORE: How ISIS Plans to Sack Rome and Inside an ISIS Handbook for Foreigners Running to the Islamic State