WASHINGTON — In 1979, 66 Americans began 444 days of captivity as victims of the Islamic Revolution, and Jimmy Carter’s presidency would fall victim to his handling of the protracted crisis.

Today, a solemn milestone was reached in an Iran hostage crisis that has lasted longer than President Obama’s time in office.

Robert Levinson, a 65-year-old retired FBI agent and father of seven, was working as a private detective on a cigarette smuggling case on Kish Island, an Iranian resort port in the Persian Gulf with looser entrance requirements, when he disappeared on March 8, 2007.

Today, Levinson became the longest held U.S. hostage in history, passing Terry Anderson’s 2,454 days in captivity at the hands of Hezbollah before being freed in 1991.

“As we approach the upcoming holiday season, we reiterate the commitment of the United States Government to locate Mr. Levinson and bring him home safely to his family, friends, and loved ones,” the White House said in a brief statement this morning, acknowledging Levinson was “one of the longest held Americans in history.”

“We welcome the assistance of our international partners in this investigation, and we respectfully ask the Government of the Islamic Republic of Iran to assist us in securing Mr. Levinson’s health, welfare, and safe return,” said the statement from press secretary Jay Carney.

By now, the administration has conceded that discussion about Levinson — and two more Americans being unjustly held by Iran, Marine Corps veteran Amir Hekmati and pastor Saeed Abedini — was at the most a sideline conversation at the P5+1 talks in Geneva and the three men were not included in conditions under which sanctions would be peeled back.

“The negotiations that we’re having through the P5-plus-1 with Iran are related strictly to Iran’s nuclear program and the importance of Iran bringing that nuclear program into compliance with their international obligations,” White House spokesman Josh Earnest told reporters today during Obama’s fundraising swing through L.A.

Rouhani’s predecessor, Mahmoud Ahmadinejad, dropped a hint about Levinson and basically acknowledged he was in their custody or within their grasp in a September 2012 interview with CBS. “I remember that last year Iranian and American intelligence groups had a meeting, but I haven’t followed up on it,” he said. “I thought they’d come to some kind of an agreement.”

When asked if there had been any progress in locating Levinson, Earnest said today, “Nothing that I’m able to report at this point.”

Levinson’s wife, Christine, though, has reported her frustration from years of trying to push the administration to get her husband home. After releasing in January photos the family had received from his captors, Christine Levinson said she’d gone to the press with the pictures, received nearly two years earlier, because “there isn’t any pressure on Iran to resolve this.”

“No one would have predicted this terrible moment more than six and a half years ago when Bob disappeared,” she said today. “Our family will soon gather for our seventh Thanksgiving without Bob, and the pain will be almost impossible to bear. Yet, as we endure this terrible nightmare from which we can not wake, we know that we must bear it for Bob, the most extraordinary man we have ever known.”

“To whoever is holding Bob, I ask again for your mercy. Please let him go to reunite with his family.”

Washington has admitted they believe the government of Iran knows more than it claims, and even tried some PR antics in 2011 to deflect blame from Tehran in hopes that the regime would free him. In August 2012, State Department spokeswoman Victoria Nuland released a statement marking Levinson’s 2,000th day in captivity.

“The United States reiterates its call on the Government of the Islamic Republic of Iran to provide any information on Mr. Levinson’s whereabouts and to help ensure his prompt and safe return to his family,” Nuland said. “Determining Mr. Levinson’s whereabouts and reuniting him safely with his family continues to be a priority for the U.S. Government. The United States also continues to welcome the assistance of our international partners in this investigation.”

The family even tried a White House petition last December in an effort to cross the threshold needed for an administration response.

Levinson’s eldest son, Dan, wrote today in the Washington Post that the “cryptic messages” his father is forced to hold in the hostage pictures hold meaning they “still do not understand,” but “what we do understand is that the Iranian government takes great pride in its security efforts.”

U.S. officials reportedly told the Associated Press in January that they believe the Iranian government is behind the hostage photos and video emailed to the family.

“This is not how it was supposed to be. My father is 65, my mother 63. These are the years when my parents were supposed to be enjoying the fruits of their labor. They should be taking vacations and visiting their grandchildren. Instead, my mother is constantly on the phone with U.S. officials and pleading with the Iranian government to help us,” he wrote.

“Given the negotiations between the United States and Iran over Tehran’s nuclear program, we particularly hope that officials can use their ongoing contact to resolve my father’s case. Doing so would show the world that our two countries can work together to resolve our differences and would demonstrate Iran’s willingness to help an average American family’s plight.” 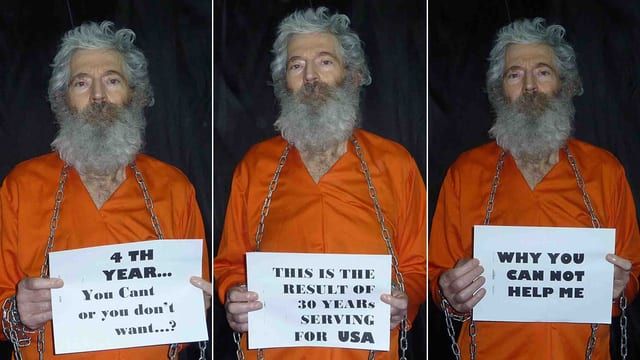 Levinson served 28 years with the FBI and DEA. The Bureau has been probing his disappearance since 2007.

“Exhaustive efforts have not yet been successful in locating Bob or establishing a dialogue with those who are holding him, but the FBI remains wholly committed to bringing him home safely to his loved ones,” said FBI Director James Comey on Monday.  “We will continue to follow every lead into his disappearance, and we ask anyone with information regarding his disappearance to contact the FBI.”

When asked today if Levinson was ever part of negotiations over the past few weeks, State Department spokeswoman Jen Psaki replied, “It was — the focus of that — of the meetings in Geneva were on the nuclear negotiations.”

“Obviously, this is an issue that we remain committed to,” Psaki continued. “And — and — and having a moment like today where we’re acknowledging that he — he has been detained now or missing, I should say, for longer than any other U.S. citizen reminds us of, you know, how much his family has been thinking about it and reminds us of, you know, how much we’d like to see him returned home.”

When pressed on whether the U.S. even found out from Iran where he is, Psaki said, “I just don’t have any update I can — I can provide on that front.”

There hasn’t even been any movement, though, on the release of Americans whose whereabouts in Iran are no mystery.

Hekmati, a 30-year-old Flagstaff, Ariz., native, was arrested and charged with spying in August 2011 while visiting his grandmother in the country. Last year, after a televised coerced confession, Hekmati was found guilty of being “corrupt on Earth and an enemy of God” and sentenced to die. The verdict was ruled “not complete” on appeal and Hekmati will be retried.

His congressman, Rep. Dan Kildee (D-Mich.), noted as the weekend agreement with Iran over its nuclear program was announced that “releasing Amir Hekmati, my constituent who continues to be imprisoned in Iran, would be a tangible demonstration that it is serious about ongoing diplomacy.”

Behind bars in Tehran’s notorious Evin prison, Hekmati has been held in solitary confinement and waged a monthlong hunger strike that further deteriorated his health. Back home in the U.S., his father was diagnosed with terminal brain cancer.

Two months ago, Hekmati, a decorated veteran of Operation Iraqi Freedom, tried pleading his case directly in a letter smuggled out the prison to Secretary of State John Kerry.

“For over 2 years I have been held on false charges based solely on confessions obtained by force, threats, miserable prison conditions, and prolonged periods of solitary confinement,” Hekmati wrote in the letter obtained by The Guardian. “This is part of a propaganda and hostage taking effort by Iranian intelligence to secure the release of Iranians abroad being held on security-related charges.”

“I had nothing to do with their arrest, committed no crime, and see no reason why the U.S. Government should entertain such a ridiculous proposition,” he continued. “I do not wish to set a precedent for others that may be unlawfully (obtained) for political gain in the future. While my family and I have suffered greatly I will accept nothing but my unconditional release.”

Abedini, an American citizen and Idaho resident who converted to Christianity as a teen, had been forced to flee Iran once before for starting a network of home churches in the Islamic Republic.

He was arrested in 2009 on a visit back to Iran to see his family, warned not to evangelize, then was arrested again in July 2012 when he re-entered the country for humanitarian work. The pastor was thrown into Evin prison, and has suffered abuse both at the hands of his captors and from other inmates who self-identify as al-Qaeda. “He’s not going to survive even a few months in that prison,” his wife, Naghmeah Abedin, told CNN.

Several senators have taken up Abedini’s cause, telling Iran that it’s violating “numerous Iranian laws and international obligations” by not guaranteeing Abedini “his right to freely practice his religion of choice.”

This month, the full Senate and a House committee both passed resolutions calling for Abedini’s release and condemning Iran for its persecution of religious minorities.

“We will not sit back and watch as Americans are detained due to their religious beliefs,” said Sen. Rand Paul (R-Ky.), a co-sponsor of the legislation that passed by unanimous consent. “Our government must call on Iran to release American Pastor Saeed Abedini and all other individuals detained based on their religious beliefs.”

“It’s our view that all of these Americans should have the opportunity to come home,” the spokesman said. “And as the statement pointed out, the United States government has made a respectful request of the Iranian regime during this holiday season to consider on humanitarian grounds releasing these three Americans — or at least releasing the two Americans that we know are detained, and locating the whereabouts of the third, Mr. Levinson, who as of this week is one of the longest-held American captives in history.”

Christine Levinson tried to mark that grim milestone in the most meaningful way she could.

“Bob, if somehow you see or hear these words: Stay strong,” she said. “You have a new grandson, just a month old. We can’t wait for you to meet him. We love you and will never stop working to bring you home safely.”