Agents of Incompetence, Part 423: Will Pellet Gun-Gate Ever Die?

Stop me if you’ve heard this one before. Customs officers raid a container of Airsoft pellet guns and claim to have captured a shipment of machine guns. The Bureau of Alcohol, Tobacco, Firearms, and Explosives (ATF) steps in and claims that with a little drilling here and a little drilling there … and then replacing 90% of the parts of the toy, you might just be able to claim this is a gun.

If this absurd story sounds familiar, it is because we’ve covered it in excruciating detail. We’ve talked to Airsoft importers and dealers in several countries, professional soldiers and gunsmiths, and the government agencies. To date, Customs has punted all questions to the ATF, and the ATF is dodging FOIA requests that would expose whether or not they have a legitimate claim.

The consensus opinion of those interviewed in these preceding stories is that the ATF claim is not credible, nor is their response since making this claim.

If these toys are indeed easily convertable to weapons, then the ATF has a duty to stop all imports of them, confiscate guns at the distributor and retail level, and then order a consumer recall of all weapons. Those that failed to turn in these toys would be subject to long prison sentences for felony convictions for violation of several federal laws.  Instead, these exact same toys — the WE Tech M4 and WE Tech M4 CQBR Airsoft guns — are available to anyone with a credit card and an internet connection, or to anyone within driving distance of an Airsoft store that carries these high-end, plastic BB-firing replicas.

Customs has not stopped the importation of these toys. The ATF has issued no recalls, nor ordered these toys to be turned in. The government agencies involved in this ridiculous snafu don’t want to make a federal case out of this, which they should or would if these toys are a potential terrorist threat.

There is every indication that they simply want the story to go away without admitting they were wrong.

Unfortunately for them, Fox News reporter Diane Macedo didn’t want to let the controversy die. She drudged up the nearly two-month-old story one more time for an “exclusive.” Most of the ground Macedo covers is old news to readers of Pajamas Media, but she did make several interesting claims — including that one “expert” has reversed his earlier position that the ATF claim wasn’t credible:

When the ATF seized a shipment of 30 of these guns in October from a port in Tacoma, Wash., it said they could be “readily convertible” to machine guns. But gun experts called that claim absurd and said the ATF was overstepping its bounds.

Now one of those critics is reversing his position, saying at least one Airsoft manufacturer has taken the quest to be authentic a little too far.

“The Airsoft can be converted to an AR-15,” firearms manufacturer Leo Gonnuscio told FoxNews.com after testing the make and model of Airsoft guns seized by the ATF.

Having concluded that several other Airsoft guns could not be converted to fire real ammunition, Gonnuscio said he was surprised to find that he was able to transform this particular gun to the real thing — and with “minimal work,” because its bottom half, or “receiver,” is so similar to an AR-15’s.

To make the Airsoft receiver function just like an AR-15, Gonnuscio said, “All you have to do is drill one hole.”

We attempted to check Macedo’s claim that Gonnuscio has reversed his position, but we were unable to find any mention of his name in internet searches in connection with earlier versions of this story where he claimed something else.

For that matter, we’ve found scant evidence that Gonnuscio is a firearms manufacturer, in the sense that he owns a facility manufacturing firearms.

If Google Maps is correct, Kind Mountain Gun Works, Gonnuscio’s company, operates out of a residential address in Cornelius, Oregon, that has seen better days, and searches on his name suggest Gonnuscio is a gunsmith who subcontracts simple repairs from Portland area gun stores. There is no indication he has any particular expertise or knowledge of the AR-15 or M-4 platform.

Compare this to our previous testimony from an importer/distributor, a gunsmith that specializes in the AR-15 platform, and a former Army infantryman intimately familiar with the M4 who now provides technical support for a distributor of the very Airsoft guns in question. Leo Gonnuscio, a firearms manufacturer (of what, we have no idea), claims that by drilling one hole in the lower receiver you can convert a toy into a weapon.

Here is a real lower receiver. It is one of these holes that Gonnuscio says must be drilled. Is it “all you have to do,” or is there far more? 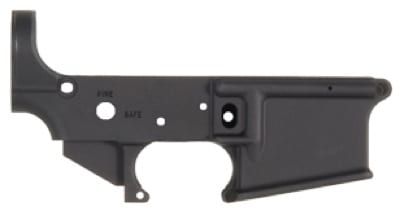 The reason that you have to drill the “one hole” is that the entire top half of the Airsoft gun will have to be thrown away and replaced with a real barrel, gas tube assembly, handguard, sights, bolt, carrier, charging handle, forward assist, etc. All in all, you’d have to buy all the real gun parts you see partially assembled below to be held in place by a pin driven through that “one hole.”

If you’re thinking to yourself “good grief, that’s replacing almost the entire thing,” you are absolutely correct.

You might also be able to use the same pistol grip, buffer assembly, and buttstock, but our expert infantryman, Jon Dibble, claimed that his team could not get a real AR-15 magazine seated in the Airsoft lower. Also, our gunsmith says categorically that the trigger pack will not work without major modification and that a real hammer simply is not operable with the WE Tech lower.

In short, even with these replacement parts, the cobbled-together gun won’t fire. Period.

The rest of Macedo’s reporting is just as terrible. Macedo claims that the purchase of all the real gun parts, plus the Airsoft rifle that would be cannibalized and largely discarded, would cost roughly $1,100 dollars, which is quite high. A basic kit containing all the gun parts can be had for less than $500, and the Airsoft rifle itself can be found for roughly $350. She fails to make a case as to why criminals or terrorists would pay this kind of money for a toy gun they would largely discard, when real used AR-15s can be had through unregulated private sales for hundreds of dollars less.

Even in his best-case scenario, Gonnuscio claims the weapon resulting from such an Airsoft conversion would fail halfway through its first magazine — that’s less than two seconds of fully automatic fire. What he does not specify — or perhaps what Macedo simply chose not to report — is that when the gun self-destructs after his own estimate of 15-20 rounds … it may very well seriously injure or kill the operator.

In short, this story is about investing an inordinate amount of time, skill, and money to create a poor copy of an easily obtainable commodity, one that stands a significant chance of seriously injuring or killing the operator the very first time it is used.

Macedo’s own reporting shows that the ATF has not moved to seize any more of these Airsoft toys she hopes to cast as machine guns. They obviously are starting to see the absurdity of their previous position.

Maybe she should consider the reasons why that may be so before she writes her next “exclusive” about “plastic guns” that will slip through airport metal detectors.