UPDATE: The Israeli Ministry of Foreign Affairs published the MFA NewsFlash Newsletter today, Nov. 11 (free registration), with the article “Documented proof of Iranian complicity in arms smuggling to terrorists” as the top story, crediting Bob Owens’ Confederate Yankee blog for helping identify the source of Iranian rockets captured by American forces in Iraq that match those captured among the 500 tons of ordnance captured from the MV Francop.

This morning, I was contacted by the Israeli Foreign Ministry about a photo I had blogged about on July 15, 2007, regarding a Shiite rocket attack on U.S. forces in Iraq.

The rockets recovered by the Israeli Navy last week, bound for terrorists in Lebanon, are identical to those Iran provided to Shiite militias targeting American soldiers in Iraq. There are numerous similar reports of Iranian weapons being shipped to the Taliban in Afghanistan, including one cache uncovered just two months ago.

During the summer of 2007, the escalation of violence from Shiite militias peaked in Iraq, and the government of Iran was implicated for supplying late-model weapons directly to these groups. Some of the most damning evidence came in July 2007, when 34 Iranian rockets were recovered by elements of the U.S. Army’s 3rd Heavy Brigade Combat Team on July 12 after an unmanned aerial vehicle (UAV) discovered 46 launchers. Twelve rockets from that location had been fired at Forward Operating Base Hammer one day before.

I asked for and obtained photos of the rockets and launchers from Multi-National Forces-Iraq (MNF-I) Public Affairs, and subsequently published a post to my personal blog.

Among the photos published on Confederate Yankee was this close-up photo of an Iranian 107mm rocket on a crude launcher, its markings plainly visible: 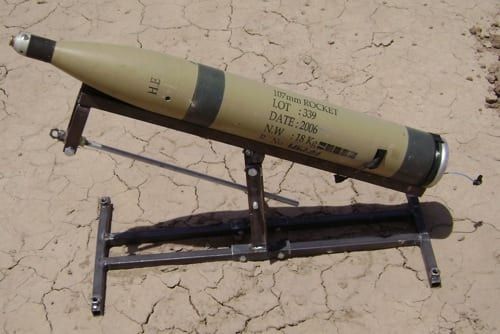 It was manufactured in 2006 in Iran, and was thought to have been shipped to Shiite militias for use against American forces shortly before being captured.

This morning, the Israeli Foreign Ministry was attempting to verify the source of the photo, which I provided to them.

The reason they were interested in that photo: The night of November 3, the Israeli Navy intercepted the MV Francop, an Antigua and Barbuda flagged cargo ship rented by a a freight company from Cyprus. The ship carried 36 shipping containers filled with roughly 500 tons of heavy weapons and ammunition.

Those weapons were intended for the terrorist group Hezbollah in Lebanon. Among the ordinance recovered were more than 570,000 rounds of small arms ammunition for sniper rifles and machine guns, 20,000 hand grenades, 3,000 recoilless rifle shells, thousands of mortar shells newly manufactured in Iran, and more than 2,700 rockets — including more than 2,000 Iranian-manufactured 107mm rockets: 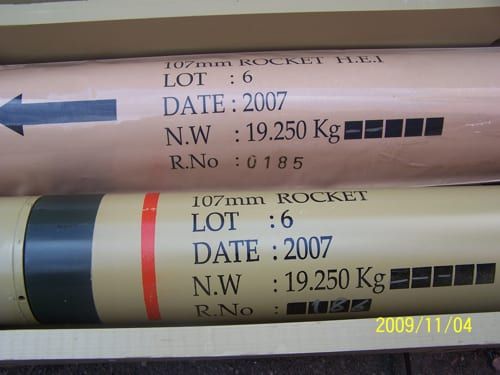 For now, the Obama administration is continuing the Bush-era policy of downplaying and ignoring Iran’s arming of America’s enemies. One can only wonder how many American soldiers will be on the receiving end of Iranian weapons before the administration decides to take steps to stop their arming of terrorist groups.