Infamous 'Shock Troops' Author Back in the News

Even the editor of the New Republic, Franklin Foer, announced a month previously in December that he could not stand behind Beauchamp’s stories. But just when we though it was all behind us, Beauchamp is back, (with his former fact checker wife still supporting him), courtesy of Spencer Ackerman in Radar magazine.

In “Notes on a Scandal,” Ackerman interviews Scott Beauchamp and Elspeth Reeve — and no one else — and shockingly comes to the conclusion that the magazine that fired Ackerman for his anti-war views was wrong to pull its support for a series of articles (“Shock Troops” was just one of three Beauchamp stories) that reinforced those views.

How did Ackerman conduct this investigation? He hung out with Beauchamp and Reeve at a bar and later communicated with them via email. What he did not do is present any evidence to support the contention that Beauchamp’s claims are true, or that Franklin Foer was wrong to pull support for stories that still lack on-the-record evidence of any kind.

On the first page of “Notes on a Scandal,” Ackerman attacks Michael Goldfarb, a McCain campaign blogger formerly of the Weekly Standard, for posting a claim that Beauchamp signed a sworn statement conceding that the events written about in “Shock Troops” were falsified. This was an error, as Beauchamp, to this day, has never recanted “Shock Troops.”

What his statements did prove is that Scott Beauchamp is either great at parsing language — or he lied.

I know another private who really only enjoyed driving Bradley Fighting Vehicles because it gave him the opportunity to run things over. He took out curbs, concrete barriers, corners of buildings, stands in the market, and his favorite target: dogs. Occasionally, the brave ones would chase the Bradleys, barking at them like they bark at trash trucks in America–providing him with the perfect opportunity to suddenly swerve and catch a leg or a tail in the vehicle’s tracks. He kept a tally of his kills in a little green notebook that sat on the dashboard of the driver’s hatch. One particular day, he killed three dogs. He slowed the Bradley down to lure the first kill in, and, as the diesel engine grew quieter, the dog walked close enough for him to jerk the machine hard to the right and snag its leg under the tracks. The leg caught, and he dragged the dog for a little while, until it disengaged and lay twitching in the road. A roar of laughter broke out over the radio. Another notch for the book. The second kill was a straight shot: A dog that was lying in the street and bathing in the sun didn’t have enough time to get up and run away from the speeding Bradley. Its front half was completely severed from its rear, which was twitching wildly, and its head was still raised and smiling at the sun as if nothing had happened at all.

I didn’t see the third kill, but I heard about it over the radio.

Beauchamp’s statement that he “didn’t see the third kill” is an indirect claim that the saw the first two as he described them, yet in his first sworn statement, before admitting to being the author, he wrote:

I have never hit a dog with a Brad or even wanted to. I swerve to avoid them. I’m a new driver, so I drive very carefully. I have just begun driving within the past couple of months and I have not seen a dog hit within that time.

Did Beauchamp never see dogs hit, or did he not see dogs hit within those “past couple of months”?

Ackerman’s biggest point of contention that Beauchamp’s stories may be true are the claims that five soldiers contacted the New Republic to vouch for the accuracy of the claims made in the article — but that none of the soldiers were willing to go on the record in the magazine for fear of retaliation by the Army. Ackerman himself presents no evidence that he spoke to a single one of these soldiers, so we don’t know if that claim has any merit, but I did get in touch with an officer yesterday involved in the saga who referred to claims of fears of retaliation as “a bald-faced lie.”

The claims made in “Shock Troops” — insulting a burned woman, wearing bones as a hat, running over dogs — are barbaric, but at best are minimal crimes if true. Punishment for even those soldiers involved in acts such as those Beauchamp described would be administrative punishments carried out at the base, while those who would have witnessed such acts would face no penalty for reporting them. Lying on a sworn statement, however, is far more serious, and could potentially result in a court martial and prison time. Does anyone seriously want to argue that 22 men would risk their careers and freedom to lie for Scott Beauchamp, a soldier who had gone AWOL on several occasions and who many of these men did not trust?

In addition, whistleblower laws protect witnesses of crimes, whether minor cases of cruelty as reported by Beauchamp, or murder, and we need look no further than Beauchamp’s own brigade for evidence proving this.

It was other soldiers in Beauchamp’s battalion that stepped forward and reported the far more serious crimes of executing captives. It is highly improbable that soldiers trained to do their duty would report their fellow soldiers for serious crimes, while men in the same battalion, presumably with the same training, would participate in a cover-up of far more minor violations, fearing non-existent reprisals, and risking their careers by participating in a cover-up to do so. The argument made by Beauchamp, swallowed so easily be Ackerman, is absurd.

And yet, Ackerman provides us with none.

Something else happened on the day that he was IMing with Lizza that would have important consequences in his story. Beauchamp was asked by army investigators to sign his name to certain statements. One confirmed that he had written the pieces for TNR. The other was seemingly an effort by the army to get him to backtrack on “Shock Troops.” “They asked me to answer two questions: Had I ever run over dogs with my Brad? And were there mass graves at COP [Combat Outpost] Ellis?” he says.

“I told them that I personally hadn’t run over dogs, and that human bones were found on Ellis. They asked me to change my statement to say animal bones … so in a lawyerly fashion I changed it to read, ‘some said they were animal bones.'”

The testimony, though true, in no way undermined the veracity of his article.

But that claim that they asked him to change his statement isn’t what Beauchamp’s actual statements support. 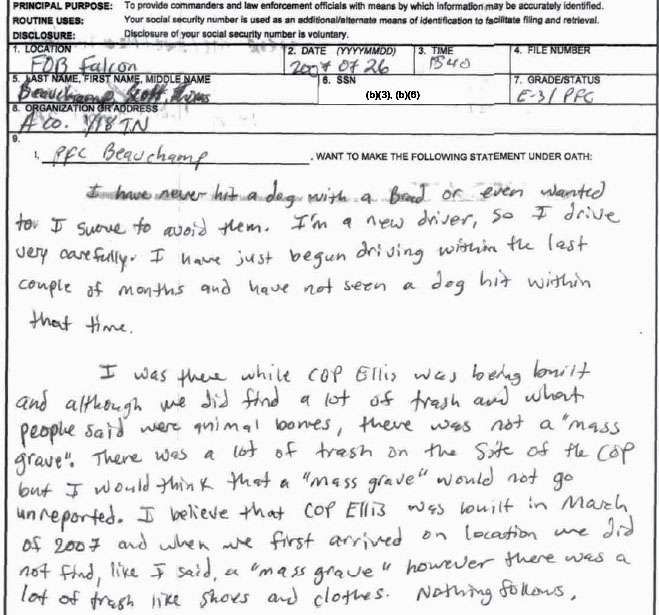 How did we know the statement admitting authorship was backdated? Because Beauchamp refers to the 1640 statement above in his second sworn statement, writing, “I also stand behind what I wrote in my last sworn statement.” 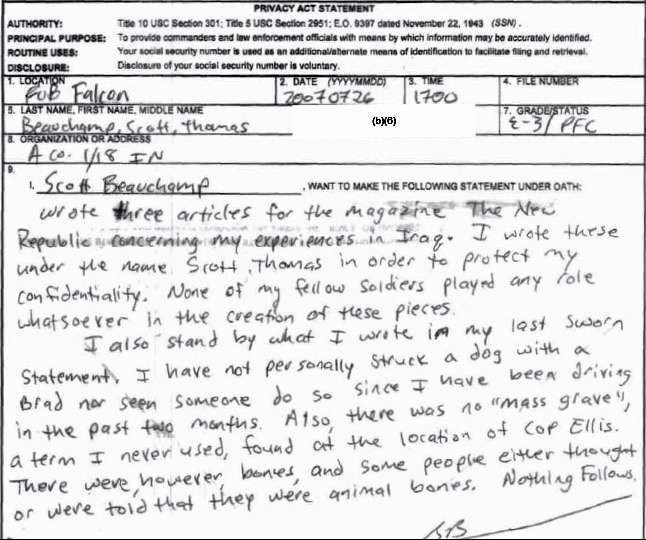 Digital copies of the sworn statements Beauchamp said reinforced his case — those he never released to TNR — were produced via FOIA request to the U.S. Central Command, and are online, as they have been since January 21 of this year. There are 22 in all. None provide evidence proving Beauchamp’s case, and as we know from the pending Article 32 hearings against four men in his battalion, his fellow soldiers are not cowards unwilling to come forward over non-existent threats of reprisals, and certainly wouldn’t risk their careers or freedom by putting themselves in a position where they could be caught in a lie.

Spencer Ackerman does a great job of parroting what Beauchamp has been saying all along, and manages to get a few digs in at the man who fired him as well. What he doesn’t do is prove his case.

All in all, perhaps his greatest accomplishment was getting this four-page non-revelation published.