How Iran Is Killing U.S. Troops in Iraq

American and Iraqi military forces have repeatedly claimed to have uncovered evidence that Iran is supplying both Sunni and Shia insurgent groups in Iraq with various munitions. Operations in Basra and Baghdad’s Sadr City slum in recent weeks have allegedly uncovered Iranian weapons manufactured as recently as this year, which would seem to preclude Iranian weapons having been obtained on the black market. Instead, it suggests the direct supply of belligerents inside Iraq with Iranian weaponry by the Iranian military with the knowledge of the Iranian government.

Among the deadliest of munitions thought to be exported by Iran to Iraqi insurgents are explosively formed penetrators, or EFPs. EFPs are not new to warfare, having been used with varying success since World War II. The basic EFP found in Iraq consists of a short length of closed tube roughly the size of a coffee can, an explosive charge, a detonator, and a concave copper disk. When the detonator triggers the explosive charge, the closed tube focuses the blast in such a way as to turn the copper disk into a high-velocity copper dart that can punch through thick armor.

A consistent shape of the copper disk contributes to the uniformity and lethality of the projectile. Rudimentary machine shops can turn out crude EFPs that work on lightly armored vehicles, but it takes advanced machine shops to turn out disks with the precision needed to form a copper dart that will penetrate the advanced armor used by U.S. forces. It is argued that Iraqi insurgents do not have the machine shops needed to manufacture such weapons, but that Iran’s military industry does. The kind of machinery used in the construction of the EFP’s copper disk leaves signature tool marks that can — along with a metallurgical analysis of the copper alloy used — provide evidence of an EFP’s origin as incriminating as a finger print, and experts claim that finger points to Tehran.

Why are EFPs a weapon favored by insurgents in Iraq? It is a matter of lethality and portability. Pajamas Media has obtained relatively rare photos of American vehicles targeted with EFPs and IEDs in Iraq, showing why these weapons are such a threat to American forces.

Early in the war, artillery shells were the primary explosives used to create IEDs. The larger artillery shell-based IEDs are still among the most deadly of weapons used by insurgent forces, and are capable of destroying most coalition vehicles if directly hit. Below are the remains of an American vehicle that was destroyed by an IED made from a large high-explosive artillery shell: 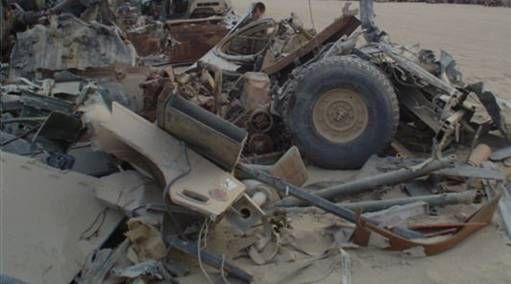 This pile of scrap metal was at one point an up-armored M114 Humvee before it was destroyed by a large artillery shell IED.

While brutally effective on even the largest American armored vehicles, IEDs made from large artillery shells are long and heavy, making them difficult both to transport and conceal. This kind of weapon is also a non-directional proximity weapon, meaning it must be placed very close to its target to have the desired effect. Hence, it needs to be buried in the road, or immediately off the side of the road, just feet from its target, to have its best effect. If the road is under observation by Iraqi or American security forces, there is a significant chance that those planting the IED may be killed or captured instead of successfully carrying out their attack.

EFPs do not have limitations as severe as other IEDs.

EFPs are much smaller and lighter than a conventional IED capable of piercing armor, and because they fire a projectile they can be placed further away and aimed at a target, often with devastating results.

This is an M114 up-armored Humvee hit with an EFP in the passenger-side front door: 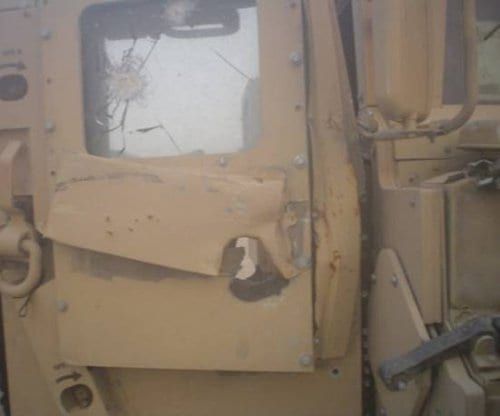 Note that the high-velocity copper dart fired from an angle slightly below and behind the vehicle entered the passenger compartment through the door and exited through the hood in front of the passenger-side windscreen: 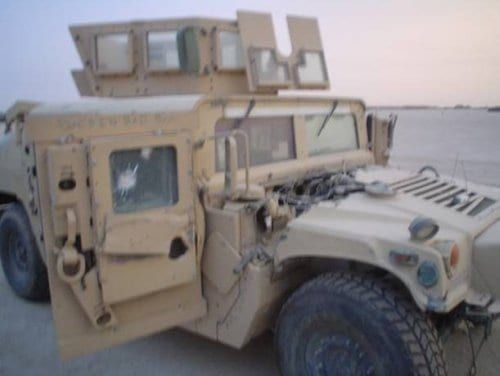 An interior view of the passenger side door shows how the copper projectile ripped violently through the door, fragmenting the interior door armor and causing significant damage before exiting though the dashboard: 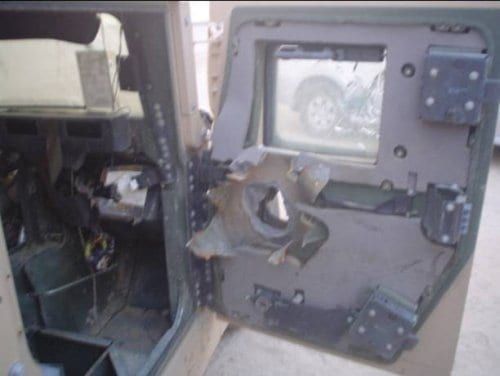 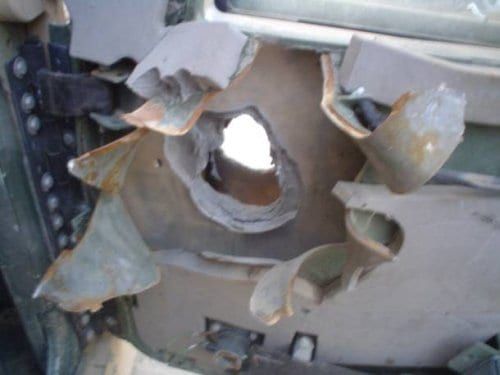 EFPs are favored by anti-coalition forces in Iraq due to their light weight, concealability, and lethality. It is the particular effectiveness in defeating advanced modern armor that may indicate that Iran is responsible for manufacturing and distributing weapons that have killed and wounded American soldiers.

It remains to be seen if the American government will continue to allow the Iranian plants manufacturing these weapons to exist.