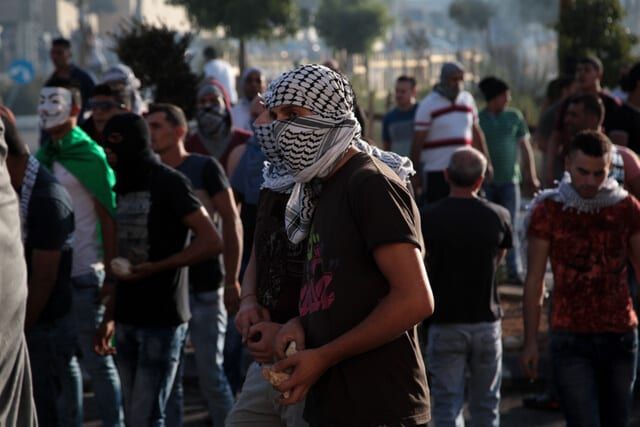 In his very first comment on the Torah, the famous 11th century commentator known as Rashi is bothered by why it should be that a book of Divine commandments and laws should begin with an account of the creation of the universe. He answers by quoting Psalms CXI,6, “The power of His deeds He has told to His people, to give them the inheritance of nations,” and goes on: “For if the nations of the world will say to Israel, You are bandits, because you conquered the lands of the seven [Canaanite] nations, [Israel] can say, The whole world belongs to the Holy One, Blessed is He; He created it and has given it to whomever He saw fit. By His will He gave it to them, and by His will He took it from them and gave it to us.”

Subsequently, the Torah goes on to record that G-d promised the Holy Land to Abraham and all his descendants (Genesis XII,7), a promise renewed in turn to his son Isaac and to his grandson Jacob. But He explicitly warns Israel, later in the Torah: “And you will keep all of My laws and all of My statutes and you will perform them, and the land whither I am bringing you to settle will not vomit you out” (Leviticus XX,22). As Talmudists say, Miklal lav atta shoméa hén: “From a negative statement we can understand its positive corollary”: the gift wasn’t precisely unconditional. If G-d owns the world and is the world’s landlord, then one has to adhere to His rules to retain the lease on a choice piece of real estate.

With this, we come to the latest phase of what the world is pleased to call the “Arab-Israel conflict,” expressed in a daily spate of shootings, rock throwing and knifings ever since the Jewish New Year began six weeks ago. The Jewish population is understandably traumatized. The incidents are not only taking place in Jerusalem and the West Bank: attacks have occurred in Tel Aviv, Ra’anana, Afula, in a kibbutz in central Israel and, most recently, the city of Beit Shemesh. Though government authorities are trying hard to respond to this latest security challenge of “lone wolf” attacks openly encouraged, aided and abetted by both Hamas and the Palestine Authority of Mahmoud Abbas, people are scared.

So some interesting measures are being taken in some quarters which don’t require the deliberations of Netanyahu’s security cabinet, permission from the Israeli Supreme Court or new military deployments.

One phenomenon in recent weeks has been a rash of videos uploaded on Israeli Facebook pages of young women who might previously have been seen clad in tank tops, jeans or very short skirts tearing up such clothes and vowing to dress more modestly. One young woman (as reported in Haaretz, perhaps best described as the Israeli equivalent of the New York Times) says specifically that what is going on in Israel “isn’t easy to watch,” and expresses the hope that if “all the young women of Israel” follow her lead, perhaps some measure of Divine mercy will follow.

Another group, the Iggud Rabbanei haQëhilloth (“Union of Community Rabbis”), is meeting the crisis by calling for people to check their mëzuzuoth or install new ones if they had not previously had them, complete with videos featuring current government ministers and members of Knesset, as well as ordinary citizens, extolling the virtues of the mëzuza on their Facebook page. These are little boxes containing hand-written parchments featuring the verses of Deuteronomy VI,4-9, which ends with the commandment: “And you shall write [these words] on the doorposts of your house and on your gates.” Jewish tradition assures us that affixing mëzuzoth guards our homes and their occupants from evil.

All of this is, of course, accompanied by many and varied calls for congregations to redouble their efforts at communal prayer, for gatherings to recite Psalms begging for Divine mercy, and for renewed and strengthened efforts in all areas of religious observance, in Israel and in Jewish communities worldwide.

The article in Haaretz reports these occurrences with an air of amused secular detachment, asserting that “linkage between Orthodox belief, practice and safety is insulting to the Jews who continue to be murdered and injured in the latest rounds of violence. There is likely nowhere in the world with a greater proportion of Jews devotedly observing their religion’s religious rituals than in Jerusalem and West Bank settlements. If keeping kosher, observing the Sabbath and dressing modestly was, in fact, any kind of form of protection against pain and suffering, wouldn’t it be the ‘sinful’ Sodom and Gomorrah of Tel Aviv that would be under attack?”

The answer to the tongue-in-cheek question is, “No, not really.” After all, another essential piece of Jewish tradition is Kol Yisra’él ‘arévim zeh lazeh, “All Israel (the nation, wherever resident, not specifically the modern state by the same name) are responsible for one another.” The prayers and the observances of us all matter, and it is in this spirit that the efforts of these young ladies, the renewed calls for greater shabbath observance, etc. are to be viewed. The shameful resolution before UNESCO seeking to reclassify the Western Wall, the last surviving remnant of the temple complex in Jerusalem, as a “Muslim site” should serve as a sharp reminder that Israel’s most important ally is not any earthbound nation.

Yes, King David had an army, battle-hardened and doubtless well-equipped for his day, but it was that same King David who wrote: “Some rely on the chariotry and some on the horses, and we shall mention the name of Ha-Shem our G-d” (Psalms XX,8).

By all means, ladies, tear up those clothes, and get ready to light the sabbath candles.