Israeli polling published Friday seems to indicate that the Obama administration’s push to remove Binyamin Netanyahu from power and to replace him with the more pliable Yitzhak (“Buji”) Herzog is backfiring. The intervention was first reported by the left-leaning newspaper Haaretz just over a week ago.

This is how the numbers look as of Friday: 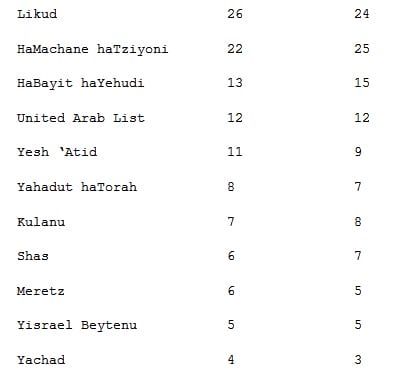 This is the most significant lead either of the front-runners has had since this election cycle began. Previously, Likud or HaMachane haTziyoni had led the other by only one or two seats. If the final election results look like this, the most likely governing coalition will involve Likud, HaBayit haYehudi, Yahadut haTorah, Kulanu, Shas, and Yachad (64 seats out of a total 120).

It should be noted that such a coalition, incorporating not only the right-wing Bayit Yehudi but also the nationalistic Yachad, would be on a collision course with the EU and U.S. as the party platforms now stand.

Yachad in particular would tie Netanyahu’s hands and limit his flexibility in ways he would not find congenial. The Yachad party is comprised of three elements: loyalists of former Shas head Eli Yishai, who heads the list; religious Zionist elements disappointed with the secular nationalistic constitution forced upon Bayit Yehudi by Naftali Bennett, who in consequence left that party under Yoni Chetboun; and the radically national ‘Otzma Yehudit faction, who had not joined HaBayit haYehudi when Bennett created the current party out of two smaller, earlier ones because it was insufficiently nationalistic for them.

A split between the Yishai/Chetboun faction and ‘Otzma Yehudit under the strains of coalitionary negotiations appears likely, which would yield a smaller but more wieldy coalition for Netanyahu (probably 62 seats as of this writing).

To show how regional Israeli politics is (and therefore how important proportional representation is to the results), an event held Sunday at Tel Aviv University is instructive. The Ministry of Education invited 1,000 high-school seniors who will be first-time voters in the March elections to hear a panel consisting of Yuli Edelstein of Likud, Naftali Bennett of HaBayit haYehudi, Ya’ir Lapid of Yesh ‘Atid, Moshe Kachlon of Kulanu, Aryeh Der‘i of Shas, and Zahava Gal-On of Meretz.

The question before the house was: “How do we ensure that the next government will succeed?” Each speaker was given 20 minutes to pitch his/her party platform to the students. The most controversial speaker was the last, Bennett, who spoke of a perceived downward spiral in Israel’s internal security in recent years, such that residents of the Negev cannot even park their cars without fear that Arabs would steal their belongings.

At the mention of Arab thieves, Arab students, together with a group wearing Meretz T-shirts, demonstratively walked out. Bennett appeared unfazed, and retorted that the Left always runs rather than confronting reality.

The walkout was not unexpected. Tel Aviv, Israel’s second largest city, is a hotbed of Leftist sentiment. The straw poll conducted afterwards showed HaMachane haTziyoni was the clear front-runner with 36% of the student vote, followed by HaBayit haYehudi with 12.4%, Kulanu with 11.34%, and Likud with 9.28%.

Since the population of the Tel Aviv-Yafo municipality is a bit over 400,000, if those figures are indicative of the whole, 12.4% of 400,000 is 49,607, about enough for one Knesset seat for Bennett, given that Israel’s electoral turnout is traditionally between 60-80%. Were the municipality to be a district along the lines of the American system, all those voters would be disenfranchised.

To give you a flavor of the creativity in Israeli election advertisements, this is a Likud ad currently running on Israeli television: